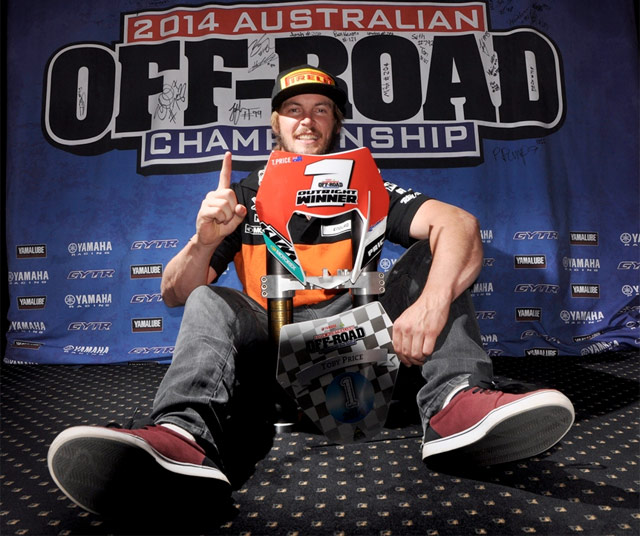 In a record-breaking season, KTM Enduro Racing Team rider Toby Price has become the first rider to win a fourth career AORC title, as the Australian Off-Road Championship concluded this weekend at Heathcote in Central Victoria.

Riding a KTM 450 EXC, Price took a 28-point lead into the double-header final and put the issue to bed on Saturday with an unlikely win that aptly illustrated just why he is one of Australia's most respected off-road racers all time.

Price recovered from a poor start to slowly pick his way through the dust and the traffic, eventually breaching a 30-second gap to leader Activate Yamaha's Beau Ralston and wresting the lead away with just two laps to go.

With the number one plate securely in his keeping Price finished second on Sunday behind CDR Yamaha's Daniel Milner and ahead of Ralston, to cap off an incredible year which has seen him contest both desert and off-road racing calendars, finishing second in the KTM Enduro-X series and A4DE, and winning at Hattah, Finke, in the WA Desert Tri-Series, and now, in the AORC as well.

‰ÛÏIt‰Ûªs awesome! This year has just flown by that quick, and before we know it, we've done everything." Price commented. "I'm over the moon, the whole KTM team has worked really well, and helped me achieve my goals that I had, which was to get back on the bike after the injury last year and try to win races again.

"I didn't think winning a championship would come again so soon, but that‰Ûªs what we strive for. I definitely wanted to win that one yesterday and get everything done and dusted. And it worked a treat.

"The 6-day is next, but I'll have a little bit of a break and let a few things heal up first. And then we‰Ûªll be good to go.‰Û 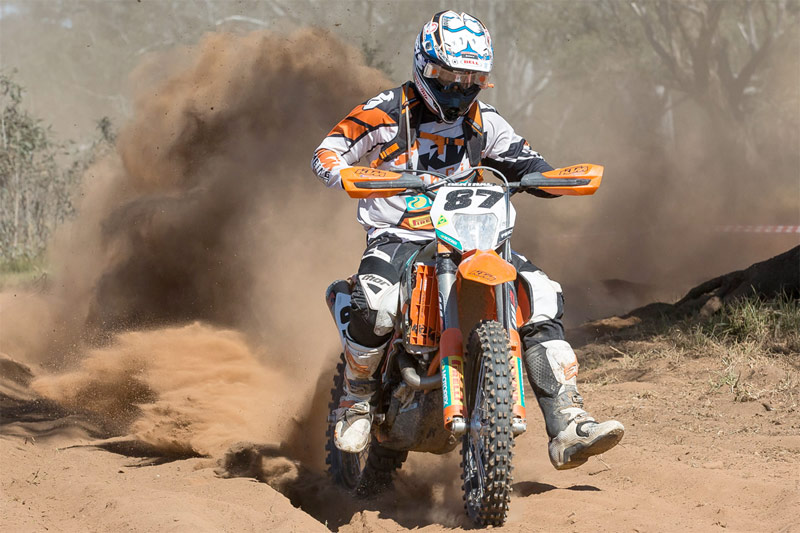 Toby Price on his way to both the 2014 AORC Outright and E2 crowns - Credit: Fourohfour
KTM Enduro Racing Team Manager Brad Williscroft was relevied to see Price wrap up the title on Saturday, leaving him to enjoy the final round of racing for the season on Sunday.

‰ÛÏToby rode awesome yesterday, he had a bad start and just worked his way up from around tenth, and by the time he got into second, he was 30 seconds behind Beau Ralston." Williscroft said on Sunday afternoon. "Travis and Mick did a super-fast fuel stop for him and he came out just 17 seconds behind. He got real close, dropped it, then caught him again and with two laps to go he got into the lead and held it.

"He wrapped up the championship up early and it was a big relief. It's been a long season, with a lot of hard work by the whole team, and he's just been unbelievable how he‰Ûªs ridden.

"He's had a few injuries, but he has pushed through, and we got points when we had to, and we got the wins when we were feeling good. He never gives up, and it doesn't matter what sort of track it is, he seems to adapt quickly to every sort of surface. He's just a talent. One-of-a-kind really." 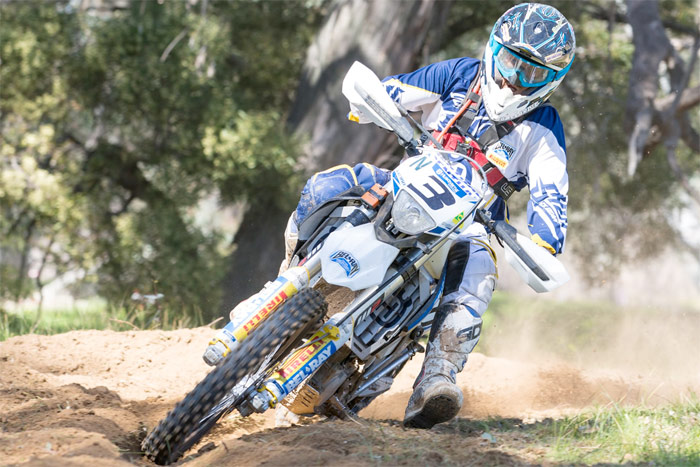 Just three weeks after the team won two Australian Enduro Championships at the four-day, Team Manager Glenn Kearney took his career-first AORC title when he powered his Husqvarna FE 501 to two more demonstrative victories in the E3 category, keeping alive a winning streak that was begun at round three.

In fact Kearney dropped just one class win from the 12 rounds, when he suffered his worst finish of the series - a second place at Bulahdelah.

‰ÛÏReally stoked to get the win in the class and wrap the championship up yesterday."Kearnery enthused on Sunday evening. "It's actually my first AORC championship, because it didn't exist when I went to America.

"But to have everything come together with managing the team, finishing on the outright podium, and winning the class is great.

"Together with Lachy riding so well all year, and Scotty finishing second in E1, and Damo obviously dominating the vets, I think it was a really good first year for the team, and I couldn't be happier really as Team Manager.‰Û 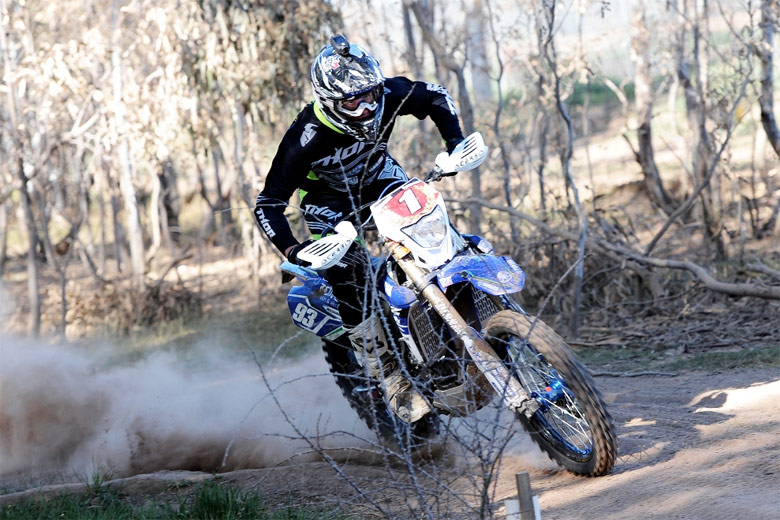 "Wrapped up the Pro E1 championship today, had a pretty tuff day going down on the first lap but charged hard for the whole 3 hours and came back to 7th outright and 1st E1." McCormack stated via his social network accounts after wrapping up the title on Saturday.

"Happy to get my first Aorc class Championship. It's time take some time off and come out swinging next year and chase those outright results. Big thanks to the Active8 Yamaha yamalube team it's been a great two years working with you guys," he added.

The under 19s competition was dominated by KTM mounted Daniel Sanders in 2014, with the first year senior rider impressing not only with his under 19s title but also finishing the season 6th in the outright standings showing he will be a rider to contend with in the coming years.

Serco mounted Jessica Gardiner wrapped up the Women's championship ahead of Emelie Karlsson who pipped Tayla Jones by a single point to secure second place for the year.

"I did it! I am your 2014 Australian Offroad Women's Champion!," Gardiner commented on Facebook after wrapping up the title. "The Day win along with an overall Aussie championship win with the guys winning there respective classes today too! Congrats Toby Price, Glenn Kearney, Tom McCormack, Daniel Sanders and Damien Smith!.

"Very excited to have won the first ever Australian Offroad Championship title for Sherco Australia too!

Thanks to FunnelWeb for keeping my Sherco dust free as a lot of competitors dusted there bikes out on the extremely dusty track today including my main competitor and friend Tayla Jones- I'm devastated for her dnf but know she will be back strong tomorrow with her super speed!

"I can't thank everyone enough around me, and everywhere for there help and support. To my family and amazing sponsors for making this possible for me!! 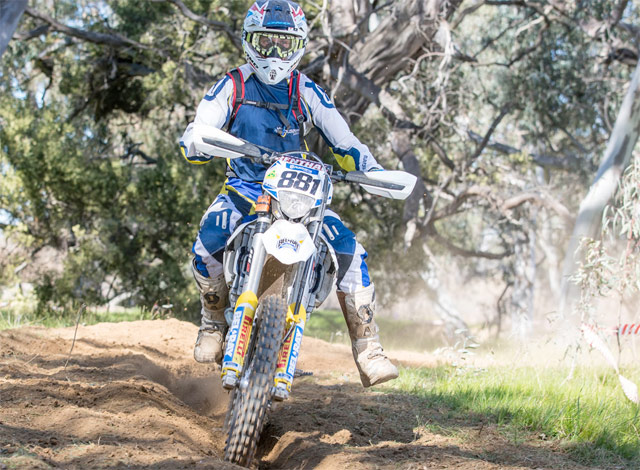 Today's ride was Smith's last in AORC competition, the 39-year-old Central Coast rider and seven-time Australian champion winner has decided to scale back his activities for 2015, and he was solemnly and respectfully recognised by his peers at the end of his final circuit today, with a guard of honour ‰Û_and a dunking in the nearby dam!

‰ÛÏI was pretty happy to wrap up the title yesterday and take the pressure off a bit, and then have a bit of fun today." Smith commented. "I got the guard of honour as I came through the last round today, which was pretty cool.

"Pretty much all the pro-boys just made a big arch, then threw a bucket of water over me and threw me in the dam! It was one of the best things ever, like I had just won a world title or something. But it's been great - to get the four-day and the AORC title for Husky. We‰Ûªve had a terrific season.‰Û