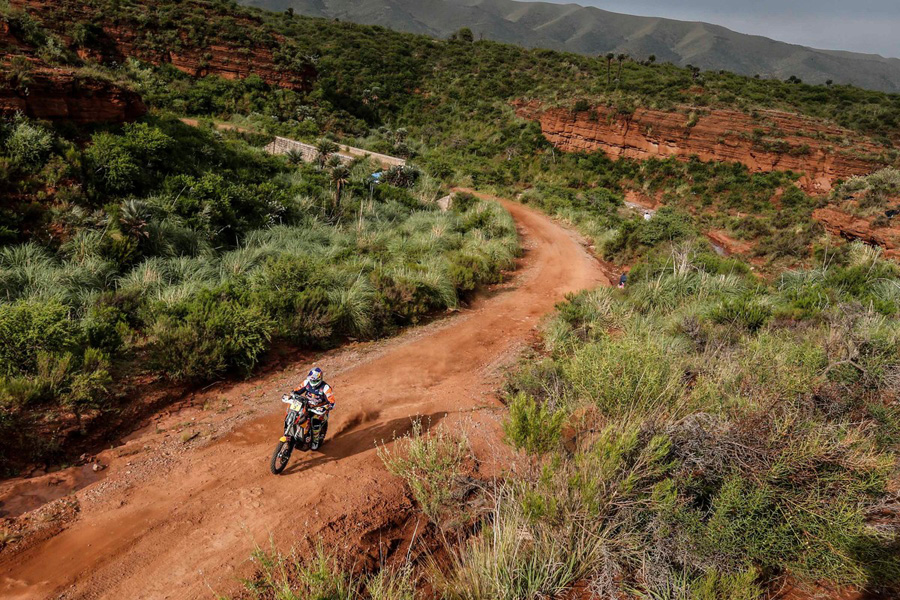 After a short prologue and a cancelled first stage, the Dakar genuinely kicked off between Villa Carlos Paz and Termas de Rio Hondo overnight.

On a quick stage without significant navigational difficulties, Redbull KTM's Toby Price was the first to leave his mark on the race with his second stage victory on the Dakar.

With a place on the final podium on his first Dakar, Toby Price is determined to reach a new dimension on the 2016 edition.

The Australian lost no time in confirming his ambitions of outright victory in Rosario by winning the first veritable stage of the rally.

"It was a weird way to start the Dakar yesterday." Price commented. "We didn't even get to run the course and everything got cancelled, so actually today kicked the Dakar off and getting going is unreal.

"I got through that stage pretty clean and pretty comfortable so we're in a good position for tomorrow. It should be fairly similar to what we had today and then day four is when it kicks in with a bit of hard navigation. But we're excited and it's good to be back here. I

"It was a long wait and a long stage, around 350 kilometres. We were lucky that had about fifty kilometres taken out of the section. It was a long day in the saddle but, for sure, it's started well for us. We're just looking forward to tomorrow now.

"We'll make sure we look after the bike. There was a bit of mud out there today, so we'll give it a good clean up and Joe will do a really good job, so we look forward to kicking it off again tomorrow.

"It will be a little more difficult, for sure, but we'll take off and get going and take our time with it tomorrow to make sure we make all the right calls.

"Today was really easy navigation and we had a few tracks we could see, plus the route was pretty well marked. Tomorrow should hopefully be fairly similar, except for the tracks: tomorrow I'll be making the trail. For sure, we're excited and keen to see what the day can bring.

"We hope were up for the title. That's what we've come to the Dakar for, to be a title contender, but you've got to have a perfect race go your way for the two weeks. Today was only pretty much day two, but realistically it's day one, so we've got a long way to go. We've just got to make sure we keep cool, calm and collected.

"It's good to get one stage win out of the way, but we're looking forward to being smooth and consistent the rest of the week and see how we go‰Û