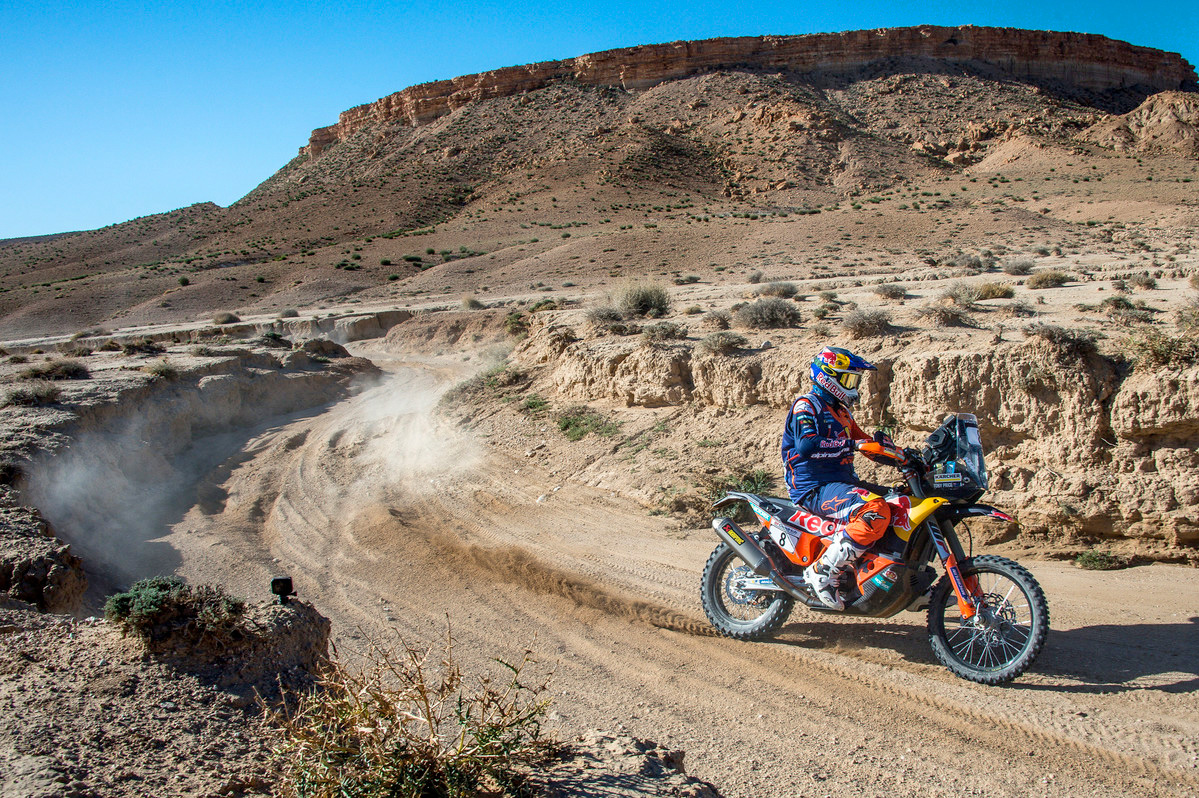 Toby Price has taken the early advantage as he tries to claw back an eight point lead by defending Cross-Country Rallies World Champion Pablo Quintanilla for the 2018 title . Photo: Rally Zone
Toby Price has continued his front running form by winning the first stage of the 2018 Rally du Maroc after topping the competition in the opening Prologue yesterday.

Stage one was virtually a repeat of the Prologue with Matthias Walkner and Sam Sunderland once again making up the top three with Walkner and Sunderland third. Honda's Paulo Goncalves and Ricky Brabec rounded out the top five while defending champion Pablo Quintanilla was down in 12th.

Monster Energy Honda Team‰Ûªs Argentinean rider Kevin Benavides had a serious accident at kilometre 395. After receiving medical assistance on track, he was transported to the hospital in Errachidia in ambulance where he underwent further analysis which revealed no significant injuries. 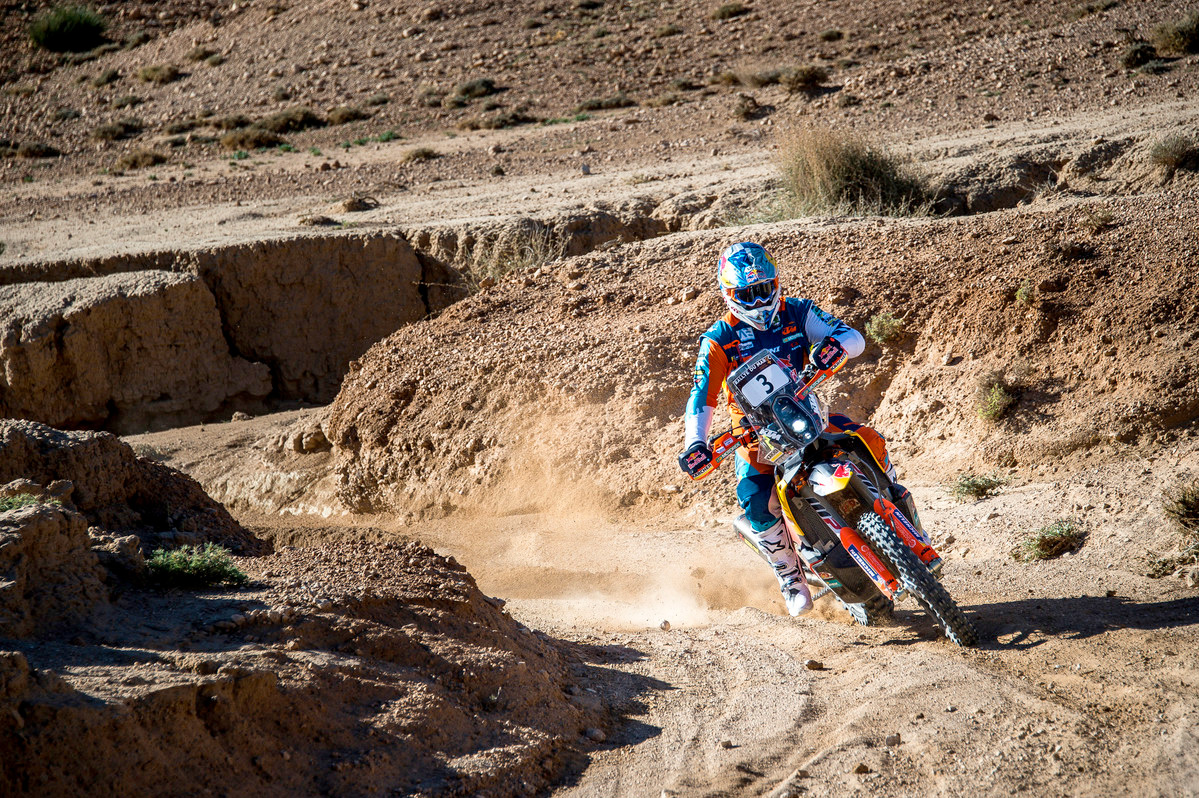 Matthias Walkner was once again second. Photo: Rally Zone
Comprising two timed specials, day one of the rally proved to be more of a challenge to all riders than anticipated. Heavy rain on the lead up to the event had caused a lot of the tracks to be far more difficult to follow than expected and as such accurate navigation was important to secure a top stage result. Featuring a hard-pack surface littered with small rocks and stones that made for very slippery riding conditions, stage one was a real test for both riders and machines.

Following his Prologue victory, Toby Price had first pick of today‰Ûªs start positions and chose to set off as the 15th rider away on the day‰Ûªs timed special. Catching the riders in front throughout the two-part stage, Price ultimately finished over two-and-a-half minutes ahead of Matthias Walkner. Earning himself the task of opening Saturday‰Ûªs Stage Two, the Australian will be aiming to keep to a strong pace and lose the minimum of time to the chasing riders.

‰ÛÏI made a few little minor mistakes today but I‰Ûªm happy overall with how I rode," Price said. "I had another issue with the GPS where it said I was missing a waypoint, but there was no possible way to be off-track there as the route took us right next to a big concrete canal that was shown in the road book and we were in the speed zone too. Things like that can be a little bit confusing, but all-in-all everything went well. I‰Ûªll open tomorrow‰Ûªs stage so there‰Ûªs a good chance of losing some time, but I‰Ûªll keep pushing and see where we end up.‰Û 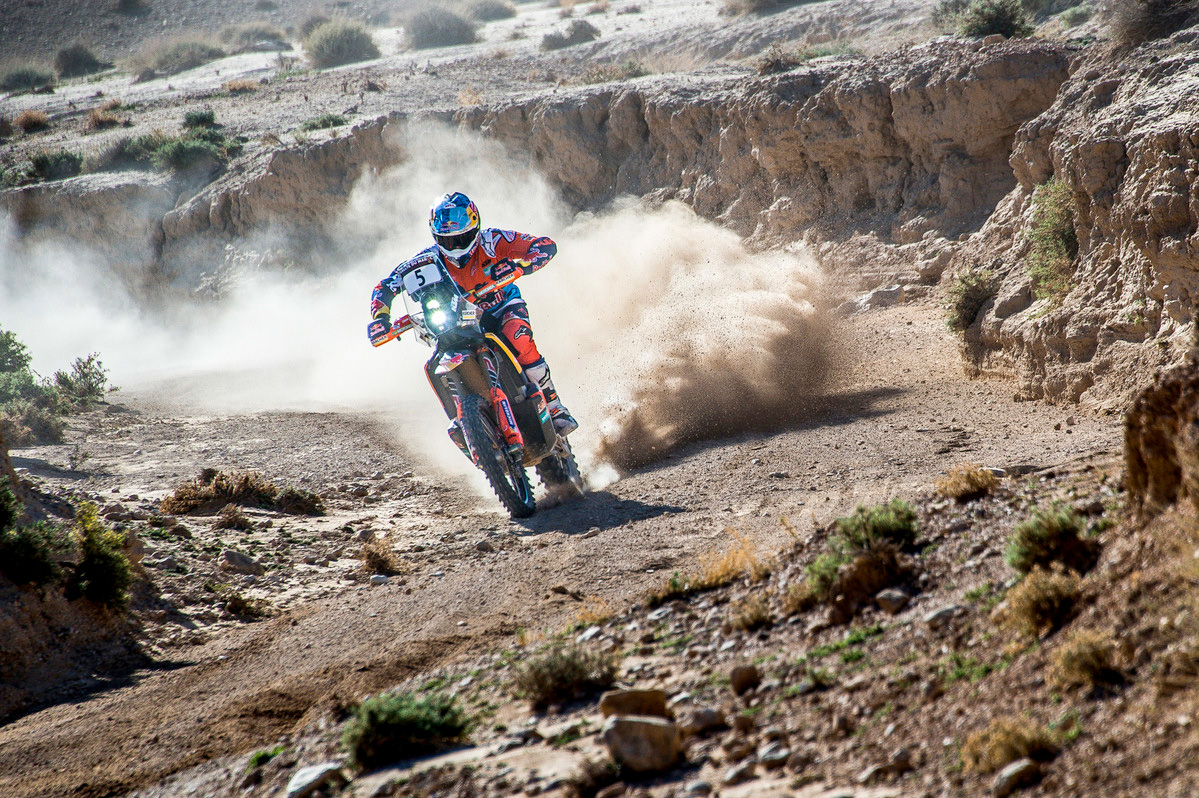 Sam Sunderland. Photo: Rally Zone
Matthias Walkner, after a steady start to the stage, soon found a good pace and was able to maintain that speed to the finish and cross the line as runner-up. Taking care to minimise mistakes on the navigationally-challenging stage, Walkner adapted his style to suit the slippery conditions and will be keen to claim another strong result on tomorrow‰Ûªs 317-kilometre Stage Two.

‰ÛÏI didn‰Ûªt feel so good this morning, I was a little bit tired and so to take second on today‰Ûªs stage is great," Walkner said. "We have been riding a lot of sand dunes in the last couple of races so it takes a while to get used to the hard-pack tracks and rocks here in Morocco. I started to find my rhythm about 40 or 50 kilometres into the stage and felt better after that. Navigation was tricky, but it seems everyone had similar issues so I am happy with how the day went today.‰Û 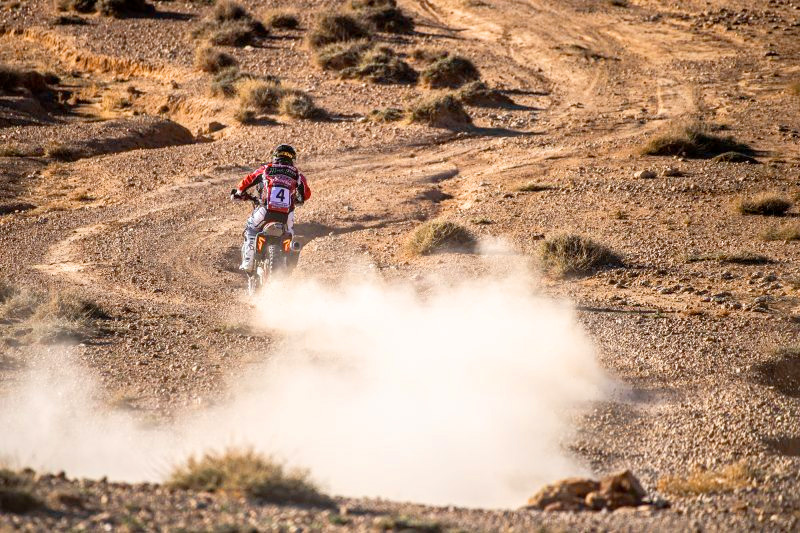 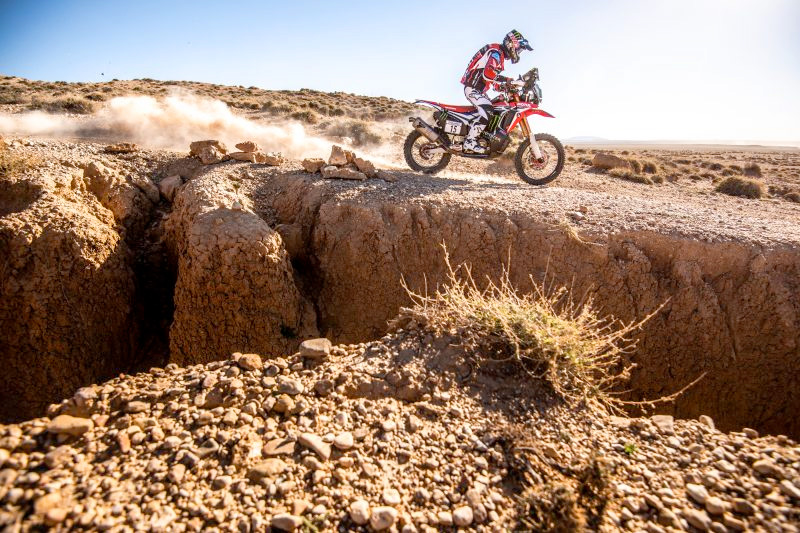 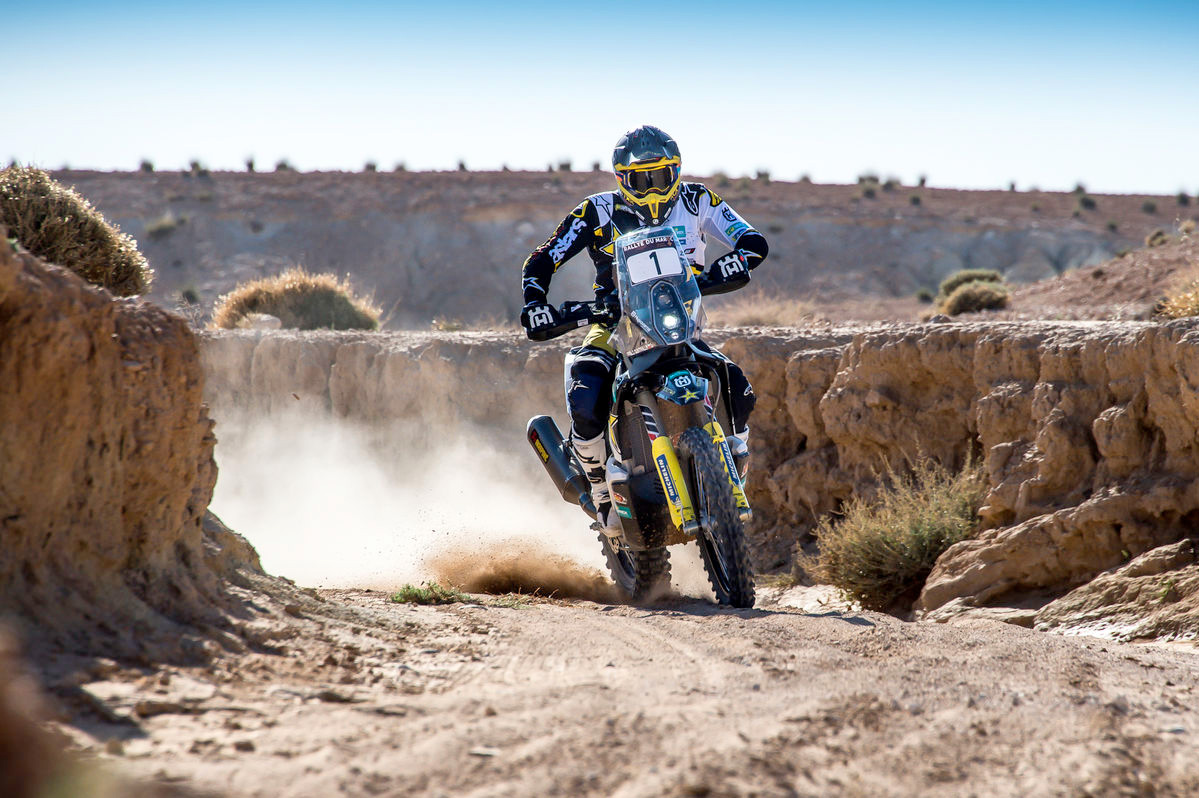 Defending Cross-Country Rallies World Champion Pablo Quintanilla has some work to do after finishing stage one in 12th place. Photo: RallyZone
For defending Cross-Country Rallies World Champion Pablo Quintanilla, stage one proved to be a challenging one. Suffering small navigational mistakes, the Chilean rally star posted the 12th fastest time for the day. With four more long stages to go, Pablo is already looking ahead to the remainder of the race.

‰ÛÏIt was a challenging stage for me," Quintanilla lamented. "I made some mistakes and ended up losing time. The stage was tricky, there were a few parts that were difficult to find the right routes. There was probably too much rain the last few days and this has affected the tracks. I think it will be more or less the same for the remainder of the race, so we should do our best to adapt to these conditions. I will continue doing my best. It‰Ûªs crucial to remain focused and reduce mistakes. The race still has a long way to go and I want to take advantage of every opportunity I get to make up for the time lost today.‰Û 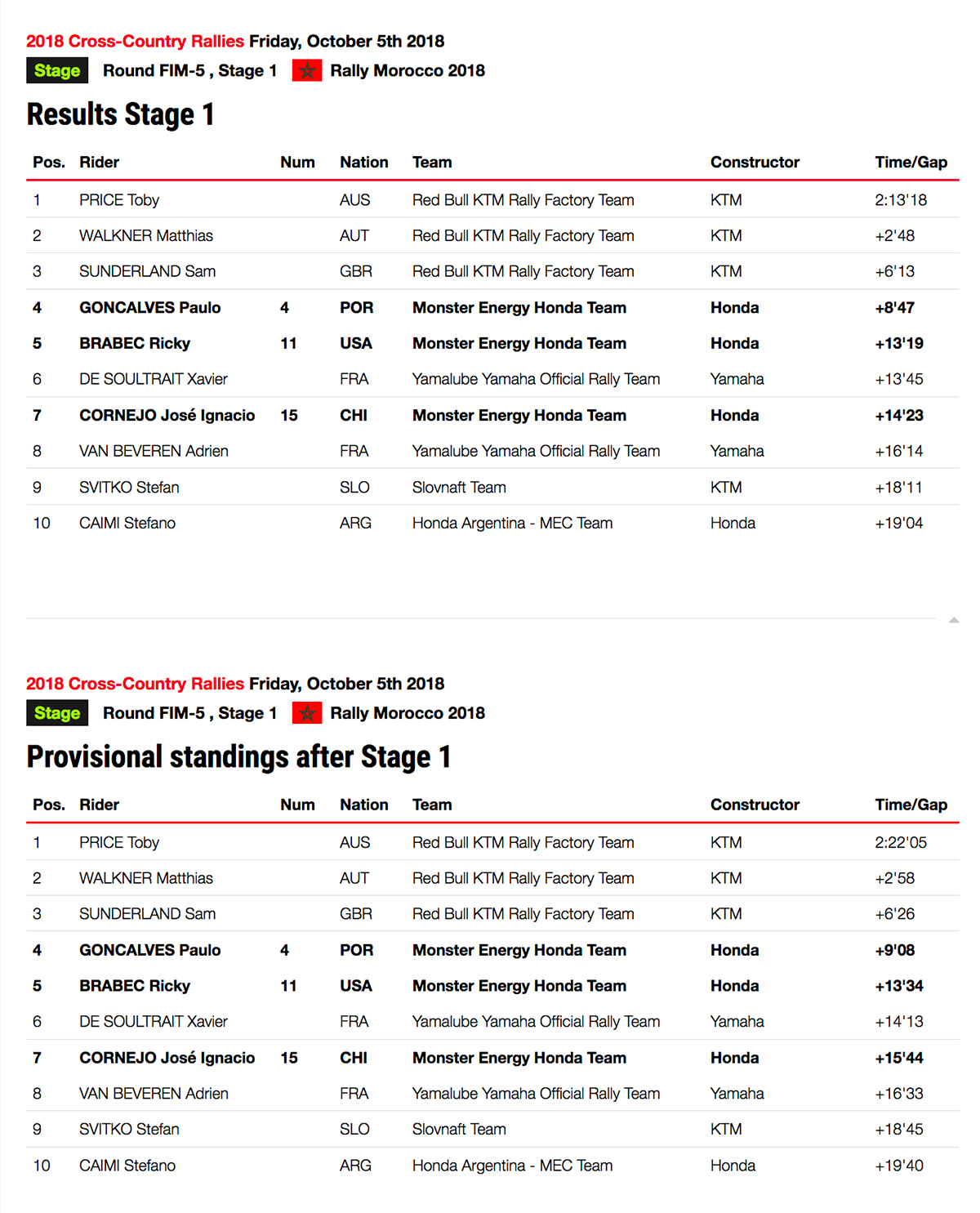