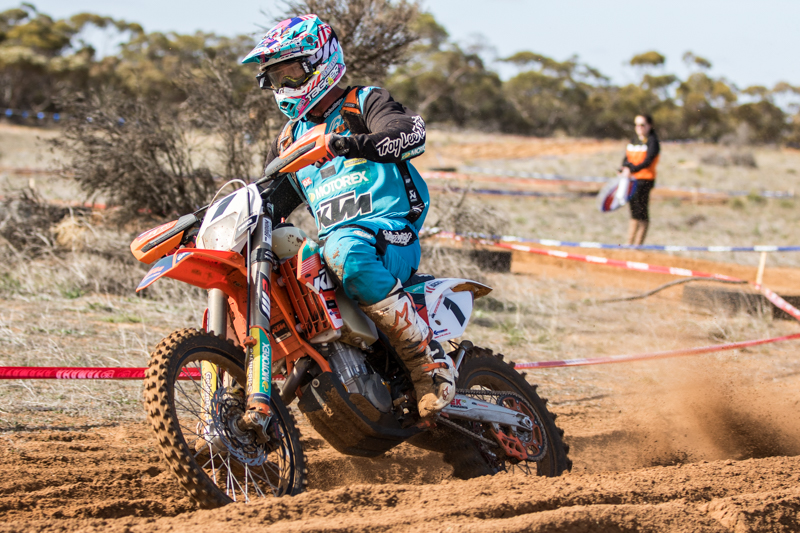 Price, who also took out the E3 class win in the process, was the leader of a KTM assault on the upper end of the field that also included teammates Tye Simmonds (E2 Class winner) in second and Daniel Sanders in third.

Rounding out the top five was CDR Yamaha‰Ûªs Chris Hollis, who rebounded strongly following his fall in the Round 3 cross country at Hedley, and Active8 Yamaha‰Ûªs Josh Green who claimed his fifth consecutive E1 class victory for the season.

The battle of the KTM trio was the highlight of the day, with both Simmonds and Sanders taking turns in the lead in the early stages of the race, before the four-time AORC champ assumed the lead and never looked back.

Scott Keegan was the most notable casualty for the day when he suffered a suspected concussion in a crash on lap four.

The Husqvarna Privateer was up and communicating with officials soon after the accident and is still considered a chance to saddle up for Sunday‰Ûªs sprint round.

In the other classes, Bolton‰Ûªs KTM rider Tom Mason claimed his fourth Transmoto 19 & Under class victory for the season, finishing ahead of Jack Gaynor and Peter Daniel Allen.

In the Women‰Ûªs class, Yamaha Racing‰Ûªs Tayla Jones made it five from five for the year ahead of Jess Gardiner on her ShercoAus Ballards Motorex Off-Road entry. Yamaha‰Ûªs Emelie Karlsson rounded out the girls‰Ûª podium in third.

Robert Day was the standout rider in the Masters' class, while Kirk Hutton mirrored the efforts of Green and Jones to win his fifth AORC round on the trot for the season.

In the juniors, Fraser Higlett (J4) and Mitchell Brierley (J2) both recorded their fourth round victory out of five this season to extend their outright lead on top of their respective classes, while local South Australian rider Liam Mason took out the J3 section.

The sixth round of the 2015 Yamaha Australian Off-Road Championship will again take place in Wanbi tomorrow, with riders turning their attention to the sprint format.