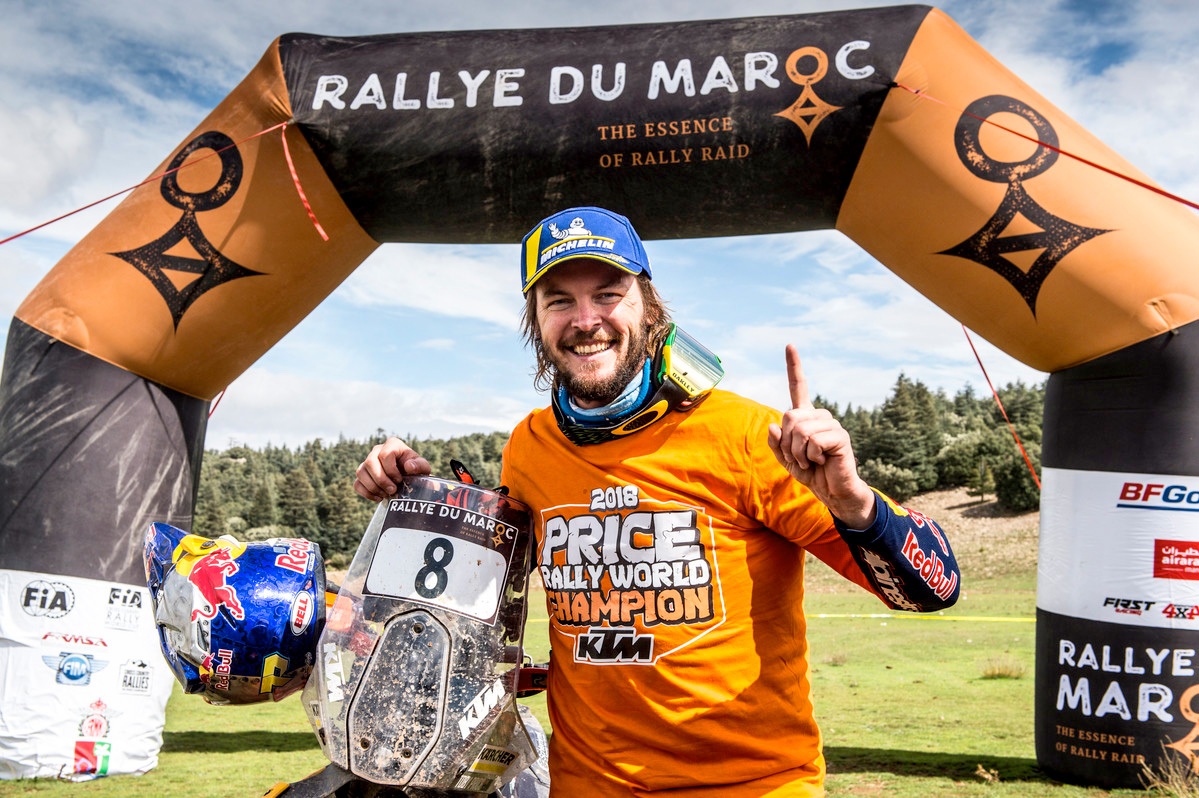 Second on the final stage behind Honda's Ricky Brabec was enough for the Moroccan round win which elevated the former Dakar winner to the top of the championship standings, allowing the Australian to claim his first ever world title.

Winning two of the five stages of the Rally du Maroc, as well as the short, opening Prologue, Price secured the overall win ahead of Mathias Walkner with a comfortable margin of over seven minutes. With his nearest title rival Pablo Quintanilla finishing in fourth place overall, Toby leapfrogged the Chilean rider in the standings to claim the championship by a six-point margin. 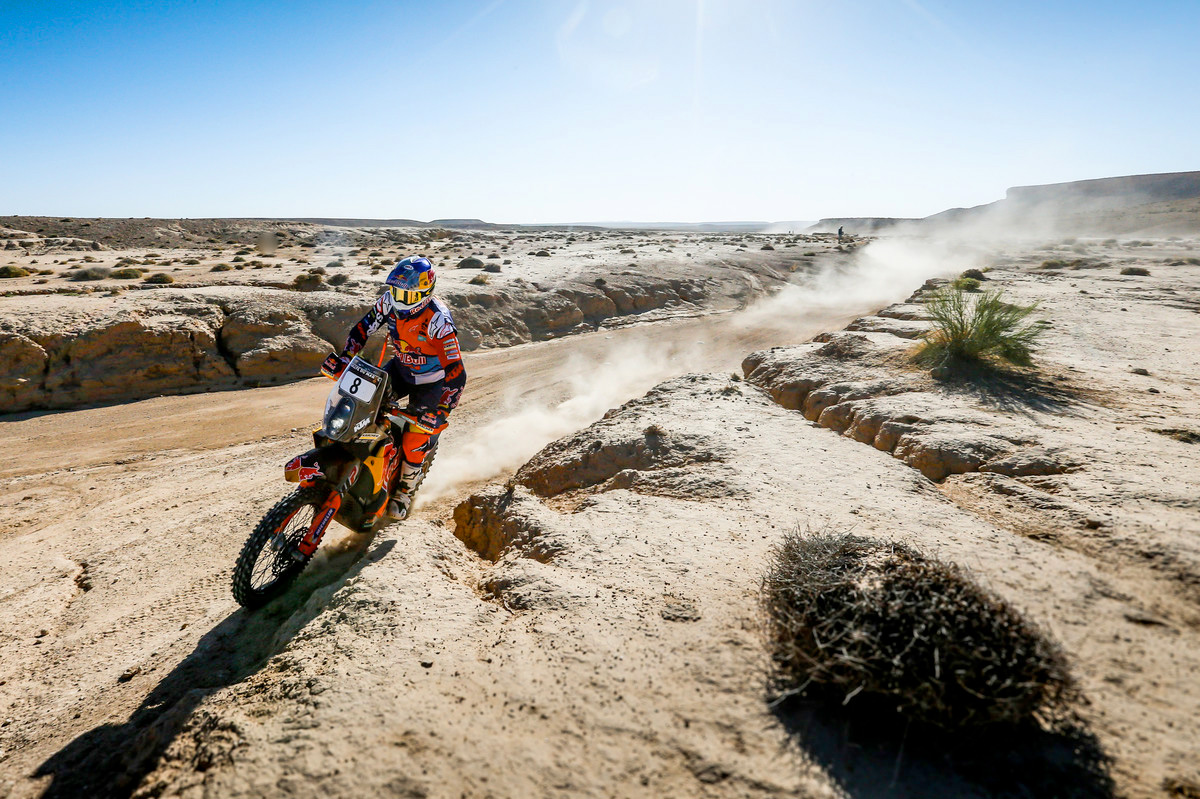 The 2018 FIM Cross-Country Rallies World Championship Toby Price on the way to victory. Photo: Rally Zone
Toby's journey to the 2018 FIM Cross-Country Rallies World Championship title has not been an easy one. A crash at the 2017 Dakar Rally forced him to retire early from the event with Price subsequently spending much of the year recovering from the broken femur he sustained. Returning to competition at the 2018 Dakar last January, Price impressed with his outright speed, ultimately taking two stage wins and finishing in third position overall.

Riding with great consistency throughout the 2018 season has paid off for Price. Multiple stage wins as well as podiums at the Atacama Rally and Desafio Ruta 40, added to his win in Morocco, have resulted in the 31-year-old becoming a worthy 2018 FIM Cross-Country Rallies World Champion.

‰ÛÏWhat an amazing season ‰ÛÒ I can‰Ûªt believe it," Price said. "It‰Ûªs been a tough one and I didn‰Ûªt expect to be at the top of the list at the end of it. I had some bad luck back in Abu Dhabi at the beginning of the year, but after that every rally has gone well and I‰Ûªve finished on the podium at every round. To win the world championship with a win here in Morocco makes it all that little bit sweeter. If I am honest, I was nervous out there on the final stage today, there are no guarantees in rally racing, especially when I had to lead the stage out. This is my first world championship in any category so I am so, so happy. It‰Ûªs all credit to my team and everyone at Red Bull KTM, without them behind me I wouldn‰Ûªt be standing on the top step. I‰Ûªm standing on the top of the world and it‰Ûªs the best feeling ever.‰Û 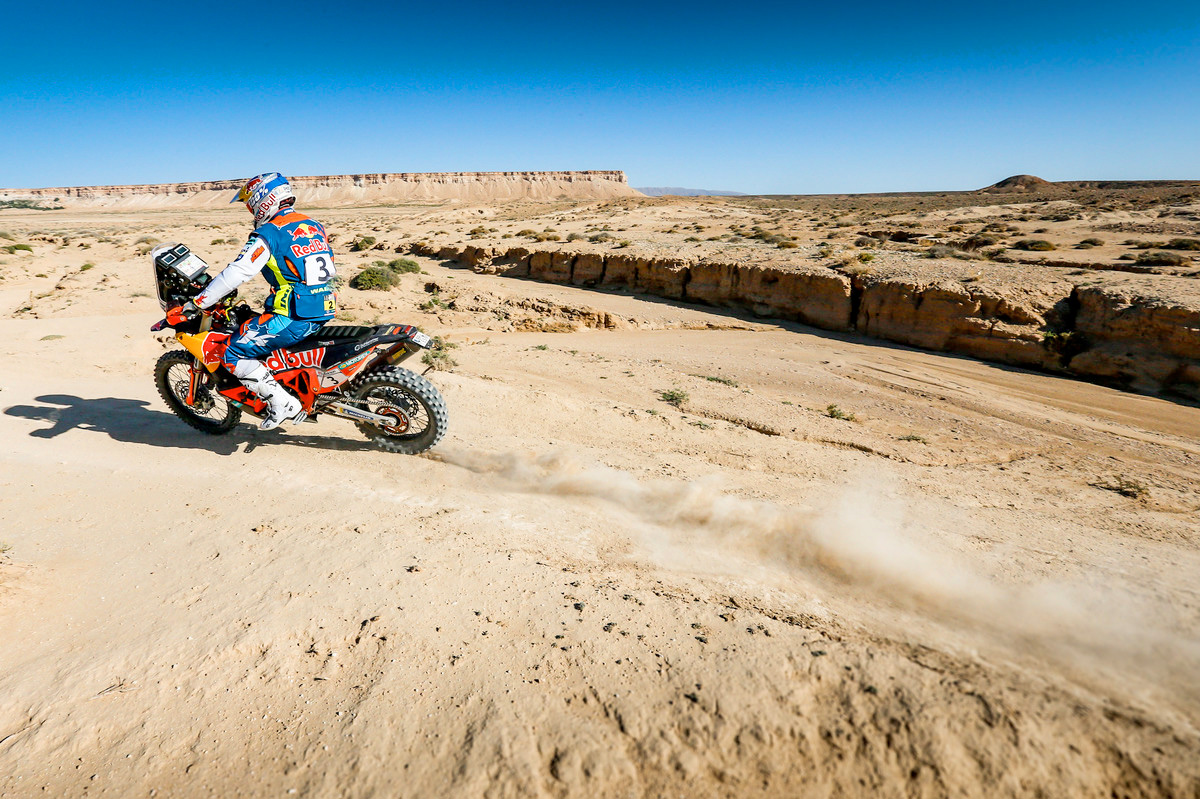 Matthias Walkner finished the Rally du Maroc in second place overall with third on the final stage. Photo: Rally Zone
Monster Energy Honda Team‰Ûªs American rider Ricky Brabec, triumphed on the final day, takes third place overall for the second year running aboard his Honda CRF450 RALLY, in what proved to be as a gruelling rally.

"The final stage of the rally was a good one," Brabec said. "It was a great way to end the rally and get the final race of the year under control before the Dakar in a good and positive way. I‰Ûªm very happy and looking forward to the Dakar. It was more or less my type of riding with a lot of rocks and trial areas which was really fun. Then we got up into the mountains where the tracks were a lot more visible and fast and sliding. It‰Ûªs always good to drift the bike around. It feels good to be going home. We‰Ûªve been in Africa for way too long. I‰Ûªm looking forward to a couple of weeks before the Dakar to get some nice recharge time." 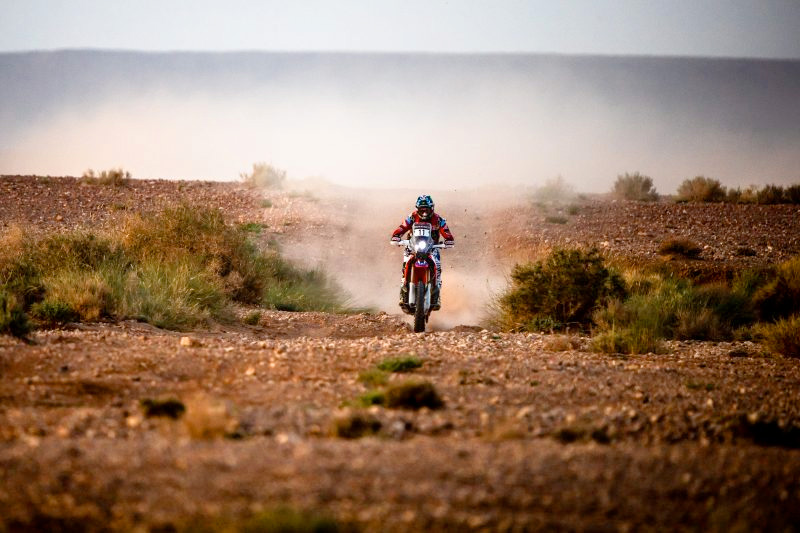 Monster Energy Honda Team‰Ûªs American rider Ricky Brabec, triumphed on the final day, takes third place overall. Photo: Rally Zone
Wrapping up the Rally du Maroc in second place overall with third on the final stage Matthias Walkner, although disappointed not to have taken the win, was pleased with his riding.

‰ÛÏIt was a tough day today ‰ÛÒ very fast, rough and the sort of stage that you could easily make a big mistake," Walkner said. I had a comfortable gap to the rider in third so I was able to take things a little steadier and aim for a safe finish. "Overall, I am happy with my performance here in Morocco and thrilled to take third in the championship.‰Û 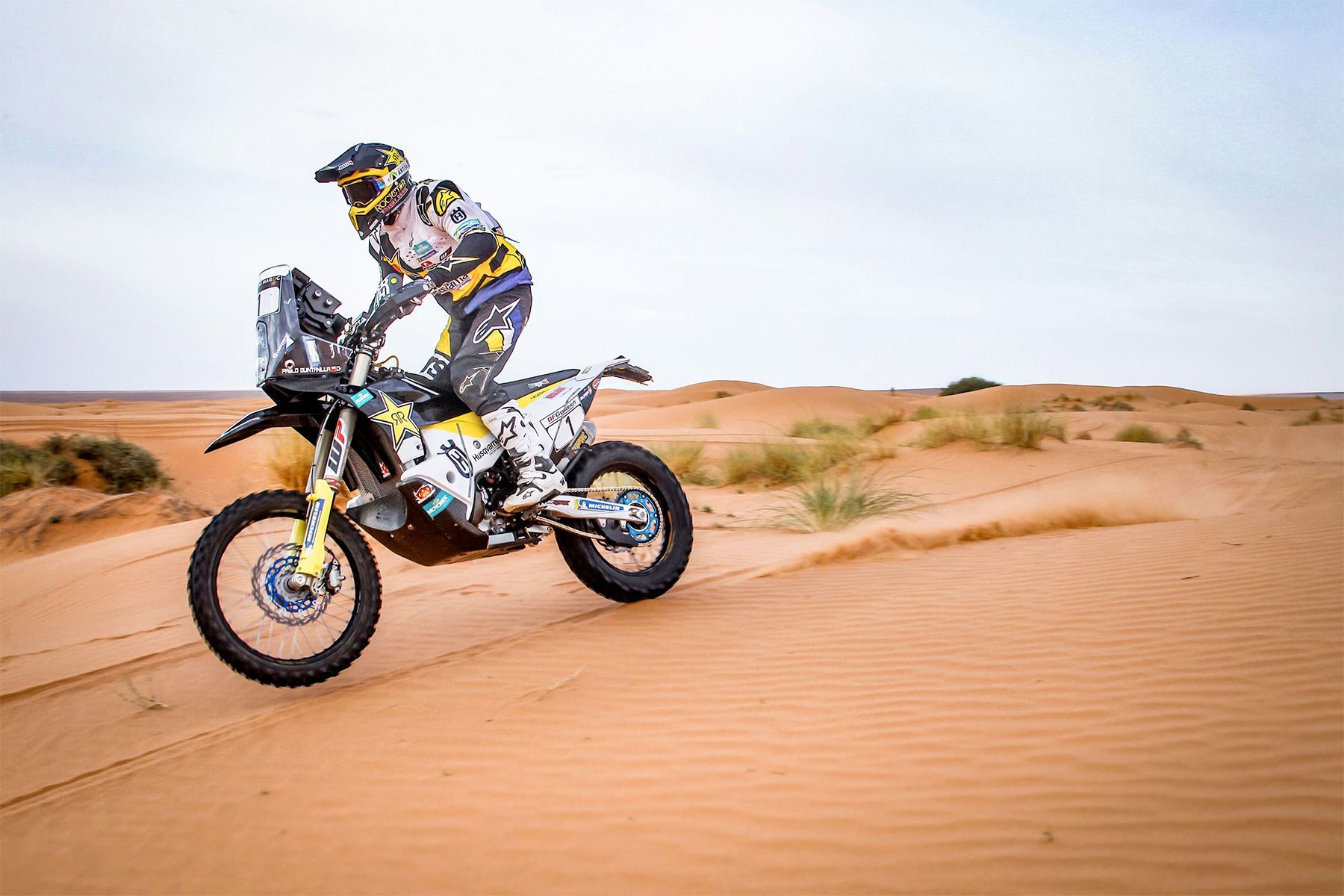 "It‰Ûªs been a long week of racing here in Morocco and I am happy with fourth in the overall results. I gave my best this season to defend my World Championship and I am satisfied to finish the season in the runner-up spot," Quintanilla said.

"I was on the podium in every race we took part in and ended the season with fourth here at the Morocco Rally. My race pace was good throughout the year and I was also very consistent in my results. I want to say a big thank you to all the members of the Rockstar Energy Husqvarna team, who have been giving their best in each event. This season I‰Ûªve worked a lot with my team and I‰Ûªm feeling strong going into the upcoming Dakar.‰Û 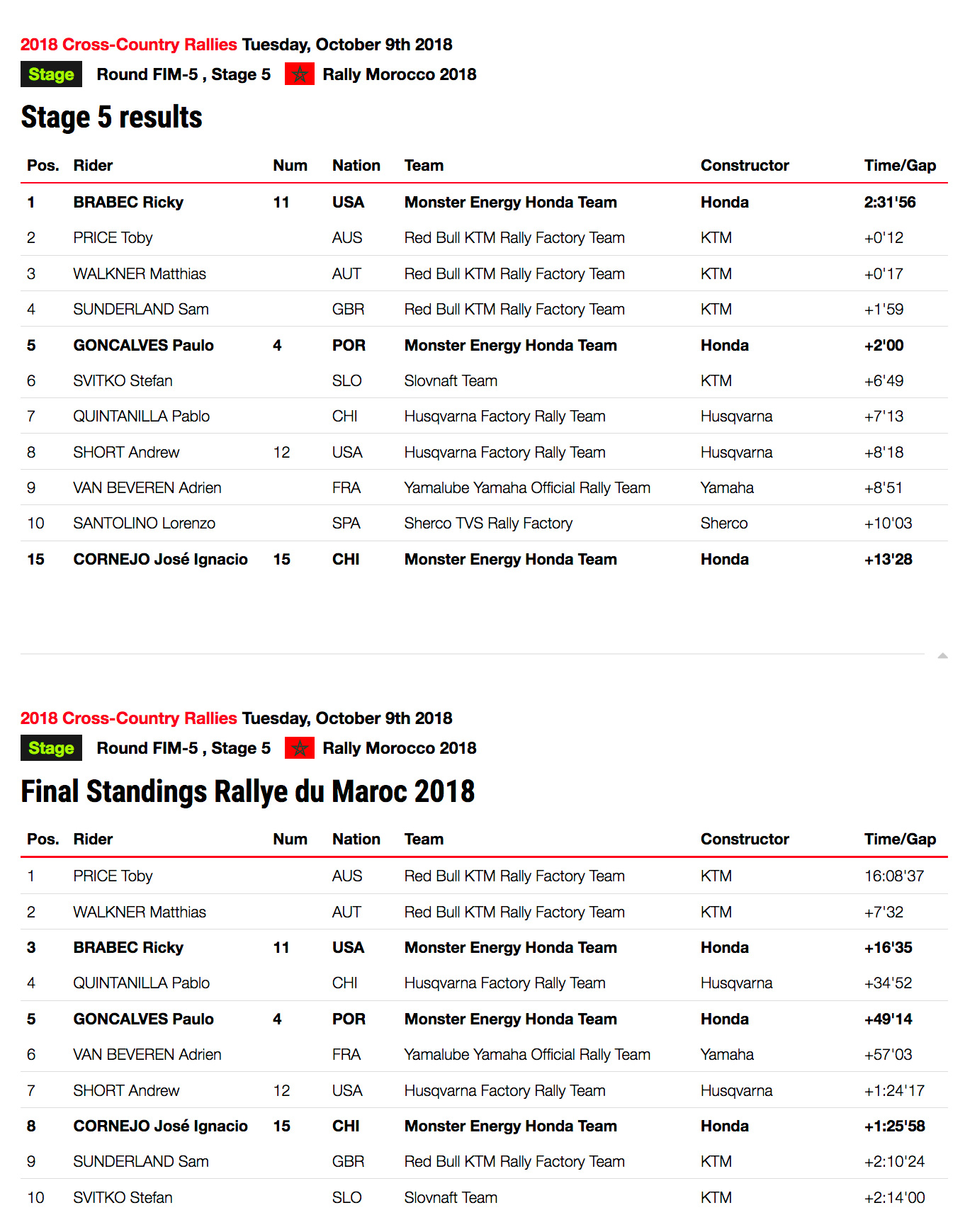