Australian Toby Price has fought back from yesterday‰Ûªs disappointing result to win stage 11 of the 2018 Dakar Rally just over a minute ahead of Honda's Kevin Benavides and team-mate Antoine Meo, interestingly all three fell victim to navigation errors on the previous stage.

Matthias Walkner placed fifth to retain his position at the top of the provisional overall standings. On a down note Joan Barreda abandoned whilst still holding second position. After having suffered several falls in some of the earlier stages of the rally and punishing his body severely, the exhausted Spaniard made the decision to completely withdraw. Barreda goes home with three stage victories this time and a total of twenty-two in all his Dakar participations. 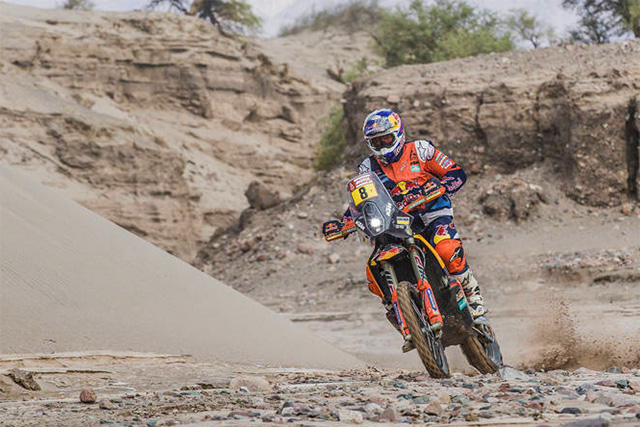 Aussie Toby Price took his first stage win for the 2018 Dakar. Credit: Marcelo Maragni/Red Bull Content Pool
Today's 11th stage was the first leg of the second marathon stage at this year‰Ûªs Dakar Rally. The Super FiambalÌÁ as it has come to be known was a 280km special through the Argentinian dunes with scorching temperatures reaching over 40 degrees. Similar to yesterday‰Ûªs stage, navigation was massively important as was the ability to conserve machinery as no mechanical help could be provided at the bivouac.

Toby Price was one of those riders who lost their way on yesterday‰Ûªs stage 10. Riding hard to make up time on today‰Ûªs stage, the Red Bull KTM Racing rider led the special from start to finish. This dominant performance moves the 2016 Champion up to third in the provisional standings, albeit close to 40-minutes down on the leader, team-mate Matthias Walkner.

"Yesterday was... I've never felt so bad in my life," Price reflected at the end of today's stage, "Today we just needed to try and see if we could claw back a little bit of time, and I think we've done that a little bit, but it's gonna be tough from back where we are. It's good to get a stage win. In the first week I was quite conservative, but now I attached some more, it's good to get a stage win because I hadn't done that this year so far. To be still in the race going towards the finish line is a pretty big achievement for me. My goal is just trying to stay on two wheels, not making a day like yesterday and seeing what that gives us at the finish line." 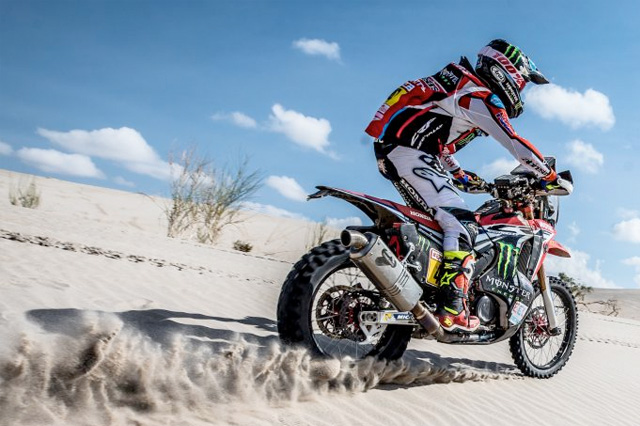 Monster Energy Honda Team's Kevin Benavides had a better day on today's stage coming hom second after losing loads of time yesterday. Photo: Honda
Monster Energy Honda Team's Kevin Benavides, in spite of starting out behind the cars and trucks, was in gung-ho attack mode in an attempt to claw back some of the deficit from the overall leader in the general standings. By the end of the day, the rider from Salta had crossed the line in second place, eating some nine minute into the lead of Walkner, leaving the overall distance between the two in the provisional at 32 minutes.

"We changed the chip after yesterday and we went out to push hard," Benavides explained. "I started out from a long way behind and I found a lot of trucks that had broken up all the track. It was a good result and we have reduced some time from the overall leader. We will continue pushing hard until the end." 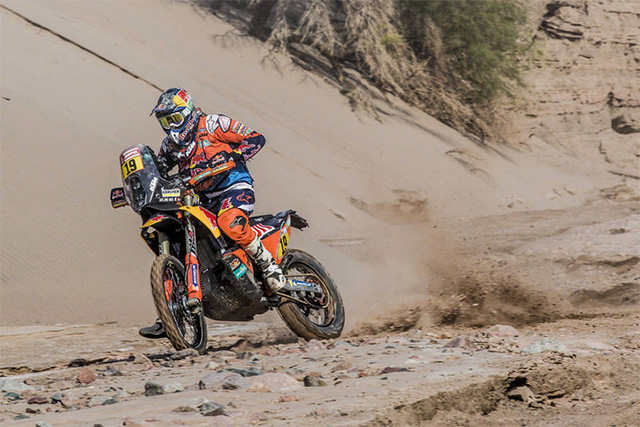 Antoine Meo was also another who got lost yesterday but rebounded today to finish third. Credit: Marcelo Maragni/Red Bull Content Pool
Like Price, Antoine Meo was suffering from a late start position due to his result from stage 10. The Frenchman rode superbly all day battling for the runner-up spot right until the flag. A small mistake cost Meo a few minutes but the former Enduro World Champion was still able to claim third place and also improve his position in the provisional standings to fifth.

A fine performance from Ricky Brabec, who finished fourth of the day and climbs to sixth place in the table.

"I am much happier than when I finished yesterday, which had been a nightmare to try to find that cursed waypoint," Brabec said. "I feel fine; the bike is running really well too. We will continue fighting to finish this Dakar as best we can. I hope Joan gets well and improves soon." 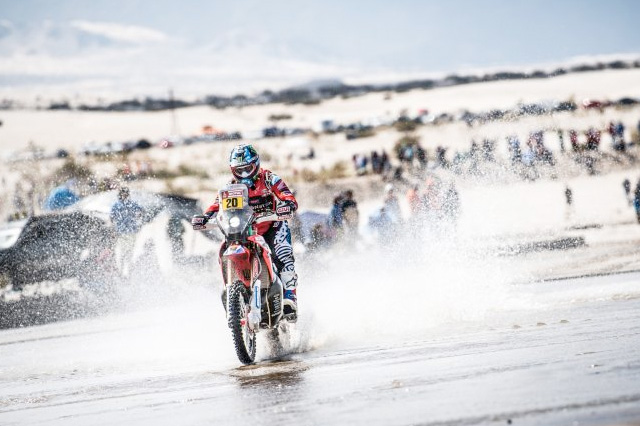 A fine performance from American Ricky Brabec, who finished fourth of the day and climbs to sixth place in the table
Overall leader Matthias Walkner opened the road for the bikes and with stage 11 being a mixed start, the Austrian had to contend with some of the leading cars on the tracks, too. Riding consistently and again concentrating on his navigation, Walkner rode to a strong fifth place ‰ÛÒ 11 minutes down on his team-mate and winner of the stage, Toby Price. Despite losing a little time today to his rivals, the former Cross-Country Rallies World Champion still holds a comfortable advantage at the top of the standings, 32-minutes ahead of second-placed Kevin Benavides.

"Things went pretty well for me today," Walkner said. "I was a little nervous because I didn‰Ûªt want to go wrong anywhere and lose all of the time that I gained yesterday. The stage was good, but my pace could have been a little better. I didn‰Ûªt really want to end up making a mistake by pushing too hard though. I got stuck behind one of the cars later on in the stage and didn‰Ûªt want to risk overtaking so that cost me a few seconds. Overall, I am feeling really good, my body is getting used to all the strain now. There are just three days to go, so I‰Ûªll keep focused and carry on.‰Û
Continuing to make progress in this year's Dakar Rally, Yamalube Yamaha Official Rally Team's Rodney Faggotter wrapped up the opening part of the event's second and final marathon stage in 16th position. With all eyes focused on reaching the big finish of the rally in CÌ_rdoba on Saturday, the experienced Aussie rally racer has moved up in the event's provisional overall standings to 18th.

"Following Adrien's crash yesterday, we've all stood behind Rodney in his quest to bring his bike to the finish of this extremely challenging event. Alexandre Kowalski - Yamalube Yamaha Official Rally Team Director- said." Rod keeps impressing every single day. He's been one of the most consistent racers in this year's rally and he's gradually moving higher up in the overall rankings. We're really satisfied with his hard work and dedication and we will keep supporting him 100% until he crosses the finish line in CÌ_rdoba." 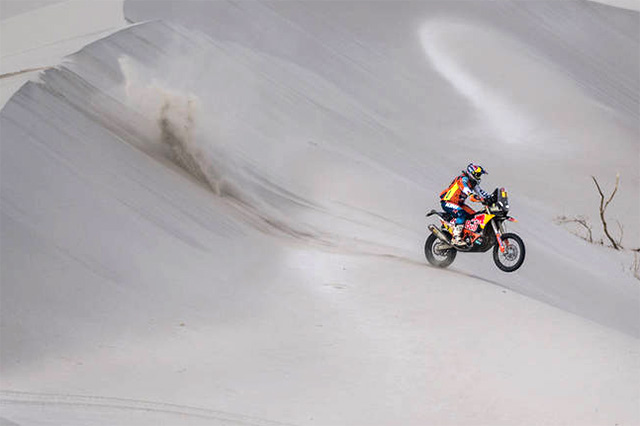 Matthias Walkner finished the stage in 5th but still has a commanding lead of 39 minutes.
Hero Motorsports Oriol Mena has quitley been making his way forward continued with his great form today finishing in 9th position. This result allowed him to break into the overall top 10 position at the 10th spot. 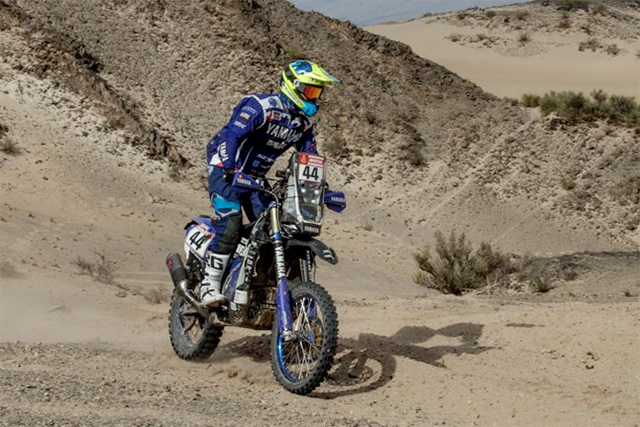 Rod Faggotter is the last man standing for Yamaha, he came home 16th on stage 11 and is 18th overall
Stage 12 of the 2018 Dakar Rally, the second leg of the final marathon stage, will again test both rider and machine. Following a night in the bivouac with no team-assistance riders will leave FiambalÌÁ and head for San Juan. Conserving both machine and energy will be extremely important on this 723km stage. A long 375km timed special will require good navigational and supreme physical endurance in the Argentinian heat. Winding its way through the dirt tracks and riverbeds of the San Juan region, the route could bring even more changes to the current running order. 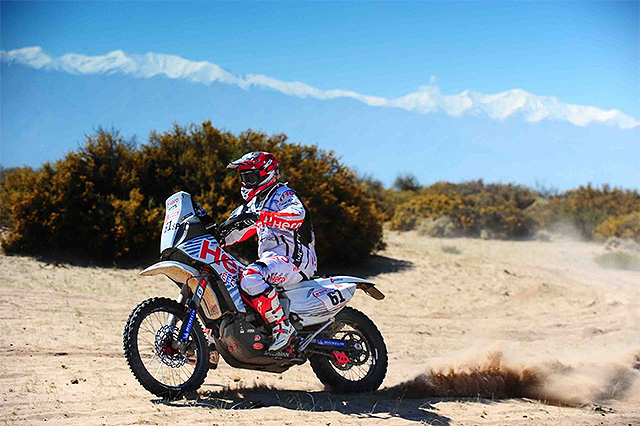 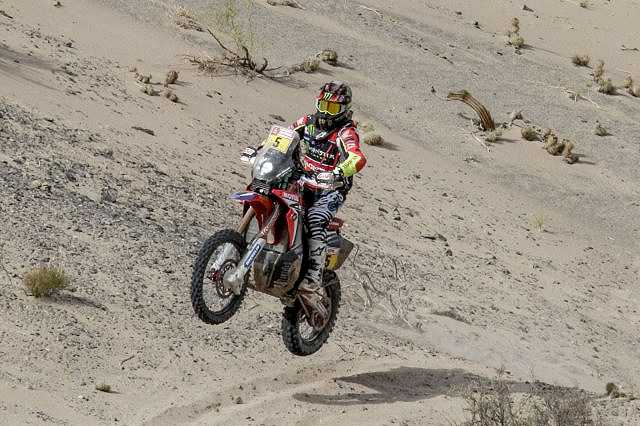