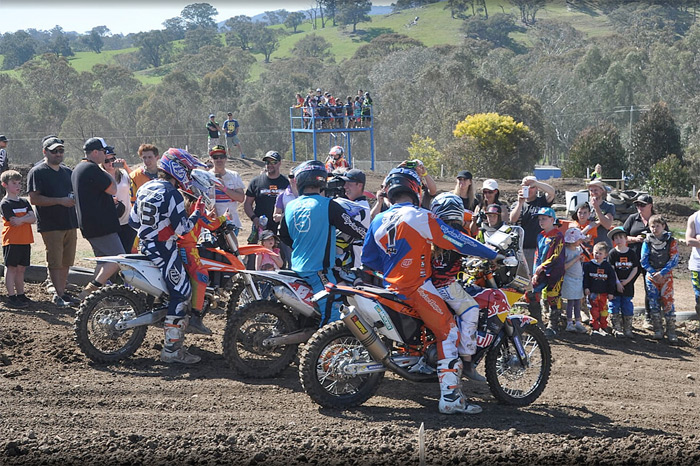 Price reacted instantly last week when he realised that the Rally of Peru - for which he was in South America at the time - had been cancelled due to bad weather and he immediately contacted KTM about hopping the first flight back to Australia.

Price typified KTM‰Ûªs enthusiastic and unwavering support of the Challenge‰Ûªs Ride4Kids concept, the brand having been involved as a sponsor since 2004.

‰ÛÏFor me every year this event just touches me because I'm very lucky to be where I'm at and doing what I'm doing, and unfortunately these kids don't really get the chance to have a childhood as we know it, going out and playing with kids in the playground and stuff." Price commented.

"They are always at the hospital or in treatment and going through some pretty tough times. To see them get away from that stuff for a day is something that we love doing and hopefully it can bring them some good memories.

"This is my third one and it was the biggest one we've had. There was 250 riders who came along to participate and raise money for the children so some of them may not have got as much riding time as they‰Ûªd possibly wanted to, but at the end of the day we are there to try and bring a smile to the kids‰Ûª faces.

"We had Challenge kids come out; one previous kid, Nathan, and two younger girls who were new faces. I had a 450 SX-F, and also a Rally bike with me which was on display all morning, and then I thought I‰Ûªd take a couple of kids on it. We did a few little laps so people could see what the bike was like and what it sounds like with the underpipe and the big Akrapovic silencer on it.

"She‰Ûªs a big beast of a thing, and everyone was pretty intrigued to see all the Rally stuff and find out how much you‰Ûªve actually got to do while trying to ride these bikes. A few people thought I needed a uni degree to ride it - if that's the case I‰Ûªm in a fair bit of trouble!

"I was lucky to get there this year because a few months back I was committed to doing a rally in Peru, but some bad weather went through and it got cancelled. I contacted KTM to try and change my flights so I could attend this event, and they were more than happy to help me. It's something I never want to miss if it is possible."

Challenge is a not-for-profit organisation that delivers support to children and families living with cancer, by providing a range of practical services and opportunities.

Now the nation's biggest dirt bike charity event, the KTM Ride4Kids has raised over $750,000 across 14 years for children and families living with cancer.

This year's event attracted over 250 enthusiastic dirt bike riders to what was the event's most successful running yet.

‰ÛÏIt was a ripper, clearly our best Ride4kids we've ever had. Having the great man Toby there made it for us ‰ÛÒ he‰Ûªs definitely a huge drawcard." Craig Gathercole - Event organiser said.

"He's been with us the last three years but once the Red Bull deal came along we sort of thought it was off, but when Peru fell over, he made contact and said ‰Û÷is it all right if I still come?‰Ûª As if we‰Ûªd say no!

"He‰Ûªs a great bloke, and as an ambassador for the sport, for KTM and for kids, he‰Ûªs definitely one of a kind.

"There were 270-odd riders this year, and probably around 700 in total for the event. It was a great carnival atmosphere and just a good, fun outing for kids and families and everyone involved.

"This year we had a lunchtime interview between Brendan Bell from MX TV and Toby Price, auctioned off framed Ken Roczen and Ryan Dungey jerseys and announced the top 10 highest fundraisers, and gave away the two KTMs ‰ÛÒ a KTM 125 SX and KTM 85 SX. It was a pretty jam-packed day, but a great atmosphere.

"We had three Challenge kids in treatment come out, and Toby, Wayde Carter and Mason Semmens took the three of them around the track on their bikes for a couple of parade laps. It was pretty emotional because everyone lined the track and clapped and supported and those kids just felt like they had won the Grand Prix. It was pretty special!‰Û