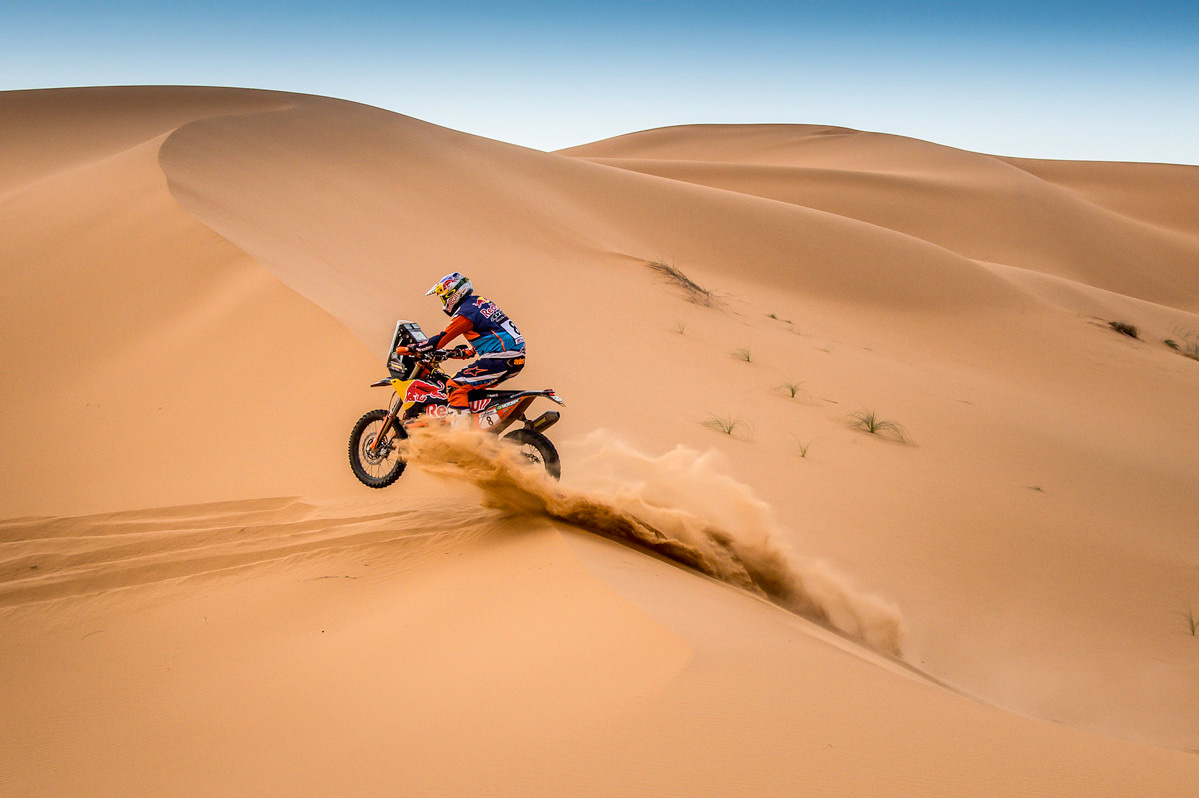 Australian Toby Price took a 7 minute win on stage 4 and shot back into the lead of the Rally Photo: Rally Zone
Toby Price has won the fourth stage of the 2018 Rally du Maroc with an impressive performance that saw him post a time seven minutes faster than second-placed Pablo Quintanilla and move back into the overall lead.

Sam Sunderland was third on the stage having opened the route from start-to-finish. Honda's Ricky Brabec was fourth while Matthias Walkner completed the stage in fifth..

Stage Four of the rally completed the tough marathon stages, where riders camped overnight in a desert bivouac with no outside assistance from team mechanics. With the two stages totalling close to 600 kilometres, conservation of bikes and tyres was imperative for riders looking to successfully finish the two days and secure a strong result.

Over the course of the marathon stage riders were presented with a mixture of terrain including the fast, rocky tracks often seen during the rally so far and the soft sand dunes of the Sahara Desert. With his bike performing perfectly, Toby Price pushed hard on the rough, Moroccan ground. Setting off sixth, the Australian was able to catch and pass every rider ahead of him except for teammate Sunderland.

‰ÛÏThe marathon stage went very well. It has been quite tricky ‰ÛÒ yesterday‰Ûªs stage was harder on our tyres than expected, so we had to ride intelligently today," Price said.

"I made a small mistake yesterday but was lucky enough to find my way quickly again, that gave me a perfect start position for today. I navigated through the stage really well and made up some good time. The bike was great and handled everything really well, the balance in all of the riding conditions is perfect ‰ÛÒ thanks to the WP Suspension guys for that. One more day to go now, so we‰Ûªll see where we end up and hopefully claim a good result for the rally.‰Û 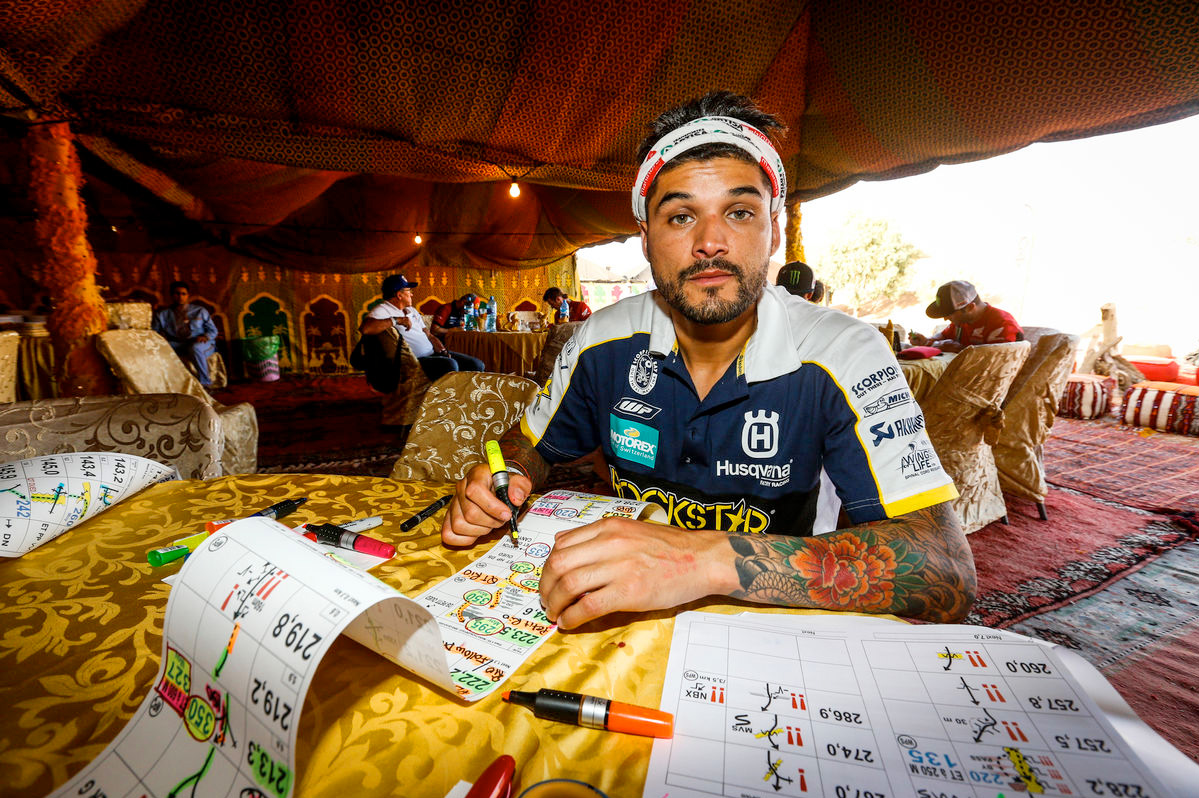 Defending Champion Pablo Quintanilla was solid in second. Photo: Rally Zone
Despite feeling the effects of a cold he picked up during the rally, Pablo Quintanilla kept his head down and went on to put in the second best time for the day.

‰ÛÏThis Marathon stage was tough for me. I have been struggling with a cold these last few days and yesterday I felt the effects on my body," Quintanilla explained.

"I did my best despite this set-back and I am happy I finished this Marathons stage without any problems. Today I pushed more and managed to put in a great time in the special test. Some parts of the special were tricky and confusing but I tried to retain a good pace and make up for the time lost on stage one. I‰Ûªm now fourth in the overall and we have one more stage to go. I‰Ûªll try to get some rest this evening and the goal is to get back stronger tomorrow and continue pushing until the last kilometre.‰Û 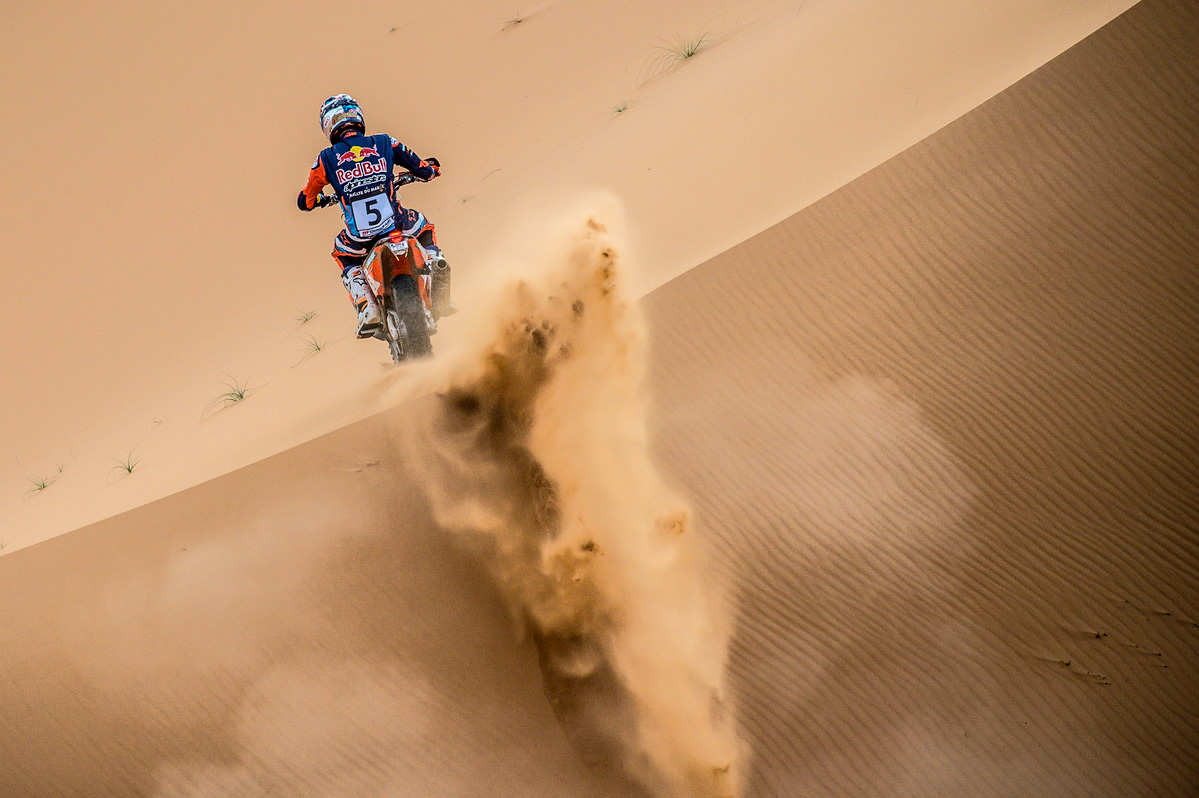 Brit Sam Sunderland had another good day rounding out the top three Photo: Rally Zone
Following his Stage Three win, Sam Sunderland led the riders away from the bivouac this morning. The 2017 Dakar Rally Champion opened the stage from start-to-finish, never headed by the riders behind. Sunderland‰Ûªs finishing time placed him third, less than one-minute behind Quintanilla.

‰ÛÏIt‰Ûªs nice to finish the marathon stage. I was fastest yesterday and had a really good feeling on the bike," Sunderland said. "I did make a couple of mistakes but kept to a good rhythm and managed to get the stage win. Today I set off first, which is always a challenge, especially in the dunes as it‰Ûªs easy for the guys behind to follow, but I still managed to reach the finish first. That‰Ûªs encouraging, especially as things like the tyres were worn out after such a long distance. The bike feels really good and I‰Ûªm happy with my riding, it‰Ûªs just a shame I lost so much time on Saturday.‰Û 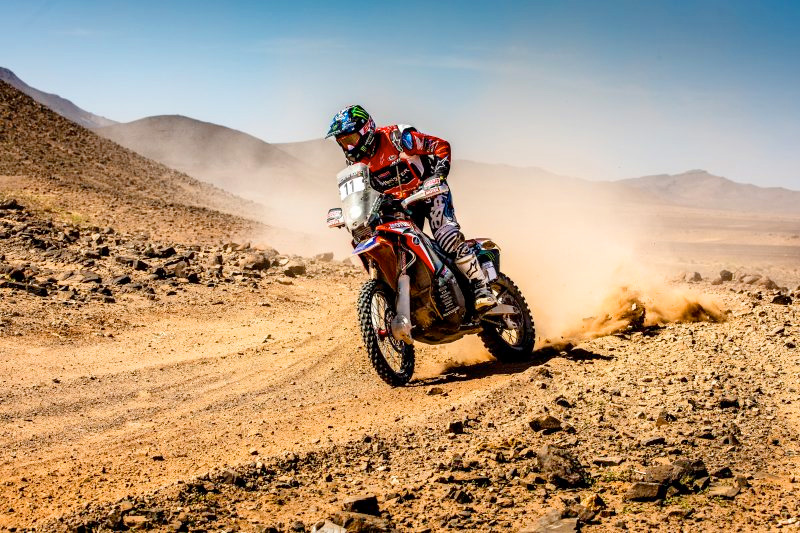 "Today was stage four ‰ÛÒ the final stretch of the marathon stage and the start of the last special of the Morocco Rally. The day was good," Brabec said. "The marathon went well with nice beds, good showers, great food and all the rider‰Ûªs bikes were okay. The stage was 300 km with very fast pistes but the tyres were smoked. We really had to take care of the tyres and bikes to make it to the finish. I‰Ûªm looking forward to the final kilometres to get back to Fez" 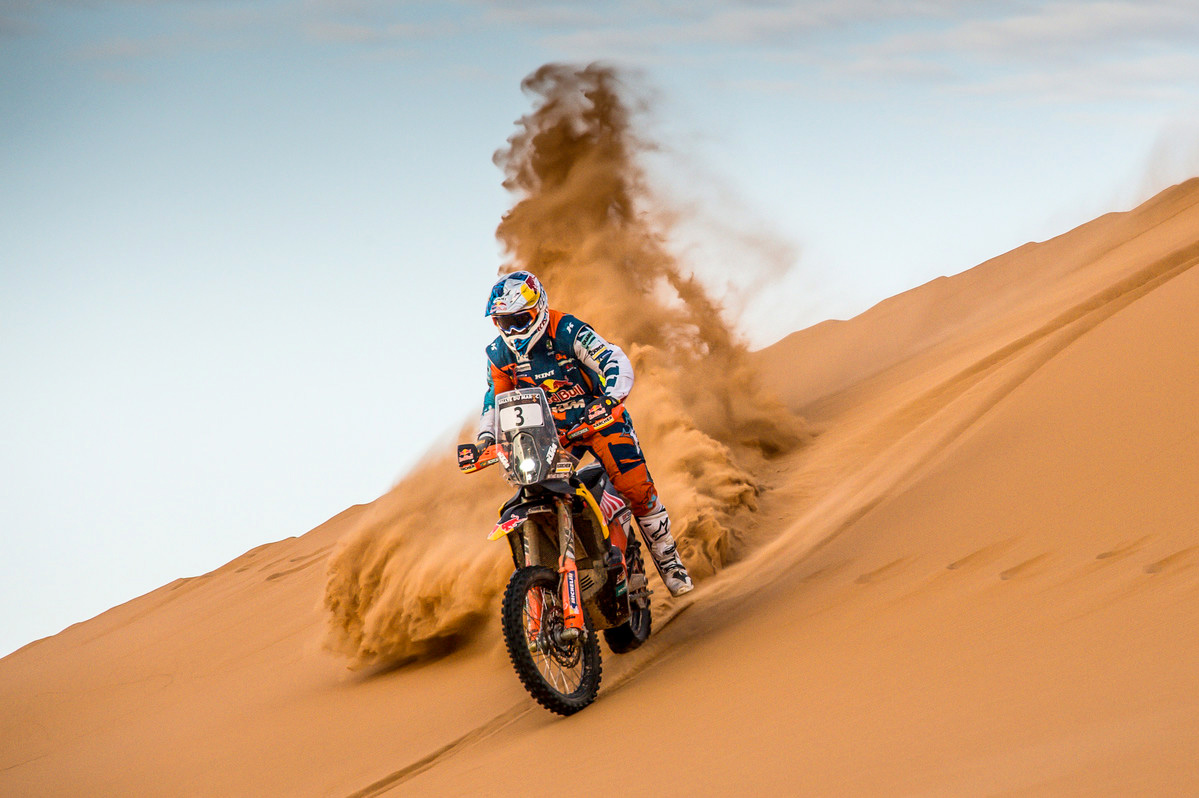 ‰ÛÏYesterday went really good ‰ÛÒ I opened the whole piste and still finished second," Walkner said. "I feel it cost me a lot of energy though, especially mentally, I was feeling especially tired today and wasn‰Ûªt 100%. Today everything was good up to the refuelling point at 250 kilometres, after that I made a silly mistake where I went off-track and lost seven or eight minutes. It was my own fault but it‰Ûªs frustrating as I know my speed is good. In the end I tried my best and mistakes can happen. I‰Ûªll try again tomorrow and aim to finish on the podium.‰Û 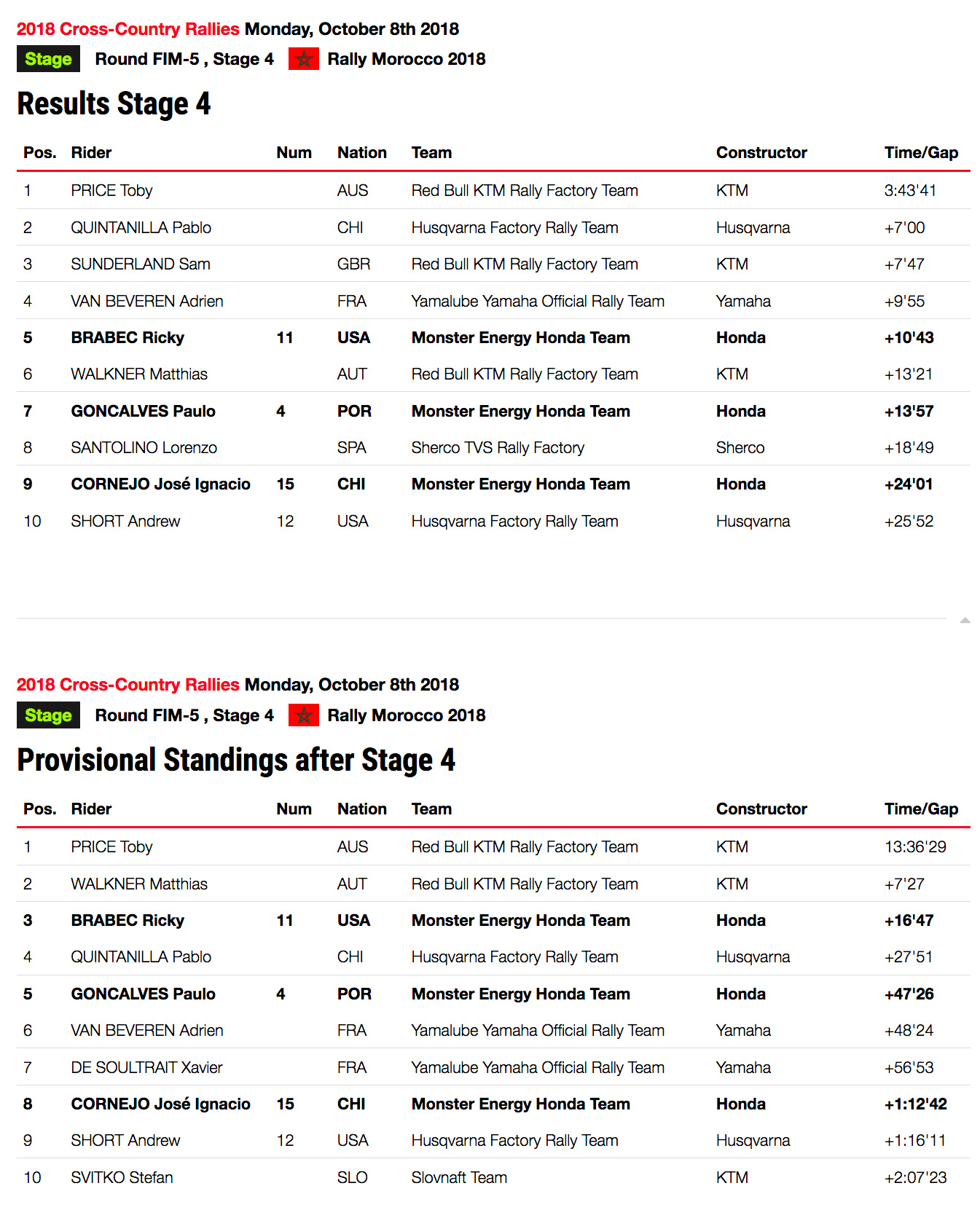