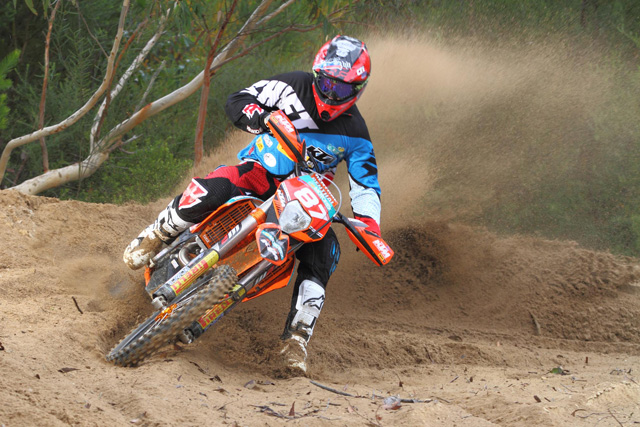 Motorex KTM Off Road Racing teammates Toby Price and Chris Hollis will resume their inner-team rivalry when the third and fourth rounds of the Australian Off-Road Championship take place at Wonthaggi in Victoria this weekend, 31 March-1 April.

Price struck the first blow at the season opener earlier this month after an enthralling dual with defending AORC champion and team newcomer Hollis, but believes that consistency across all 10 rounds will play a vital role in season 2012.

"The series started off a lot better than last year and I'm feeling really good," Price commented. "Saturday's result was really good, it was good to get a win under my belt straight up."

"Getting a second on Sunday behind Chris, I put down some good times with a few little mistakes along the way, but that's all part of racing. I'm looking forward to the next round to come around and getting back out there to try be consistent and stay on that podium." Price concluded

While Price will again campaign the big-bore 500 EXC in the E3 class, which he leads along with the outright points chase, team mate Hollis will be back aboard his 350 EXC-F where he will look to make up valuable points in the E2 class after suffering a chain derailment at round one before his round two win.

Since the opening rounds, both Price and Hollis have been out at Finke, undergoing their initial preparation for Australia's great desert race that will be contested in June giving the riders a bit of a change in pace between rounds.

E1 Class contender Ben Burrel made an impressive debut for the team at the opening round on the 250 EXC-F, finishing with 3-2 results and positioning himself as a title threat for the season ahead. He'll be aiming for a debut win come Saturday and Sunday.