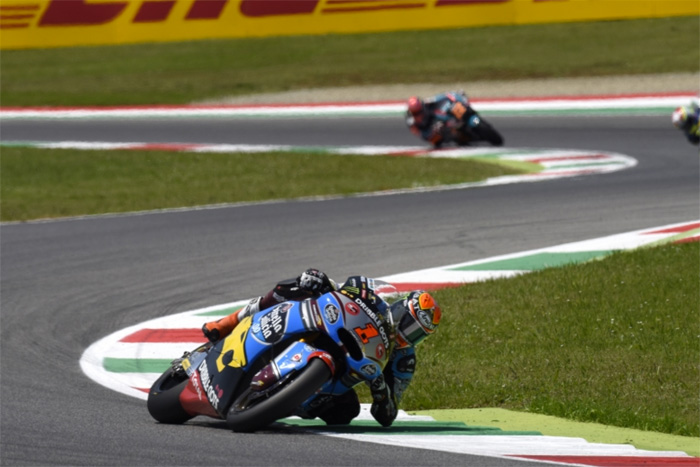 The Honda-powered Moto2 class brought a welcome return to the top step for defending champion Tito Rabat (Estrella Galicia 0,0 Marc VDS Kalex), after a mixed start to the season for the rider who dominated last year.

Points leader Johann Zarco (Ajo Motorsport Kalex) challenged long-time leader Rabat strongly in the final laps at the Italian GP overnight and was just three tenths of a second behind over the line. His third second place of the year extended his championship lead.

The Spaniard and Frenchman had outpaced a battle for third, where Dominique Aegerter (Technomag Racing Interwetten Kalex) beat pole starter Sam Lowes (Speed Up Racing Speed Up) by less than a second.

Le Mans winner Thomas Luthi (Derendinger Racing Interwetten Kalex) had seized the lead from Aegerter on the second of 21 laps, but slipped off unhurt before completing the third. Double 2015 race winner Jonas Folger (AGR Team Kalex) was another casualty, crashing on lap seven while lying third.

Rabat took the lead on lap seven, and Zarco pushed Aegerter to third before half distance.

‰ÛÏI am very happy to finally get a win this season, as it‰Ûªs taken some hard work from both me and the team to get to this point." Race winner Rabat said. "Every race we have improved and now we can win again, so big thanks to my crew, who have worked tirelessly to put us back on the top step of the podium.

"It was a tough race as I was having a few problems with the front in the last laps, but I knew I had enough left to hold off Zarco at the end.‰Û