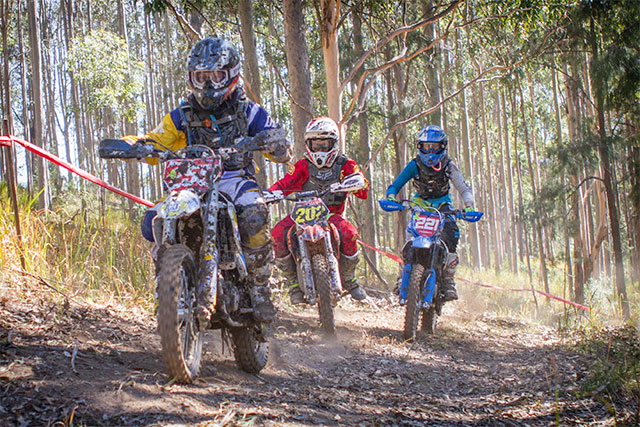 In an absolute hive of activity, Junior competitors will line up for Rounds 3&4 at Rawson in Victoria on 22-23 April, to compete in their respective class championships. Copious amounts of Junior riders have signed up for this year‰Ûªs Yamaha Australian Off-Road Championship (AORC) and are looking to impress!

In a natural progression, the Yamaha AORC Junior Championships allow young Enduro riders to rise though the ranks of age groups and bike engine capacity to make a seamless transition into senior racing on larger machines when they are ready to do so.

With so many contenders for the Junior classes its time to break down the major Junior players in the Championships at the start of the Off-Road season, and look to see who is set to rise in the rankings.

J2 2016 Champion, Ashden Gramlick is moving up to J4 class, a number of riders will be looking to claim the newly available J2 throne. Hot class contenders to watch are; Jasper Franklin, Dusten O‰ÛªNeil, and brothers, Will and Gus Riordan who will all be in with a shot at claiming the Championship.

Champion Corey Hammond took the tile last year (2016) and has since moved to the J4 class. J3 is set to heat up with a number of new faces moving up from J2 into J3. The J3 class is extremely competitive with new faces and winners coming left right and centre. Picking a title favourite at the start of a season is no easy task.

Matthew Pye, finished runner up in the J2 Class last year will be looking to add consistency to his riding after narrowly missing out on the J2 championship in 2016 despite his many wins. He could solidify himself in the J3 class this year for the honours.

Corey Hammond will attempt to continue his stamp of authority on the J4 Class after last year‰Ûªs J3 Championship victory. Runner up for the J3 class hot on his heels will be last year's Mitchell Brierley. Brierley will be looking to put things right after devastatingly losing out on the J2 Championship last year by only two points.

Junior confidence is at an all-time high in AORC paddocks, as some lucky young competitors have participated in the Yamaha AORC Junior Coaching Days in the off season. The aim of the coaching days is to 'buddy up' a junior rider with a seasoned Off-Road champion. Here, they have been taught invaluable Off-Road skills by world class enduro riders in a state to state based developmental program.

The Juniors will be eager to show off what they can do and with their amazing talents, the future of the 2017 Yamaha AORC looks to be an abosolute feeding frenzy of two-wheeled excitiment! See the Juniors in action at Rawson VIC 22-23 of April!

Stay up to date with all the happenings of the 2017 Yamaha Australian Off-Road Championship by visiting the brand new AORC website at www.aorc.org.au

Main Photo: Junior riders at AORC Round 9 at Monkerai 2016