Tim Gajser to be HRC’s lone representative at French MXGP 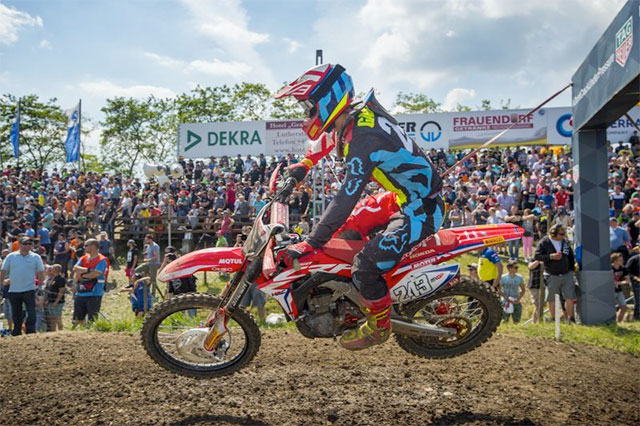 Fresh of the back of the German MXGP, the FIM world championship heads straight to ErnÌ©e this weekend for the MXGP of France.

Tim Gajser will be the teams only rider with Evgeny Bobryshev still sidelined after breaking his collar-bone last weekend.

Tim Gajser has some fond memories of ErnÌ©e as this is where he debuted racing the CRF450R, in the 2015 MX of Nations. Following his crash in Germany last weekend, he has been resting up at home this week. The Slovenian will be hoping to come back stronger from his run of bad luck he has experienced over the last two GP‰Ûªs.

"I am resting up at home this week in order to get ready for France so I hope I am not so sore as I want to come back stronger and fight for the championship again," Gajser said, "We had the nations over there in 2015 and from what I remember it is a very traditional french track with stones and really tight corners. We get alot of spectators there and It is always nice to go to France".

ErnÌ©e is a purpose built hard pack motocross track in the small village of ErnÌ©e in Northern France. It is famous for its steep drop offs and hill climbs. It is also extremely popular with spectators as they can view the whole track from the opposing hill. It was used in the 2005 and 2015 Motocross of Nations.

The weather is expected to be extremely warm over the weekend, with highs reaching nearly 30 degrees. There is a small chance of rain on the Sunday which could potentially make the race a little more challenging.