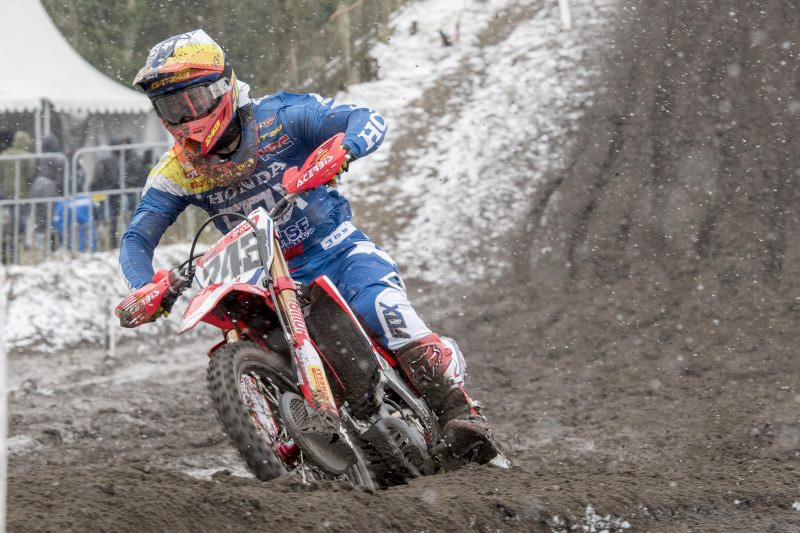 Tim Gajser battling the mud, snow and cold of Valkenswaard in his return to MXGP racing. Photo: HRC
Former MXGP World Champion Tim Gajser enjoyed a sensational return to MXGP action after missing the opening round of the season, as the star of Team HRC finished today‰Ûªs qualifying race at Valkenswaard in third place after an excellent ride in the treacherous conditions encountered at the Dutch venue.

Gajser got a great launch as the gates dropped and immediately got himself into third place. After losing one position during the opening lap, the 2016 MXGP World Champion maintained a strong pace while running in fourth place and looking very comfortable and confident aboard his Honda CRF450RW machine.

The Slovenian rider was then promoted to third after leader Jeffery Herlings crashed out of the lead, and from there on Gajser brilliantly defended his position from the resurgent defending champion Antonio Cairoli.

"I felt good today. I‰Ûªm just thankful and happy to be back racing after such a big crash; it was kind of a little miracle to return so soon!" the 21-year-old said.

"The qualifying race went well: I got a great start and although in the early stages I wasn‰Ûªt aggressive enough I managed to get into a nice rhythm and in a couple of occasions I got closer to Gautier [Paulin]. It was difficult to overtake, however, because there was one main line and when I tried to choose a different one I almost got stuck. I‰Ûªm happy with the result and with the bike, so I would like to thank the team for the great job done and everyone around me for the invaluable support."

HRC General Manager - MXGP - Marcus Pereira de Freitas, added, "Tim had a great start to the race and held his ground really well, especially when Cairoli got closer. He rode well and took no risks, and that‰Ûªs very important because it was his first race after injuring his jaw last month. It has been a very positive performance from him, he felt good with the bike and confident so we look forward to tomorrow ‰ÛÒ no pressure, as the goal is to take some points back home."