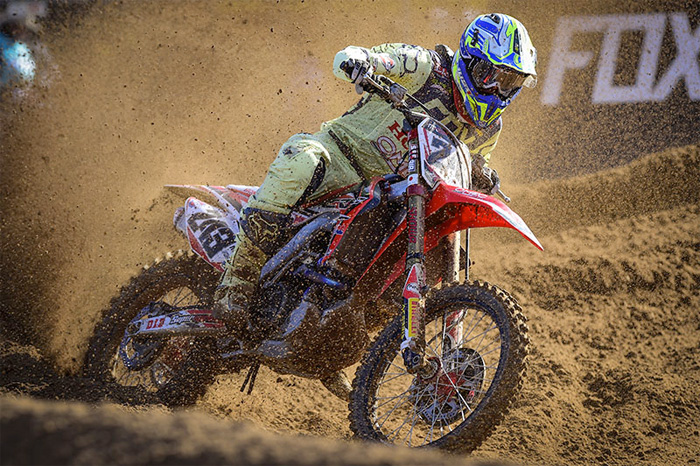 All pandemonium broke loose overnight at the sixth round of the FIM Motocross World Championship as riders were kicked and bucked all over the show on the rough and technical circuit of Zelta Zirgs, in Kegums, Latvia.

A packed schedule, with three European classes also out on track this weekend, made for brutal conditions where being smooth and consistent was the ultimate challenge.

Honda Gariboldi‰Ûªs Tim Gajser, the same guy that was such an animal on the bike in MX2, has turned into the smoothest and smartest rider in MXGP‰Û_ most of the time. Gajser embraced that style on his way to the win in race one, but in race two, the beast was back as the nineteen year-old recovered from an enormous crash to finish fourth which was still enough for the overall, his fourth of the season.

Honda Gariboldi‰Ûªs Tim Gajser had an action packed day in the office. The kid known to his fans as Tiga won the first race, which catapulted him to the top of the championship standings since Romain Febvre only came home in fifth. Heading into race two Gajser had a 6 point lead in the championship, but twisting the kaleidoscope, he had a huge high-side through the waves.

Lucky to be unscathed, he got back to his bike, which was still running at the time and in the heat of the moment, dropped the clutch and stalled it. When it fired back up, he was outside the top twenty but astonishingly he got all the way back to fourth for his fourth grand prix overall.

Gajser is the only rider to have finished on the box at every round this season. He now trails Febvre in the championship by 1 point and still tops all the stats with 3 qualifying race wins, 108 laps led, 6 race wins, 4 grand prix victories and 6 podium appearances.

Red Bull KTM Factory Racing‰Ûªs Antonio Cairoli is in second place on the ‰Û÷laps led‰Ûª chart with 39. The Italian was on the brink of his first victory since the MXGP of Great Britain in Matterley Basin, which was almost one year ago, but ended up being nudged down to second place on the final lap when Tim Gajser added two more points to his tally with his pass on Max Nagl.

Right after the race, TC222 said ‰ÛÏI‰Ûªm not happy about my performance because I‰Ûªm missing some speed after fifteen minutes, I know I am back and I want to win, I want to win soon.‰Û

The MX2 field rounds the first turn in Latvia
Red Bull KTM Factory Racing‰Ûªs Jeffrey Herlings is out of this world at the moment.

While a lot of riders struggled with the roughness of the circuit, Herlings just got stronger and faster. It was awe-inspiring to watch The Bullet attack the track with such finesse. He won both races by more than thirty seconds and lapped more than half of the field.

‰ÛÏI‰Ûªm back, I‰Ûªm feeling strong and I‰Ûªm just trying to get the best out of myself, it‰Ûªs six out of six wins this weekend and I hope there will be many more to come.‰Û