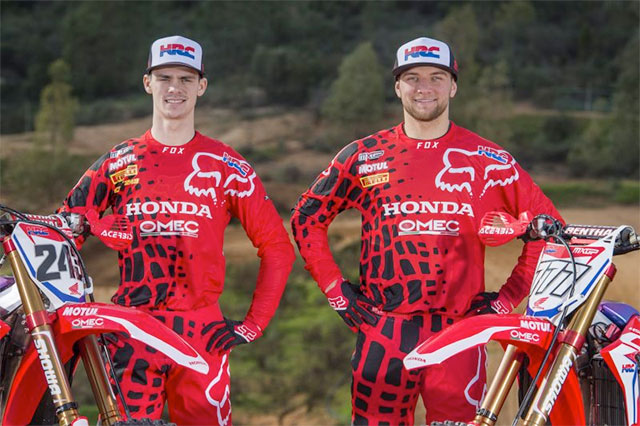 The much-anticipated 2017 MXGP season starts this weekend at Losail, Qatar, and Team HRC and defending champion Tim Gajser are ready to do battle.

Reigning World Champion Tim Gajser and team-mate Evgeny Bobryshev are preparing to start in similar fashion to last year‰Ûªs season-opener, where both riders took to the podium in Qatar and Gajser sensationally took his career-first double moto win at a Grand Prix. They will be lining up their CRF450RWs under the floodlights of Losail in the cool, dry desert air in the only night race of the year.

Both riders have been training and riding in Sardinia for the last month and have competed in the International D‰ÛªItalia Motocross in preparation for the season ahead.

Out to defend his title this year, Gajser has been training back at home in Slovenia until January when he joined Team HRC in Sardinia. Despite the obvious pressures being a world champion brings, Gajser‰Ûªs advantage is his mental strength in his own ability. His approach to 2017 remains the same which is to enjoy each race and to focus on staying fit through the season as he attempts to achieve a remarkable three-in-a-row

"It's always really exciting coming into the first race of the season," Gajser said. "The weather is looking good which will be nice conditions for racing. I feel like 3 months without racing has been a really long break so I am looking forward to getting back into the season.

"The track is something special as not only is this the only race we do under spotlights, the ground underneath is quite hard and the bumps are different to most other tracks we race on. It is always an eye opener coming into the the first free practise as then we will see how fast everyone is and where I belong.

"Obviously my goal is to be on the podium and last year I had the double win here. We have been working hard during the winter and we have set up an awesome bike through HRC. I am not putting any pressure on myself I am going to go out enjoy it and have fun like I did last year. Which I do not think is a bad goal for the first race.

Entering his 8th year with Honda, taking 3rd in the International D‰ÛªItalia Motocross championship and looking to improve on his 5th place finish in MXGP last year, Evgeny Bobryshev has attacked pre-season training differently. Spending more time on conditioning his body and less time on the bike, Bobryshev is confident this will see him through the long season ahead and help ensure he has the endurance to persevere in what will be an intense season.

"I feel comfortable heading into Qatar this weekend," Bobryshev said. "I am in good shape and I have improved my condition overall so I am in a much better place this year to where I was last year. This winter testing with HRC has also gone positively and we are heading in the right direction for the season.I have good memories of Qatar from last year, I really like the overall event at Qatar from the track to riding in the evening so I can't wait to get behind the gate."