Tight At The Top As Series Heads To VIR 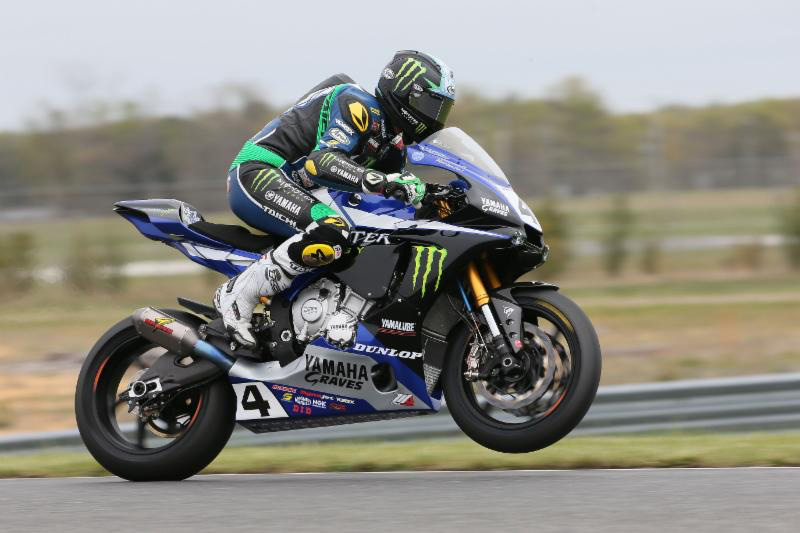 With one third of the season already in the books, the 2016 MotoAmerica Superbike Championship couldn't be any closer as the top four contenders are separated by just 13 points in what is shaping up to be a championship that will be fought to the bitter end.

And that championship reconvenes this weekend for the Yamaha Superbike Challenge of Virginia at VIRginia International Raceway, round four of the 2016 MotoAmerica AMA/FIM North American Road Racing Championship.

Four-time AMA Superbike Champion Josh Hayes comes to VIR with the lead in the championship, albeit by just four points over his Monster Energy/Graves Motorsports Yamaha teammate Cameron Beaubier. While Hayes has yet to win a race, his season has been the most consistent of the top men thus far. Hayes has been on the podium in four of the five races and - like the other three - has a non-finish. He also can't recall opening a season with six races and zero victories.

"It's been quite a few years since I've raced six times and not won a race," Hayes said. "I have been steady, which has put me into the points lead, but honestly what's more important to me personally is winning races, so I've got to figure out how to do that. If you win races, the championship comes into play anyway."

If Hayes is to get back to winning, VIR offers up a pretty good opportunity for him to do so. After all, he's won five Superbike races (and four other class wins) at the popular racetrack in Danville.

"I have a pretty good history in the last 10 or 11 years of being able to figure out how to win some races at that racetrack," Hayes said. "We stopped going there for a few years and I definitely missed it. In 2009, I doubled at the end of the season there and I doubled there in multiple classes in 2007 and 2008 and it was crucial to my championships. Last year I had a good run there in really hot conditions. It's a track that's always been a lot of fun for me and I enjoy being there and I'm looking forward to getting back there. I feel like it's one of my better chances to get some race wins and a good place for me to get back on the right track of winning some races."

Beaubier has two non-finishes but three straight wins coming into VIR. The defending MotoAmerica Superbike Champion comes to Virginia on a hot streak after having won the last three races (race two at Road Atlanta and a doubleheader sweep at New Jersey Motorsports Park). His two non-finishes put him on his back foot early, but thanks to the perfect 50 points he scored on a rainy day in New Jersey, he's put himself into championship contention again.

Like Hayes, Yoshimura Suzuki's Roger Hayden comes to VIR without a victory thus far in 2016. But, again like Hayes, his season has been one of consistency with four podiums in the six races thus far. The New Jersey round, however, is one that Hayden would like to forget as he came out of the Garden State with just seven points after finishing ninth in race one and crashing out of race two.

Fourth in the championship is held by Spaniard Toni Elias, the former Moto2 World Champion who started his 2016 campaign with three straight wins (both races at COTA and race one at Road Atlanta). His fast start earned him a contract to remain with Yoshimura Suzuki for the remainder of the season, but the ink had barely dried when his good fortune turned bad at NJMP. Elias failed to score a point in race one in New Jersey and followed that up with a 12th place finish in race two. Despite struggling in the two wet races in Jersey, he's only 13 points behind Hayes as he comes to VIR to learn what will be his fourth new racetrack in as many races.

With 13 points separating the top four in Superbike, the top three in the Bazzaz Superstock 1000 class are also closely knit with just 15 points between series leader Claudio Corti and third-placed Bobby Fong. Between them sits Josh Herrin.

Corti had his best weekend of the season in the rain of New Jersey, the Italian putting his HSBK Aprilia RSV4 RF on the Superbike podium in both races and leaving with a perfect points tally of 50 in the Bazzaz Superstock 1000 Championship. Corti leads Herrin and his Wheels In Motion/Meen Motorsports Yamaha by nine points and Latus Motors Racing Kawasaki's Fong by 15 points. Those three riders have won all six races thus far in 2016 (Corti 3; Fong 2; and Herrin 1).

The closest of the championships in 2016 is Supersport with Y.E.S./Graves Yamaha's Garrett Gerloff and his teammate JD Beach separated by just two points as the series arrives at VIR. And Frenchman Valetin Debise is just a further six points behind.

Gerloff started the season off with three straight wins before giving way to Beach in race one at New Jersey. In race two at NJMP, it all went wrong for Gerloff with the championship leader crashing out of the race (along with Beach and Cameron Petersen) and not making the restart after suffering a knee injury. The race was won by Petersen on the restart with Debise second and Beach third and that allowed the chasing pack to close the gap on Gerloff, who returns to action this weekend, in the title chase.

It's Beach who comes to VIR with the fondest memories. Last year, the Kentucky resident qualified on pole, finished second in race one and won race two. That win was the start of a win streak that reached six straight races and ended up with him taking the Supersport title.

With two wins in four races, Tuned Racing's Bryce Prince leads the Superstock 600 points tally coming into VIR. But HB Racing/Meen Motorsports' Dakota Mamola made in-roads into that points lead in New Jersey with his first-career MotoAmerica victory coming in race two on Sunday after Prince had won race one on Saturday. Now the pair are separated by just nine points with Andy DiBrino a further 20 points behind in third.

The KTM RC Cup racers will have their fifth and sixth races of the year at VIR with the series (and Superstock 600) getting started a round later than Superbike and Supersport. With two wins in the four races, AXcess Racing's Brandon Paasch holds the series points lead over his rival Anthony Mazziotto III, 90-78, with Double B Racing's Jody Barry holding down third in the standings after winning his first-career MotoAmerica race at NJMP in race two.

Josh Hayes qualified on pole position for the two Superbike races last year at VIR. The Monster Energy/Graves Motorsports Yamaha rider lapped at a best of 1:24.868 on the 2.25-mile North Course.

With his three straight wins (race two at Road Atlanta and a sweep of the doubleheader at New Jersey Motorsports Park), Cameron Beaubier has moved into a tie for 10th on the all-time AMA Superbike win list with 14 victories. He's now equal with former World Champions Eddie Lawson and Scott Russell.

Toni Elias, a former Moto2 World Champion and MotoGP race winner, was filling in on the Yoshimura Suzuki team for the injured Jake Lewis, but now that position is his for the remainder of the 2016 season. Lewis, meanwhile, is returning to action at VIR and has been moved to the M4 Suzuki team to allow the Spaniard to finish the season with Yoshimura. Lewis will compete for the remainder of the year in the Superstock 1000 class after earning Superbike rookie of the year honors in 2015.

Elias' three victories to start the season were the 174th, 175th and 176th AMA Superbike wins for Suzuki, the all-time leader for a manufacturer in victories. Yamaha, which won all 18 races in last year's MotoAmerica Superbike Series, got its 91st, 92nd and 93rd wins with Beaubier's three straight victories. That places them behind Suzuki and Honda. Honda has 116 Superbike class wins.

Josh Hayes is second on the all-time Superbike win list with 58 victories - 24 wins behind all-time leader Mat Mladin. Hayes won 10 races in 2015, eclipsing the seven he won in 2014. Hayes won both races here at VIR last year, topping Beaubier by 3.2 seconds in race one and Hayden by 13.3 seconds in race two.

With Hayes winning both races at VIR last year, it brought his Superbike win total at the track in Danville, Virginia, to five. Hayes also has four other class wins at VIR. Josh Herrin is another to have success at VIR. The Meen Motorsports Yamaha rider won three races in the now defunct Daytona SportBike class and came away with a victory last year in the Supersport class. Herrin now competes in the Superstock 1000 class for the same Meen Motorsports team that he rode for last year.

Defending MotoAmerica Supersport Champion JD Beach won race two at VIR last year, the first of six straight wins that propelled him to the title. Beach won his first race of the 2016 season in race one at NJMP two weeks ago.

Y.E.S./Graves Motorsports Yamaha's Garrett Gerloff was dominating this year's Supersport Championship until he crashed out of race two at NJMP. Even with the non-score in New Jersey, Gerloff still leads the title chase by two points over his teammate Beach. Gerloff started the season with three straight wins and the Texan says he's good to go for VIR and that his injured knee won't require surgery.

Toni Elias isn't the only new face from Europe in the MotoAmerica paddock. Italian Claudio Corti has joined the series for 2016 on the HSBK Aprilia team. Corti, who owns a bicycle shop in Italy, won his first career MotoAmerica race at Road Atlanta and then backed it up in New Jersey when he not only swept the two Bazzaz Superstock 1000 races but also put his Aprilia on the Superbike podium in both races.