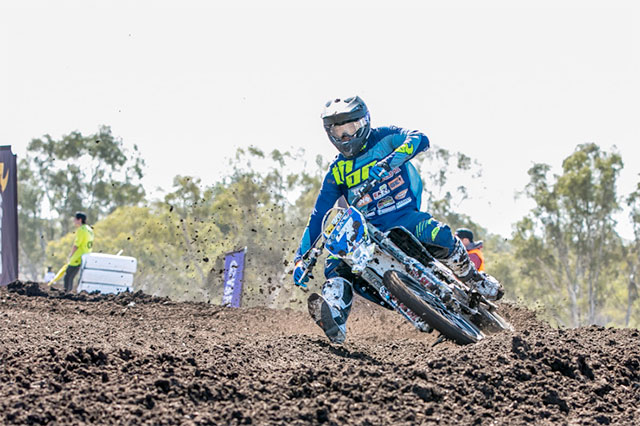 Husqvarna mounted Connor Tierney had a smile from ear to ear at the conclusion of racing today, going undefeated in the Pirelli MXD class at round one of the Motul MX Nationals in Horsham, Victoria.

The Pirelli MXD Class were treated to a well broken in Horsham circuit when they headed out for their practice and qualifying session this morning, as the host venue for began to fill with spectators.

Once qualifying had kicked off, it was anyone‰Ûªs guess as to which up and coming youngster would top the times, but it was Yamalube Yamaha Racing‰Ûªs Mitchell Evans who showcased his lightening fast speed ‰ÛÒ posting a 1:56.614 lap time, ahead of SD3 Husqvarna‰Ûªs Kaleb Barham, followed by fellow Husqvarna rider Connor Tierney who wrapped up qualifying with third gate pick.

When riders left the Rockwell Launch area, and gates dropped for the first time in the Pirelli MXD class, it was Tierney and Barham who jumped off the grid and began to put distance between themselves and the other competitors.

But after two laps were in the books, it was Tierney who stomped his authority on the Pirelli MXD class, moving into the early race lead ahead of Barham in second, while Zak Small and Copper Pozniak (KTM) slotted into third and fourth places.

By the half way point in the 20-minute moto, the running order saw Tierney maintain his lead on the field, followed by Barham, Small, Pozniak and Billy Harth. Justin Hart held down sixth position, while Raceline Pirelli KTM‰Ûªs Wade Kirkland slotted in to seventh.

As moto one reached it‰Ûªs closing stages, the only real change to the race order was Pozniak and Hill who had both got past the likes of Small to slot in to third and fourth places behind Tierney and Barham ‰ÛÒ both were untouchable in first and second positions.

When the last lap board was shown, Tierney was well set up to take his first race win of 2016. And when he crossed the line, the Husqvarna rider had plenty of reason to celebrate, taking the moto one victory ahead of Barham, while Pozniak launched over the finish line in third, in what was his first outing as a senior rider.

In fourth position was Yamalube Yamaha Racing‰Ûªs Jordan Hill, followed by Small, who despite his fantastic start concluded race one in fifth.

When race two kicked off for the Pirelli MXD class, Raceline Pirelli KTM‰Ûªs Wade Kirkland got to a flying started and settled in to the race lead ahead of race one winner Tierney in second, and Barham in third.

However, by lap two, Kirkland was relegated to second position when Husqvarna mounted Tierney showed that he wasn‰Ûªt prepared to be beaten ‰ÛÒ moving in to the race lead and beginning to check out on the field.

With Tierney and Kirkland out in front, the battle for third began to heat up on track, with Pozniak, Barham and Small banging bars for the final podium position. But it was the youngster Pozniak who managed to hold off his competitors, slotting in to third position behind the two front runners Tierney and Kirkland.

By the time final Pirelli MXD moto reached the half way point, Tierney continued to lead from Kirkland, followed by Pozniak in third and Small in fourth.

Barham managed to hold down fifth position, followed by Luke Abela and Hart in sixth and seventh places respectively.

However, when the chequered flag flew, it was Husqvarna‰Ûªs Tierney who went two from two, taking the final moto win from Kirkland who finished second, while Pozniak wrapped up the final moto for the day in third.

With two race wins to his name, Husqvarna‰Ûªs Tierney went undefeated to take the round one Pirelli MXD win, followed by young gun Pozniak (KTM) who concluded round one in second, while Barham wrapped up the season opener in third.

‰ÛÏI‰Ûªm pumped to be on the podium, you can‰Ûªt do much better than winning both motos,‰Û