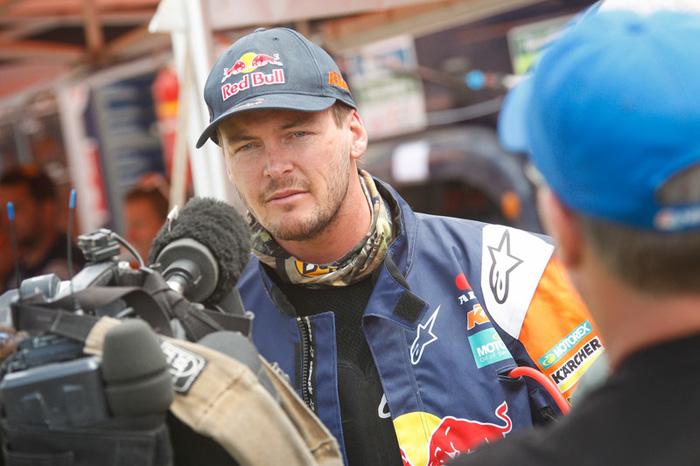 Australian Toby Price has moved to within 40 seconds of the outright lead in this years Dakar Rally with another stage win overnight.

Price's win on the sixth stage held in Uyuni, Bolivia marked his third stage win of the the 2016 Rally and his second straight stage win.

‰ÛÏIt wasn't a bad day at all." Price commented. "I'm actually pretty happy. I led for the whole course today and made the tracks. It's the first time I've done that, which I'm pretty stoked about.

"It didn't start off in the best way. Around 22 kilometres there were a couple of cows stuck in the sand. I went to go around one of them but it pulled in front of me and I hit it. So it wasn't the best start to the race.

"We just regrouped and made sure to be back on top of the road-book. It's been a good day, so I can't complain. There were a couple of tricky bits of navigation, but I just took my time with them and made sure I was on the right track.

"We didn't make any mistakes today so we're really happy with that and I think it puts us in a good spot now. So hopefully tomorrow we can do the same thing.

"For leading out the trail and leading out the tracks, I'm stoked at the pace I was going at. It's going to be a close fight all the way to the finishing line, I think. It's a long way away yet, but we're pushing hard and I'm pushing along nicely and feeling comfortable, so we'll see how we do.

"Once we get to the end of this first week and the second week kicks in a little bit, that's when these little things go wrong, plus the bikes have been through a lot already in the first week. So I think it's going to be pretty difficult at the finishing line of this one.

"The pace of the first week we've had so far has been up there pretty high, so compared to what last year's Dakar was, the pace of that first week wasn't that strong. But we're doing the best we can. As long as we minimise the mistakes, we should be pretty good‰Û