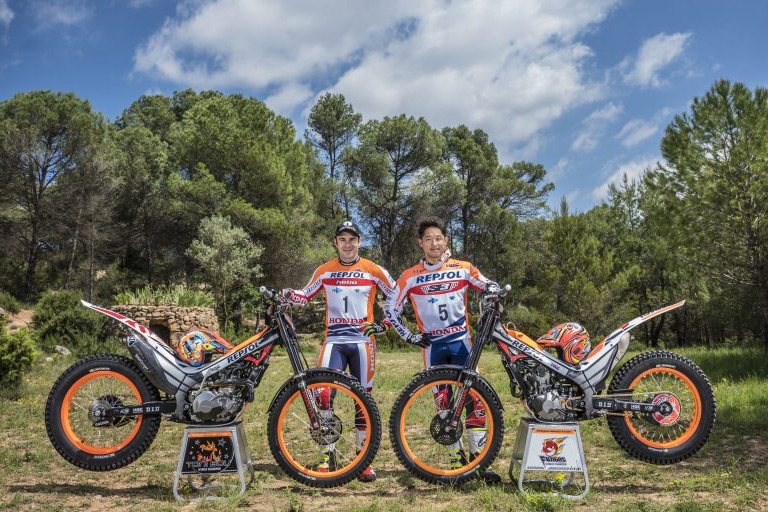 This weekend Repsol Honda Team will be present as the latest edition of the FIM TrialGP World Championship gets underway in CamprodÌ_n on Saturday, May 19th.

Toni Bou begins the campaign as incumbent world champion and hot favourite to add another title to his collection of eleven outdoor wins. The Repsol Honda Team ace, the most successful in motorcycle history, starts the championship with a tally of no less than twenty-three world titles, in both indoor and outdoor competitions.

In the GPs held so far in Spain, Toni Bou has clinched a total of thirteen victories in the event. One of the aims of the Repsol Honda Team rider is to achieve the record of victories in the world championship. Thus far, Bou has accumulated a total of 97 triumphs, so in order to overtake Dougie Lampkin‰Ûªs benchmark of 99 victories, Toni will need to prevail in three GPs.

"One of the most important moments of the season has arrived: the start of the TrialGP World Championship." Bou commented. "As always, it is important to start on the right foot in this first event, which will be held on home soil.

"After the injury I picked up during the X-Trial season, I won‰Ûªt be at 100% fitness just yet and I will have to be careful not to have any physical setbacks. It is something that has happened in previous seasons, starting without being physically on top form, but we have faith in the good work that we are doing, so we believe that we can balance it out.

"It will be a long and complicated season because the rivals are always pushing to achieve the same goals that we have. We can not relax and we will have to fight until the final section in every trial."
Meanwhile, Takahisa Fujinami, the rider with the highest number of participations in the world championship, will tackle a 23rd season in the discipline‰Ûªs top flight. Last year Fujigas finished in fifth place, completing twenty consecutive years of top five world championship finishes. The goal of the veteran Repsol Honda Team rider is to finish on the podium in as many races as possible.

"This first trial of the World Championship and will be very difficult for me." Fujiname explained. "With the fall that I had in the Spanish Championship I injured my shoulder, apart from other body blows and I am not yet recovered to tackle the event at full fitness.

"Nevertheless, we are going to try to defend as much as possible and hope that I can be fully recovered before the next trial at home."

The small Catalan town located in the Pyrenees last year hosted TrialGP for the first time in Spain and this year replicates with a similar route to that of 2017. The paddock will be located in the Puig Franco Hotel in the Font-RubÌ_ district.

In the first TrialGP qualifier Toni Bou was second, behind his then team-mate Jaime Busto. On the Sunday, with competitors battling a race hampered by heavy rain, Bou grabbed the victory with a superb second lap. Takahisa Fujinami came back from seventh position in qualifying to post a fifth final place.

This season also sees a change to the regulations, with the riders able to compete in the qualifying round for the event in reverse order according to the best time from the first qualifying lap. As usual, the score in the section and the time taken will be taken into consideration when deciding the race order. Like last year, the course will involve fifteen sections over two laps to decide the eventual winner.