The Pendulum Swings to Silverstone For Red Bull Rookies 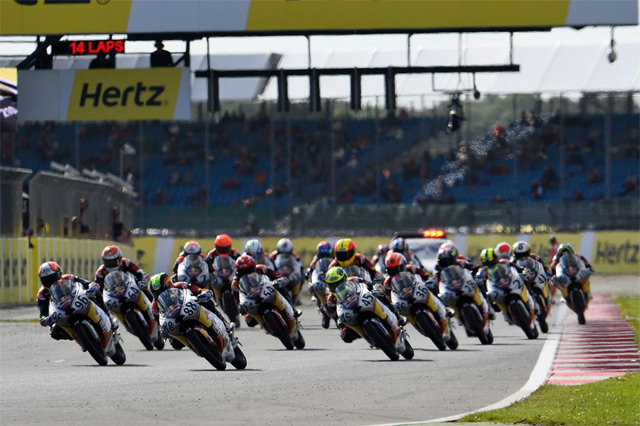 The early part of the season was all about Bo Bendsneyder and the 16-year-old Dutchman's five wins in a row.

Race six was Fabio Di Giannantonio's as the 16-year-old Italian not only took the win in Race 2 at the Sachsenring but cut Bendsneyder‰Ûªs points advantage to just 16 when the Netherlander fell at the final corner.

Di Giannantonio gave the pendulum another firm nudge in his direction with pole and Race 1 victory in the Czech Republic but it slipped out of his hands when he fell on lap one of Race 2. Then Bendsneyder's sensational last corner victory gave him the momentum and a 36 point advantage heading into the second half of the season.

There are still five races to go and anything can happen, just who will gain the upper hand in the two races at Silverstone this coming weekend is as unpredictable as any Rookies Cup race and it is not just in the hands of the two points leaders.

Oscar Gutierrez is overdue for a win, the 16-year-old Spaniard has already had two seconds and two thirds this year and stands third in the points just ahead of fellow countryman 15-year-old Marc Garcia who has racked up a second and two thirds for himself.

Of the current Rookies it was definitely Bendsneyder who did best at Silverstone last year with a third in Race 2 but he will have to be at his best this time to keep ahead of the newcomers like 14-year-old Japanese Ayumu Sasaki and his 15-year-old compatriot Kaito Toba. They have both been on the podium this year and have no problem learning circuits quickly.

Other first year Rookies to watch out for include 14-year-old Spaniard Raul Fernandez who was a brilliant third in Race 1 at Brno and only missed out on possible victory in Race 2 when he clashed with Enzo Boulom at the final corner.

Fellow Spaniards 14-year-old Aleix Viu and 15-year-old Rufino Florido have both looked likely podium boys but didn't have the races they hoped for in the Czech Republic.

Boulom has taken a huge step forward this season and when the 18-year-old Frenchman has the bike setting he needs can match anyone. He considers that he was robbed of victory in Race 2 at Brno and it was a very fine ride, perhaps he is the man to watch when he crosses 'la Manche' for this weekend's action.

Coming south of Hadrian's wall is Rory Skinner and the 13-year-old Scot has been steadily improving through his first Rookies Cup season, is regularly in the points and will be looking to break into the top ten.

This weekend's Rookies Cup races can be seen live on www.redbull.tv