The inside line of the 2017 Yamaha AORC 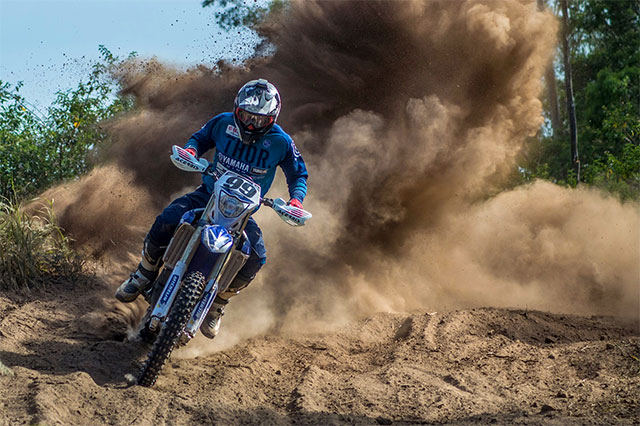 Rounds One and Two of the Yamaha Australian Off Road Championship (AORC) are rapidly approaching, taking place April 8 & 9.

The Yamaha AORC in 2017 will be a year of significant transition, full of excitement and possibilities making it a thrilling year with an increased number of riders all fighting for the Championship crown.

As competitors line bikes up at Dungog in New South Wales, a host of new names and past champions will be vying for the coveted Yamaha Australian Off Road Championship title. Last year‰Ûªs E3 class (290cc to 500cc 2-stroke & 475cc to 650cc 4-stroke) champion, Daniel 'Chucky' Sanders is now competing in the 2017 Enduro GP in Europe meaning the AORC E3 class is wide open for new challengers. This year‰Ûªs Championship will continue to use the double-header format, with a total of 12 exciting Rounds to be played out nationally.

The hotly contested E1 class (100cc to 200cc 2-stroke & 150cc to 250cc 4-stroke) again see's Jack Simpson racing on a privateer KTM. Simpson looking to defend his E1 championship, winning in his first year of AORC, 2016. In his second year, Simpson won't be giving away one inch to the swathe of new comers, in the fight to retain his E1 title. Previous Off Road Champion, Husqvarna mounted Glenn Kearney announced is retirement from riding in 2016, now placing his focus in to being the 2017 KTM Enduro Racing Team Manager.

Privateer KTM mounted rider Jack Simpson will be looking to take out the E1 class again for a second year running. He won‰Ûªt have it all his own way though, with Active8 Yamaha Yamalube rider Will Reprecht (2016 Transmoto EJ Champion) will be looking to challenge for the title. Fellow privateer, Yamaha rider and AORC mainstay Stefan Granquist missed the back end of last season due to injury. Grandquist will agitate the pack, looking to keep things interesting. Brad Hardaker is a name that will also be pushing hard to get to the podium- yet another interesting battle to be played out on the E1 Championship battlefield.

With E2 (220cc to 250cc 2-stroke & 275cc to 450cc 4-stroke) Champions, Tye Simmonds and Chris Hollis not competing at AORC , the E2 class is also wide open with a host of new challengers. Privateer Riley Grahams looks to E2 as a new challenge after competing strong in E1 and taking out third overall in 2016. He will go up against team riders Josh Green (Activ8 Yamaha Yamalube) and former AORC Champion. Green missed a big chunk of last year after injury, partway through the championship. but is back in fine form as a potent contender and looks to be in great physical condition after a fantastic Australian Four Day Enduro, picking up the E1 Class Win.

Daniel Milner is back from his stint in America. Milner will look to shake up the E2 class, after switching from Yamaha to now race with KTM Enduro Racing Team. Broc Grabham who has now gained a team ride with Husquava Enduro Racing and will look to get ahead with a strong team set up. Of course no one can count out long time AORC Veteran, Peter Boyle who will surely take home a few race wins on his Honda.

In E3 Hasqvana Enduro Racing team rider, Lachlan Stanford, will look to attain supremacy. With Daniel 'Chucky' Sanders taking off to battle internationally at the Enduro GP for Factory KTM, it leaves a very open E3 class to duke it out. Victorian and mate of Chucky, Lyndon Snodgrass will mix things up in E3 after signing a ride with KTM Enduro Raicng Team. New DSR Motul Pirelli Sherco rider, Andy Wilksch is new to the team but definitely not new to the AORC and will be give the other contenders a run for their money. Don‰Ûªt count out Active8 Yamaha Yamalube rider Beau Ralston who will be looking to get back to his best and stamp his authority in the E3 class. Beau was very solid in 2016, with podiums all year round except for one DNF that derailed his championship hopes.

In the EJ (all powers-under 19 years) class, new DSR Motul Perelli Sherco rider Nic Tomlinson and Husky mounted Fraser Higlett will look to challenge after being runners up in the class last year. A number of the J4 (125cc to 200cc 2-stroke & 200cc to 250cc 4-stroke - up to 15 years) riders, including Mitten brothers; Zac and Tom, who will both have their first taste of Senior action. Michael Driscoll is another competitor straight out of Junior ranking and has a real talent for Off Road racing and will look to show the Seniors what he is made of, after a strong showing at the NSW State Championships.

Stay tuned throughout the racing year in 2017, for all the thrills and spills of the Yamaha AORC, be sure to witness this year‰Ûªs Championship Rounds to see what surprises lay in store.

Picture: Josh Green on his Yamaha