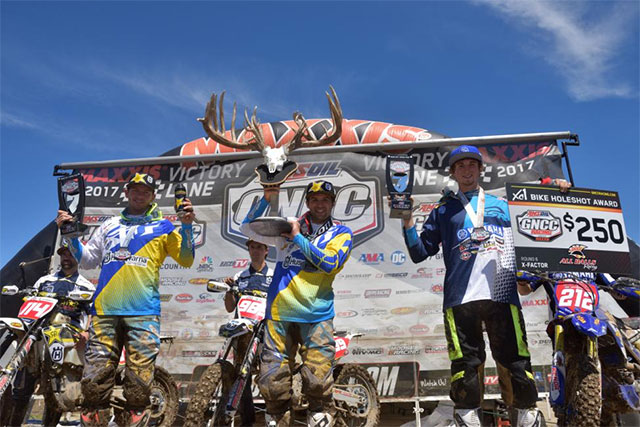 For the first time since 2013's Mammoth GNCC, Racer Productions made the decision to combine the morning amateur race with the afternoon pro race.

At the conclusion of the two-hour race on an 8-mile long racecourse it was Rockstar Energy/Factory Husqvarna Racing's Thad Duvall who took home his first overall win of the season. However, it would not be an easy task for Duvall as it was N-Fab AmPro Yamaha's Ricky Russell who got the $250 All Balls Racing Holeshot Award. R Russell led the first two laps, but would eventually fall back two positions ultimately earning his season best finish of third overall.

Duvall's teammate, Josh Strang, was also off to a good start where he would work his way into his first 2nd place finish of the season by the end of the four-lap race. FMF/Maxxis/RPM KTM Racing Team's Chris Bach finished just off the podium with his second 4th overall finish in 2017. 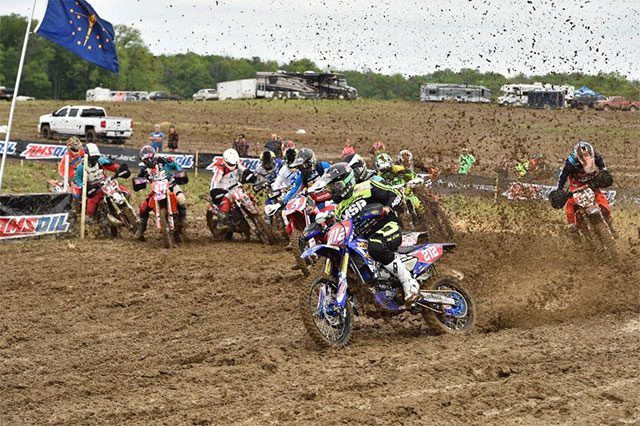 Ricky Russell was off to a good start, and grabbed the $250 All Balls Racing holeshot award to start his day. Credit: Ken Hill
After a favorable start behind R Russell, Beta USA's Jordan Ashburn would find himself tangled in a power washer cord after a brief pit stop. Ashburn would fall back to 8th as he checked into timing and scoring on the first lap, but put on a hard charge eventually ended the day with an remarkable fifth overall.

After heading into the woods in the back of the XC1 pack, JCR Honda's Trevor Bollinger plowed his way through the mud for a sixth place finish in XC1 and an 11th overall. Rocky Mountain ATV*MC/KR4/Husqvarna-backed rider Grant Baylor started the day with an unfavorable 11th place position as they came around the course after one lap. G Baylor would work his way up to 7th in XC1, while still finishing just outside the top 10 overall in 12th.

FMF/KTM Factory Racing and defending GNCC National Champion, Kailub Russell found himself heading into the woods last off the start after falling in the second turn with another rider. K Russell and teammate, Russell Bobbitt, would finish the day out in the 8th and 9th place positions of the XC1 Pro class. K Russell would finish 14th overall, while Bobbitt salvaged a 20th overall finish. SRT/KTM rider, and round 1 winner, Steward Baylor completed his first lap in the fourth place position. Unfortunately this was the only glimpse anyone caught of S Baylor, as his race ended after that first lap due to an illness. 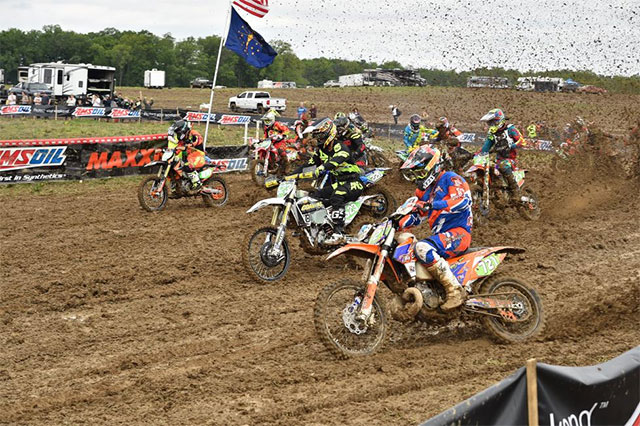 Zach Nolan (#721) earned himself the XC2 250 Pro holeshot award, and the class win today in Peru, Indiana. Credit: Ken Hill
As a result of rule violations, the results from today's XC2 250 Pro (16-24) class and the WXC class are provisional and pending approval of additional evidence.

Tely Energy's Zach Nolan got a quick jump off the second line earning himself the XC2 250 Pro $100 Hot Cams Holeshot Award. Nolan found himself in first overall as they came through timing and scoring on the first lap, but after four laps of intense racing would finish 6th overall. However, the West Virginia native Nolan would earn his first XC2 250 Pro class win of the season holding off RPM/KTM's Mike Witkwoski and Coastal Racing/Husqvarna's Craig Delong who rounded out the podium. Current XC2 250 Pro points leader N-Fab AmPro Yamaha's Josh Toth had an unfavorable start, but managed to salvage a 4th place class finish in the muddy conditions.

The 2017 AMSOIL Grand National Cross Country Series resumes next weekend, May 27 and 28, with the Wiseco John Penton GNCC in Millfield, Ohio.