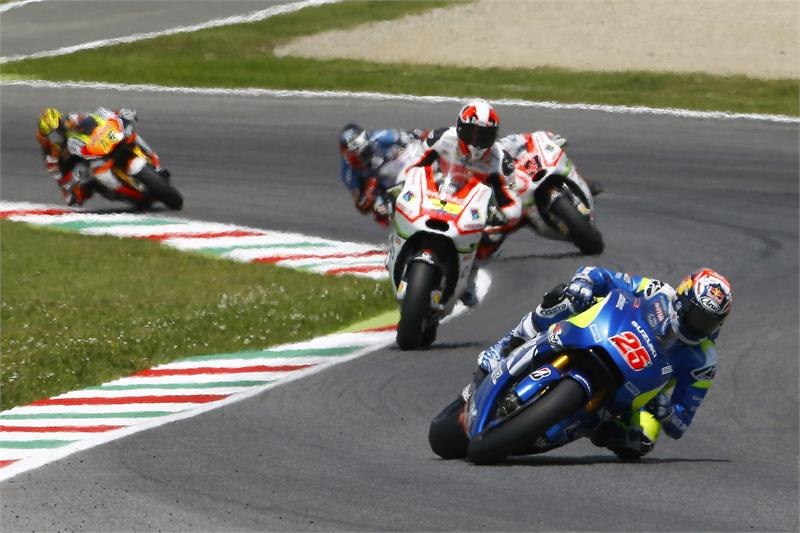 The Sachsenring circuit in Germany is awaiting the MotoGP‰ã¢ riders for the ninth Grand Prix of the season, the last before the summer break, which marks the half-way point of the Championship.

Aleix Espargaro and Maverick ViÌ±ales are approaching the German race with renewed enthusiasm, after the positive results obtained at Assen, with their consistent performances in qualifying and yet more points in the World Championship standings.

The history of the Sachsenring circuit is a recent one: initially born as a natural evolution of an open-road race track, it was completely renewed in 2001 to be capable to host bigger events. With a total length of 3.7 km (2.28 miles) and a 700 metre-long straight it is one of the slowest tracks of the championship, comprising only three right-hand corners and 10 left-hand corners.

Team SUZUKI ECSTAR will approach the GP of Germany with much pride concerning the 30-year history of the Suzuki GSX-R, the sport bike that was firstly introduced back in 1985. This will be the perfect chance to celebrate the long history of its successes, not only in races but also in the marketplace, thanks to the huge number of fans who have bought and owned GSX-Rs over the last three decades.

At Sachsenring the two GSX-RRs ridden by Aleix EspargarÌ_ and Maverick ViÌ±ales will have a special-edition livery that will pay tribute to the white and blue colour scheme that was made famous by the many AMA wins of the original machine‰Ûªs famous rider Kevin Schwantz.

‰ÛÏI feel positive for the German race because in the last Grand Prix we showed consistent improvements, mainly in practices but also in races." Espargaro stated. "We still have a lot of work in the development, but in each race we‰Ûªre getting closer and closer. Sachsenring is a very tight track and not so fast, which could be positive for our GSX-RR because handling and cornering will be crucial, and we have very effective machines on this side of the performance envelope.

"Of course being new we lack information about the basic set-up at the circuit, but at this point of the season this is nothing new and we are used to getting to know the new tracks in the very first practice sessions, therefore we will try to be competitive from the beginning. In this race we will debut a special livery that pays tribute to the old racing glories of Suzuki and this will make the event pretty emotional for me.‰Û