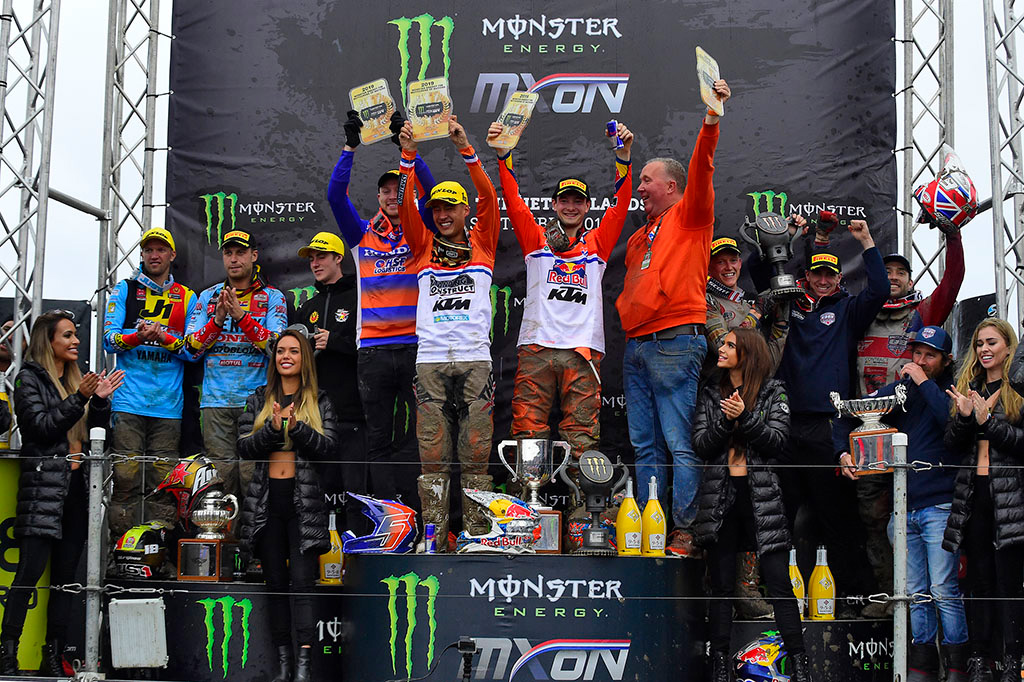 Team Netherlands went into the 73rd Monster Energy Motocross of Nations as heavy favourites and came out with an historic win as riders Glenn Coldenhoff, Jeffrey Herlings and Calvin Vlaanderen dominated the rest of the World.

Despite a rainstorm that lashed the white sand of Assenleaving the circuit saturated, thousands were in attendance with the stands of the famed TT-circuit filled with loud cheers and colours of the national flags. The atmosphere was incredible as 20 nations battled it out for pride and glory for their home country as well as the highly sought after Chamberlain trophy.

Team Netherlands‰Ûª Coldenhoff with a 1-1 score for the second year running, Herlings with 2-4 and Vlaanderen with 10-10 that saw them cruise to their win with 18 points (taking out the worst score of 10th).


Second overall was Team Belgium as Jeremy Van Horebeek, Kevin Strijbos and Jago Geerts were consistent enough for yet another podium with 47 points, and third overall was Team Great Britain with Shaun Simpson, Nathan Watson and Adam Sterry on 58 points.

Overall class winners were Team Slovenian‰Ûªs Tim Gajser in the MXGP class with 1-2, Team Denmark‰Ûªs Thomas Kjer Olsen in the MX2 class with 8-8 and Team Netherlands‰Ûª Glenn Coldenhoff in the Open class with his 1-1. 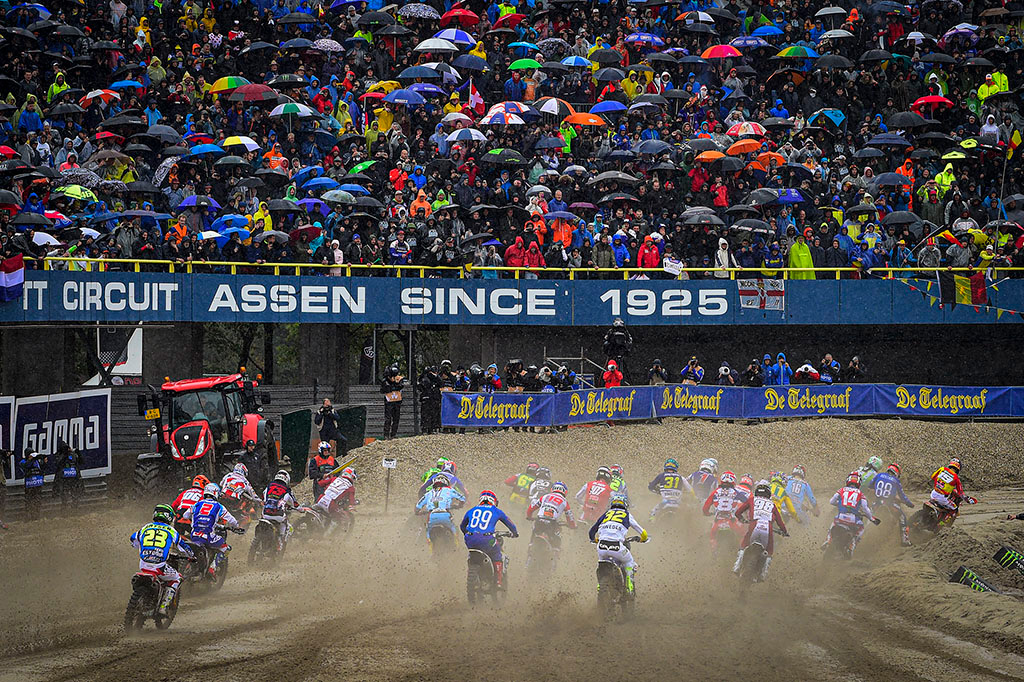 Conditions where horrendous for all three races as the rain persisted through the entire event.
Race 1 (MXGP + MX2)

Webster‰Ûªs bike got stuck in the mud and dropped well back in the field to 16th place as Cooper was still riding, but dead last.

Ferris went down and dropped to ninth place while after eight laps it was Prado leading with more than three seconds over Gajser. At lap 10 Gajser passed Prado for the lead while Seewer was third, followed by Van Horebeek in fourth and Monticelli in fifth. Herlings moved into fifth place and then passed Van Horebeek to move into fourth closing up on the leaders.

Herlings was on fire, two seconds a lap quicker than the leaders. After 14 laps it was Gasjer with six seconds over Herlings, then came Seewer, Van Horebeek, Paulin, Prado, Monticelli, Olsen, Fredriksen, and Vlaanderen into the top ten. Anderson was up to 14th place and Ferris 17th.

Herlings was right up on Gajser with two laps to go, as he moves into take the lead. As Geerts found himself in 20th place and then out of the race with a broken bike, Belgium suddenly dropped from second to fifth in the standings. Anderson moved up to 13th as Gajser took the win from Herlings and Seewer. The Netherlands going 2-10 for a big lead with Switzerland on 23 points and third were France also with 23 points.

From an Australian stand point the conditions bit hard with both Ferris and Webster struggling with Ferris finishing 15th and Webster 23rd after recovering from being bogged. 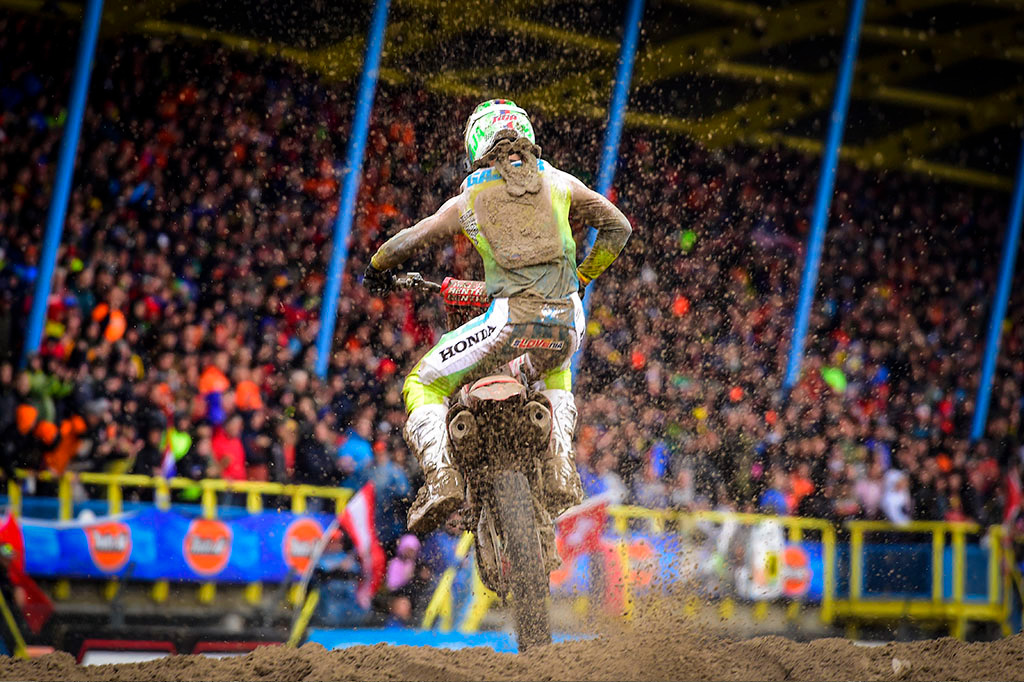 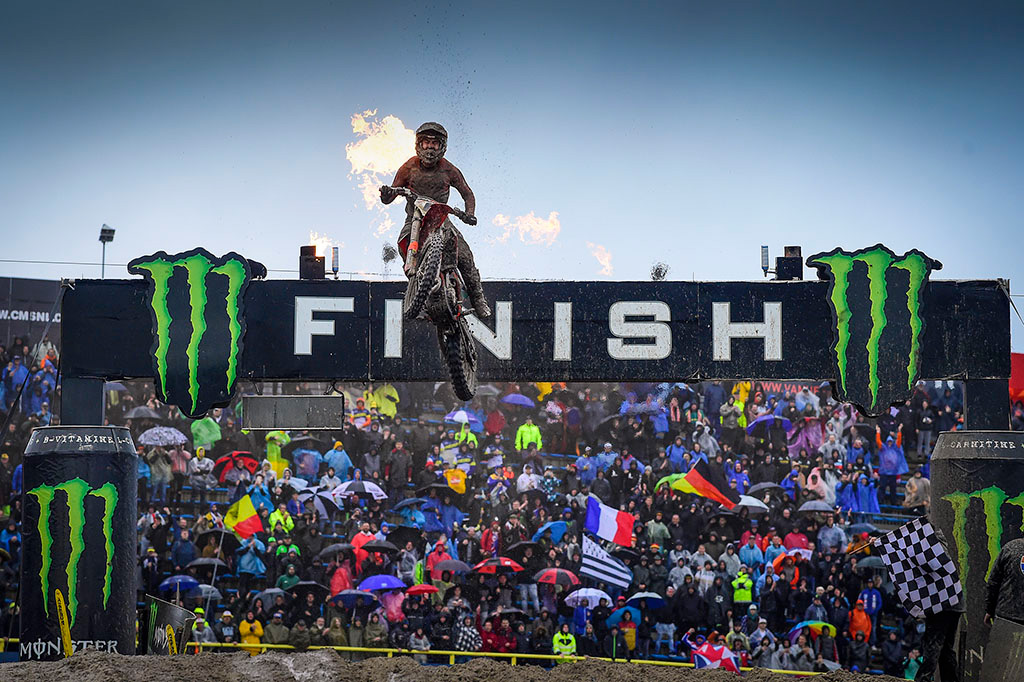 Glenn Coldenhoff was the star of the event taking the in in both the MX2 + Open and the MXGP + Open classes to help the Netherlands to an historic win,
Race 2 (MX2 + Open)

Jonass moved into third place and Vlaanderen did fly into eight place as he closed up on Osborne. Olsen also was on the move as he passed Vlaanderen and then passed Osborne. After four laps it was Coldenhoff with a 10 second lead, then Jonass, Simpson, Kullas and Ullrich.

Coldenhoff continued to lead with more than five seconds over Jonass, then Simpson with a further 33 seconds back while Kullas was still fifth. Then came Osborne, Ullrich, Tixier, Olsen, Geerts and Vlaanderen. Coldenhoff won the second heat from Jonass and Simpson.

Australia's luck didn't get much better in race two but it was the best result with Regan Duffy taking Team Australia's best finish for the day with 11th while Webster had a better race, running with the leaders early until finishing back in 14th. With conditions causing havoc though with other countries the result was still a good one elevating Australia to 5th in the nations standings and still in the mix for a podium. 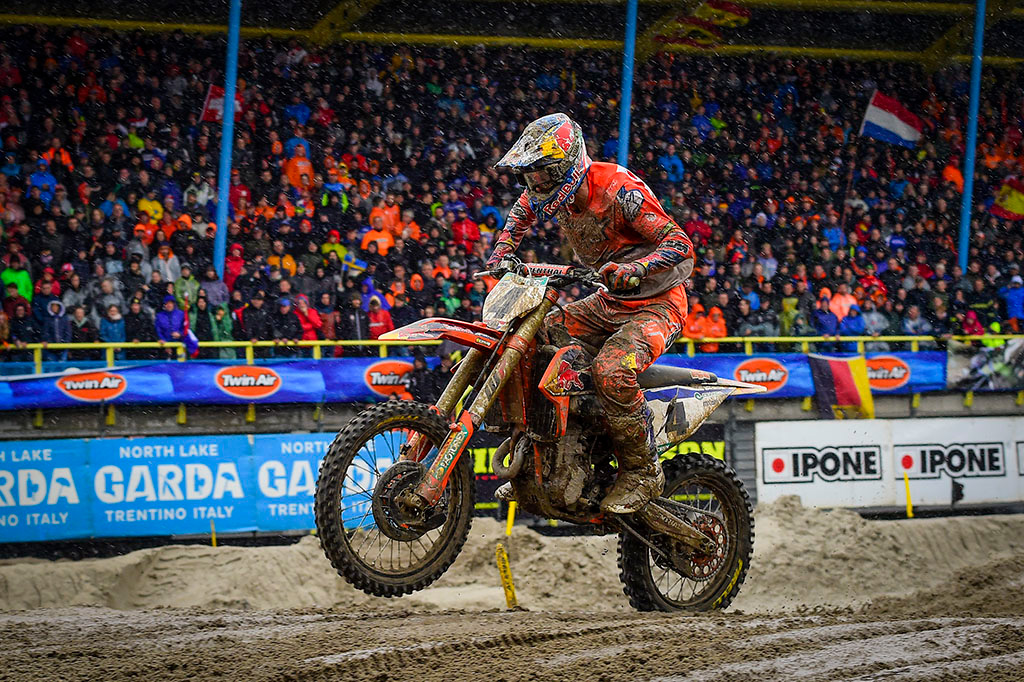 Jeffrey Herlings' 4th place in the final race and the win to Coldenhoff cemented the Netherlands win.
Race 3 (MXGP + Open)

Gajser rode really well in front with more than a two-second lead over Van Horebeek while Herlings was on the move as he passed Prado and Paulin. Gajser crashed and Van Horebeek took the lead and Coldenhoff was into second place.

Coldenhoff took the lead and the Dutch were on their way to the top of the podium. Herlings moved into 10thplace as the top ten was Coldenhoff, Van Horebeek, Gajser, Jonass, Seewer, Watson, Anderson, Simpson, Monticelli, and Herlings. Herlings then made the move into ninth as he passed Simpson and Anderson passed Watson for sixth position.

After six laps it was Coldenhoff with a six second lead over Van Horebeek, with Gajser third. Herlings crashed and dropped back to 11thplace. While Herlings moved back into the top 10 in ninth position, his team-mate Coldenhoff continued to lead over Gajser and Van Horebeek. Prado was up to eight place just behind Anderson and Watson.

Jonass moved past Van Horebeek for third place while Osborne continued to struggle in 16thposition. Gajser started closing up on Coldenhoff for the lead, and Herlings moved into seventh place, with Prado eight, Watson ninth and Paulin 10th.

Coldenhoff continued to control the race up front, leading by four seconds with Gajser second and Jonass third. Herlings moved into sixth place, dropping Anderson to seventh and Prado was also closing up on the American. Paulin dropped out of the race with machine problems and put Team Great Britain on the podium for the third year in a row. Coldenhoff won the race for The Netherlands ahead of Gajser and Jonass ensuring the first ever victory of Team Netherlands in history.

Race three proved a disaster for Australia with both Ferris and Duffy failing to finish and classed as 30th and 33rd respectivly. 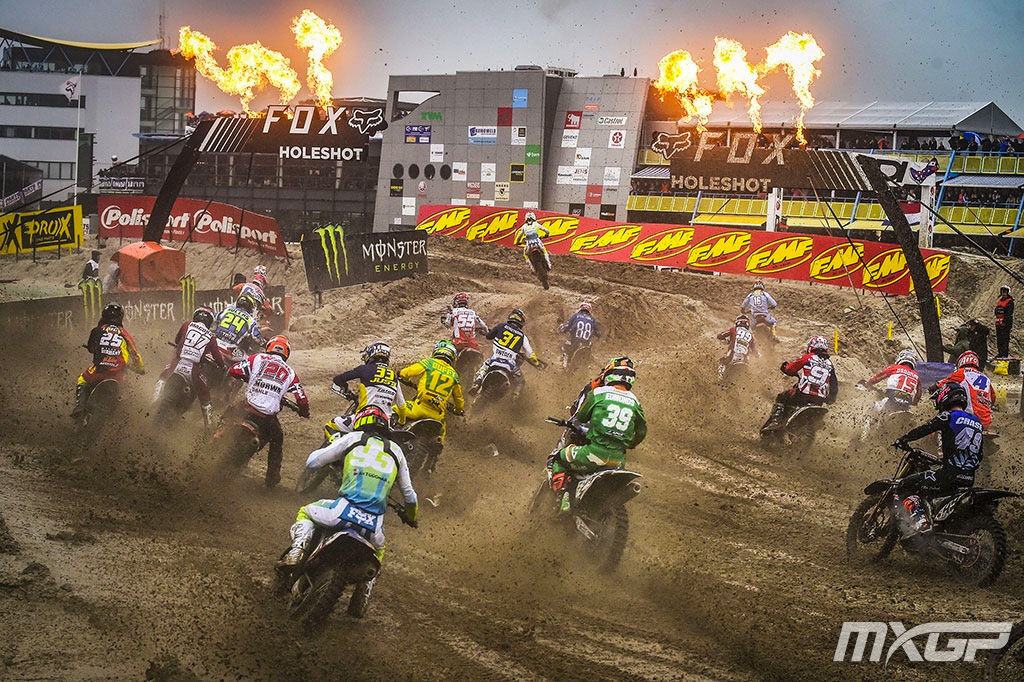 Regan Duffy (12) finished with Australia's highest placing with 11th (MX2 + Open Race) but a DNF for both him and Dean Ferris in the final moto soured what was a strong effort for the Australian Team.
As usual, the Monster Energy FIM Motocross of Nations can be very unpredictable, and nothing can be confirmed until the final race is finished. This year was no exception. By race two, The Netherlands had a comfortable lead, but it was all to play for, for second and third position.

In the beginning of the third and final race, Great Britain were second in the standings, but as Jordi Tixier and Gautier Paulin of team France started making their way through the field, this saw Britain drop from the podium, allowing last year‰Ûªs defending champions, to move up. But nothing was final until the end of the race and with just a lap to go, disaster struck team France as their leading man, Gautier Paulin, was forced to retire from the race with a technical issue, allowing Great Britain back onto the podium, making in their third consecutive podium finish in the last three years.

Also receiving an award this weekend, was Austria‰Ûªs RenÌ© Hofer who was the recipient of the Ricky Carmichael MXoN youngest talent Award. Hofer had a good ride and despite the tough track conditions and the disadvantage of riding a 250cc bike, the Austrian finished 12-26 in the races. Next season, Hofer will be making the move to the Red Bull Factory KTM squad to compete in the MX2 World Championship. 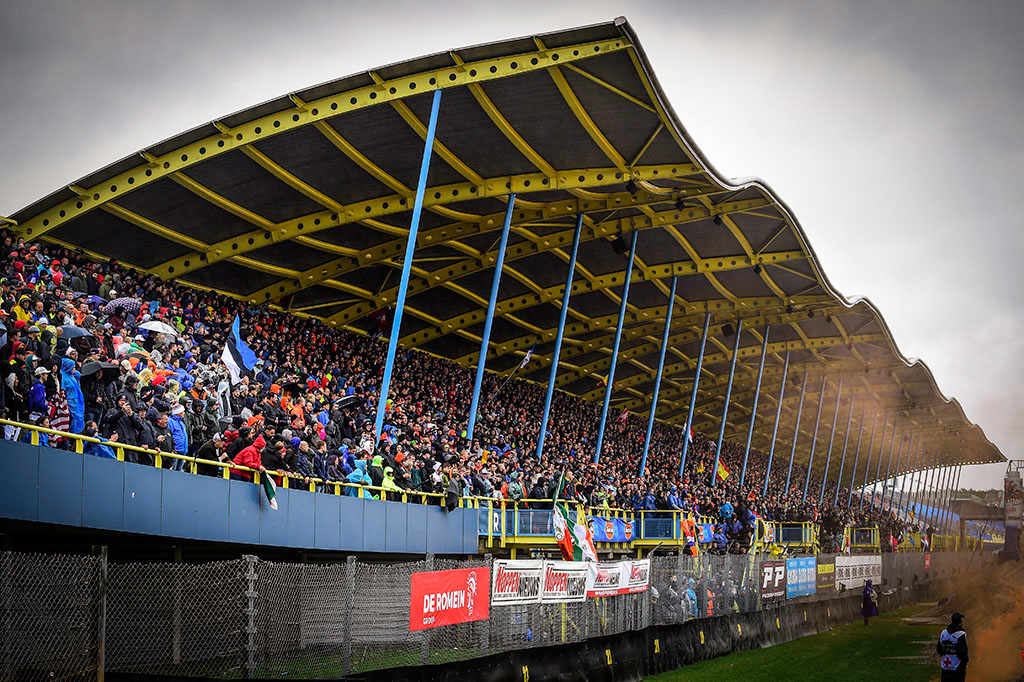 One positive thing about the Assen TT circuit is the grand stand has a roof so the crowd don't have to endure the rain.