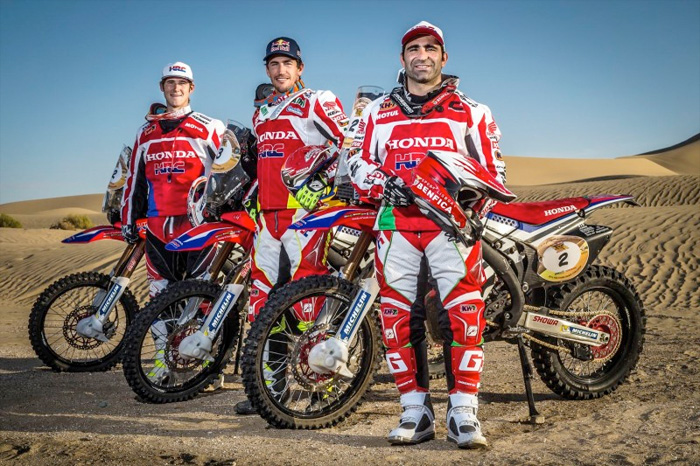 Team HRC Rally are all set to tackle the sixth edition of Argentina‰Ûªs Desafio Ruta 40 which heads out from Catamarca on Tuesday May 19 before winding up ‰ÛÒ after five days of racing ‰ÛÒ in Villa Union on Saturday May 23.

The Ruta 40 forms part of the Dakar Series and will be the first of three competitions to be held on South America soil; second up will be Paraguay‰Ûªs Desafio Guarani in July, with the Desafio Inca in Peru rounding off the series later in September.

Team HRC will be lining up Joan Barreda, Paulo Goncalves and rookie Ricky Brabec for the Ruta 40 challenge. The event will give Team HRC further opportunity to test the CRF 450 Rally and simulate the terrain and conditions that the riders are likely to encounter in Argentina at the forthcoming Dakar 2016.

Argentina‰Ûªs national rally champion Javier Pizzolito couldn‰Ûªt miss out on the race on home soil and will be entrusted with a CRF 450 Rally HRC under the auspices of Mariano Casaroli‰Ûªs MEC team.

"The Ruta 40 is particularly important for rider training, as well as a test for making certain technical choices for our CRF 450 Rally ahead of the forthcoming Dakar 2016." Martino Bianchi Team HRC General Manager said. "The team will, for the second time this year, be able to put Californian rookie Ricky Brabec to the test after his outstanding fifth place in his first rally in Abu Dhabi.

"The navigation and Road Book interpretation will be tougher out here in Argentina so we will be able to take a closer look at his rally skills. It will be a great pleasure also to support Javier Pizzolito who will be backed by the Argentinean MEC team, who we would like to thank for all the logistic assistance that they have supplied for such a long trip.

Top Image: Team HRC in Argentina for the Desafio Ruta 40