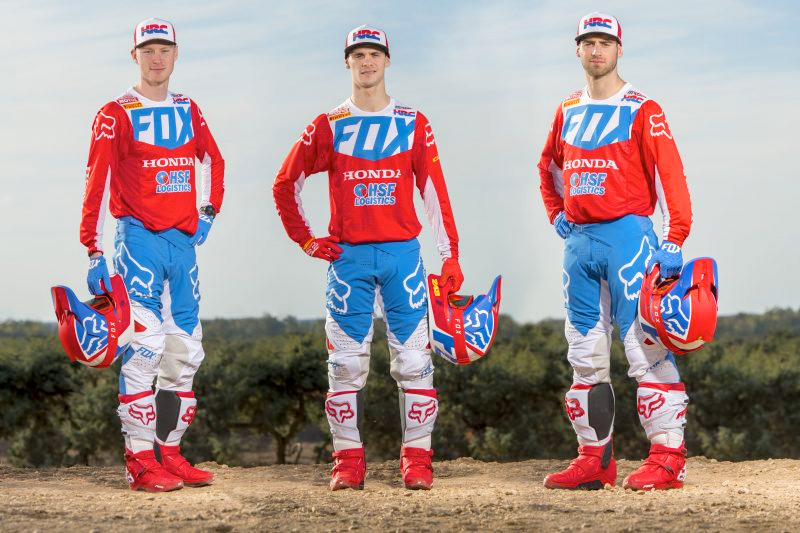 Calvin Vlaanderen (L), Tim Gajser (C) and Brian Bogers will make up the HRC MXGP Team again in 2019. Photo: Bavo
Team HRC will once again feature three riders as they begin their assault on reclaiming the 2019 MXGP and MX2 motocross world championship titles.

The unchanged lineup of Tim Gajser (MXGP), Brian Bogers (MXGP) and Calvin Vlaanderen (MX2) have another year under their belts with the factory Honda team and will head to the Argentinian opener on March 3rd full of confidence that they can challenge for honours. 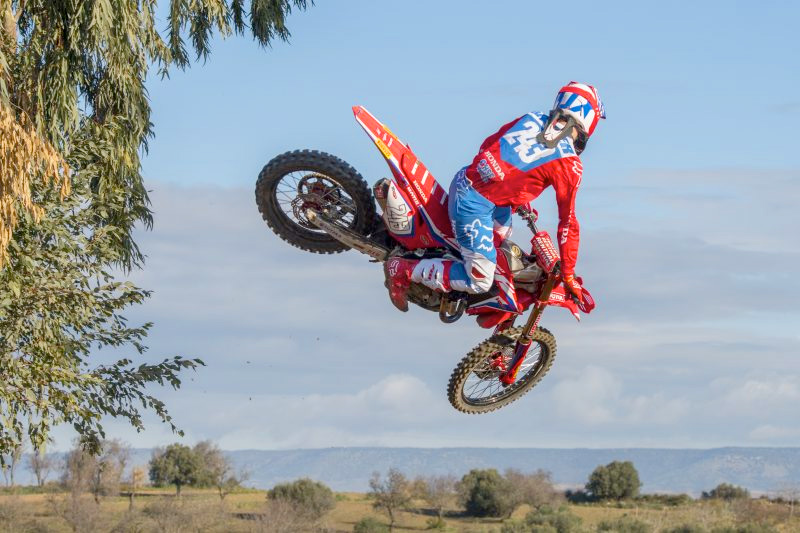 Tim Gajser goes into his sixth season with HRC and will be hoping to give himself and the team their second MX1 class World Championship. Photo: Bavo
Slovenian double world champion Tim Gajser finished off the 2018 season strongly with multiple podiums positions, and he‰Ûªll be hoping to continue that good form when the 2019 campaign gets underway in Villa La Angostura, where he took victory in 2017 with a double-moto win. With three top-two finishes in the last four events, Gajser is looking for even better results as he bids to get back the MXGP crown that he won on his Honda CRF450RW in 2016.

"It‰Ûªs a pleasure to have been with the Honda family for six years so I‰Ûªm really happy to continue this relationship and we are just one big family," Gajser said. "I know everybody in the team and I feel really comfortable because they all want to help me do better each weekend. Already I can tell that the Honda CRF450RW is good, but we have some final tests this week before some pre-season races to try and improve it even more. Then we move onto Argentina and I can‰Ûªt wait for the MXGP events to begin!" 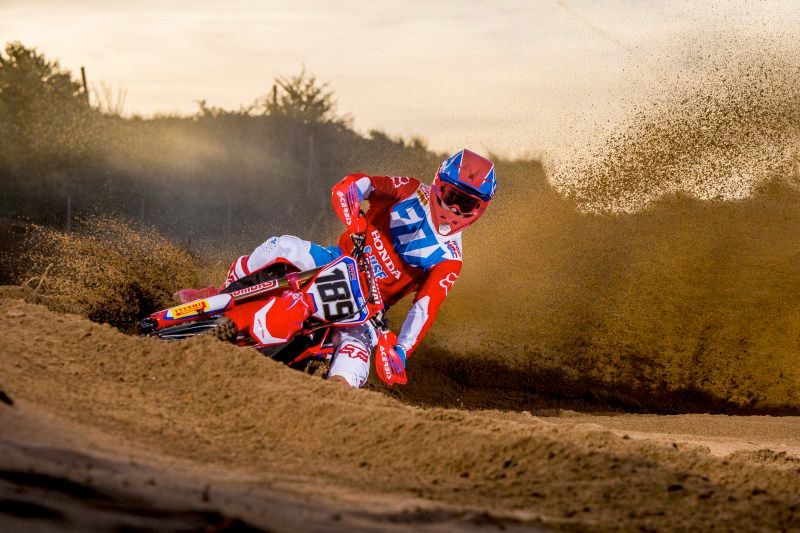 After missing 90% of the 2019 season with injury, Brian Bogers is looking to make his mark in 2019. Photo: Bavo.
After an injury-hit 2018, Brian Bogers is hoping to put all that behind him and focus on having a successful campaign this year with Team HRC. The young Dutch rider only completed one event in what would have been his debut season in the MXGP class, but after a good off-season this winter, he is ready to show the world what he is truly capable of.

"Everything is looking very good right now," Bodgers said. "We are working very hard to get ready for the season but the bike and team are amazing to work with. I‰Ûªm really looking forward to this 2019 season because I want to get back in the rhythm of racing MXGPs again, after missing so much of the 2018 campaign. I know it will take a few races but I know for sure it will work because everyone is trying so hard to make it happen." 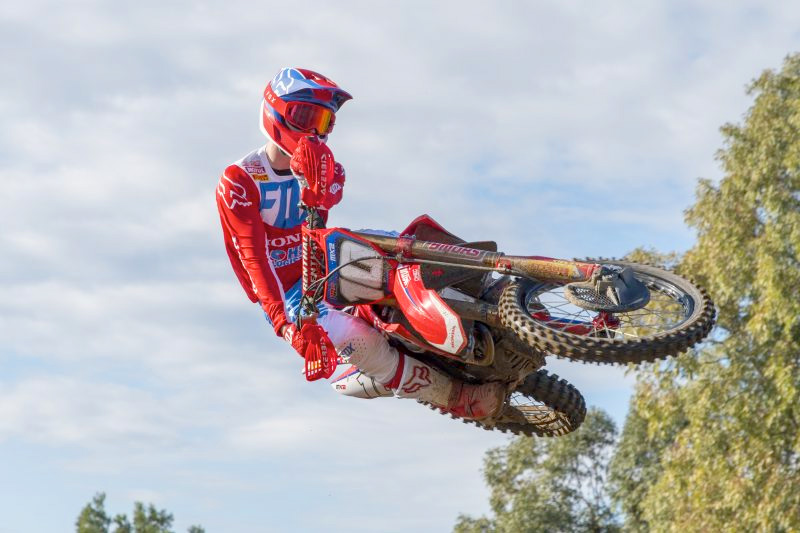 Going into 2019 as a GP winner, South African Calvin Vlaanderen will represent the team in the MX2 class once again. Photo: Bavo
Calvin Vlaanderen returns aboard his Honda CRF250RW as he looks to challenge the best riders in the world in the MX2 championship. After placing sixth last year, Vlaanderen will look to climb the rankings in 2019 and add to his maiden overall victory which he achieved at the MXGP of Indonesia. He will also be hoping to improve upon his nine top-three moto results and five podium finishes, in what is an extremely competitive 250cc class.

"So far the off-season has gone well and we are on track for where we need to be right now," Vlaanderen explained. "My hopes for the season are quite high and I would like to get more podiums and obviously more wins. However, the main goal is that I want to be fighting in the top three of the championship and that means I have to improve upon some of the things that I learnt last year. The reassuring thing is that I believe I have the bike and the team around me which can help me achieve that."

HRC General Manager - MXGP - Marcus Pereira de Freitas is looking for better results with the same team having a year under their belt.

"With one year under our belts with this rider line-up, I believe that we can we do even better and maintain the progress and consistency for 2019," de Freitas said.

"Tim finished 2018 strongly and he is really excited for the season to get started so he can continue that good form. Calvin is also extremely motivated to add to his victory at the MXGP of Indonesia last year and has worked very hard over the off season to try and make that happen.

"As for Brian, his attitude has been impressive after missing almost all of last year and he‰Ûªs looked really good on the Honda CRF450RW in all our testing so far. There is a real energy with this whole team and I can‰Ûªt wait for the first gate drop in Argentina!" 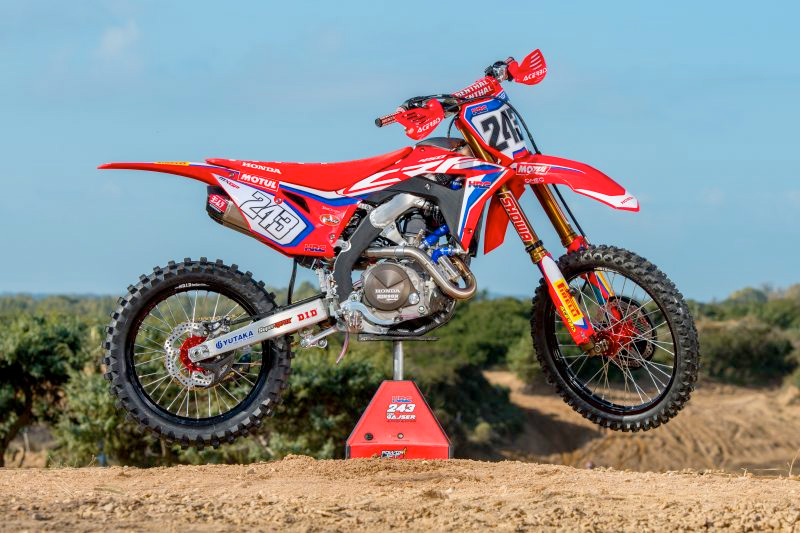