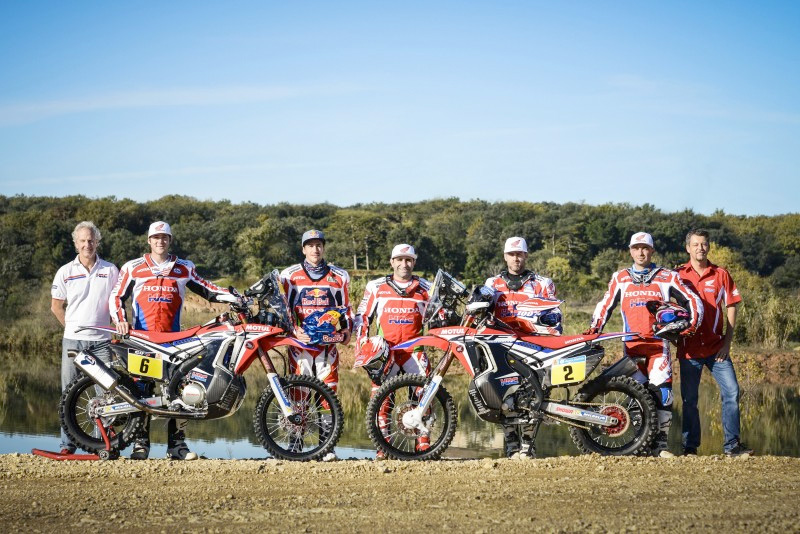 Spazio Campari, near Milan, hosted the unveiling of the new 2016 Honda models in an event which featured a strong Team HRC presence including the new team for the Dakar 2016 Rally.

The squad who will represent Team HRC in the 38th Rally Dakar were present: Joan Barreda, Michael Metge, Paolo Ceci, Ricky Brabec and Paulo Goncalves, who got to start up the powerful Honda CRF450 RALLY. The stage was shared with the brand new Africa Twin which went on display to the public for the first time.

Team HRC are readying themselves for the great odyssey: the 2016 Dakar Rally, a race that the Team have painstakingly prepared throughout teh season. It will be a very solid Team HRC that tackles the great rally challenge which gets underway in January 2016. This will be the fourth consecutive participation since the team officially re-entered the competition after a 23-year absence.

This time round it will be a more mature Team HRC and a more developed bike that head off to the world‰Ûªs toughest race ‰ÛÒ a team far better prepared after gaining the experience, knowledge and mileage necessary to take up the great challenge.

Paulo Goncalves (Portugal, 36), had a great end to last year‰Ûªs edition, finishing runner-up after having been in the fray for the overall top spot. The Honda stalwart is determined to ascend one step on the final podium in 2016.

Last year, Joan Barreda (Spain, 32) was leading the race until the fateful stage in the Uyuni Salt Flats, where the race‰Ûªs fastest rider saw his winning aspirations evaporate. This year the Spaniard will put his leadership qualities, pace and navigational dexterity on display once more in a bid to be top of the leaderboard when the rally winds up in Rosario.

The remaining Team HRC riders are all making their maiden Dakar outings. Michael Metge (France, 36) is an all-round rider, skilled mechanic and a fine navigator. Paolo Ceci (Italy, 40) also knows the bike well. The veteran‰Ûªs contribution could be a key component for the team to achieve their goal this time around. Last but by no means least, a mention should go to Ricky Brabec (United States, 24), making his Dakar debut. Ricky dominated the entire desert season in 2014 and represented Team HRC earlier this year in Abu Dhabi, finishing fifth overall.

Team HRC and Honda South America have worked very closely since the former returned to the Dakar, and this year the Honda South America Rally Team has four factory bikes for the best South American riders. For the 2016 edition of the Dakar, these will be Javier Pizzolito and Kevin Benavides, representing Argentina, and Jean Azevedo and Adrien Metge from Honda Brazil.

The 2016 Dakar Rally starts and finishes in Argentina, although the warmth and colour of Bolivia and its people will once again host part of the race. Buenos Aires, the Argentinean capital, stages the race start on the January 3rd 2016.

The next thirteen days and 8500 kilometres will be an endless trail of tracks, dunes, mountains and rivers. Temperatures will range from 4 to 45 degrees Celsius. Anyone lucky enough to survive all of this will be rewarded with the sight of the finishing line in Rosario, Argentina‰Ûªs third biggest city.