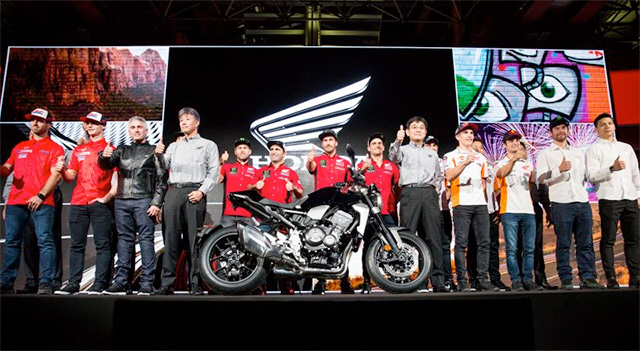 On the eve of the annual EICMA Motorcycle Exhibition in Milan, Italy, Team HRC announced its rider line-up for the 2018 FIM Motocross World Championship, MXGP, as part of its traditional factory motorsport announcement.

Tim Gajser, 2016 MXGP World Champion, remains with Team HRC aboard the #243 Honda CRF450RW, and is joined in the MXGP category by Brian Bogers as the 21-year-old Dutchman joins the factory outfit from the HSF Motorsport team.

‰ÛÏIt‰Ûªs great to stay with HRC into 2018 for another ‰ÛÒ we‰Ûªve already been a long time on this journey together and I'm so happy to continue," Gajser said. "For 2018 I have new teammates which is something new to me ‰ÛÒ we are all young guys in the team and I think that‰Ûªs going to be good as we‰Ûªre all hungry for the challenge together. I‰Ûªm really excited for the year ahead; we‰Ûªre fit and ready to go again. It‰Ûªs a pleasure too to be at EICMA with the rest of the family ‰ÛÒ the MotoGP guys, Dakar and the Trial team. It‰Ûªs a really strong family to be part of!‰Û