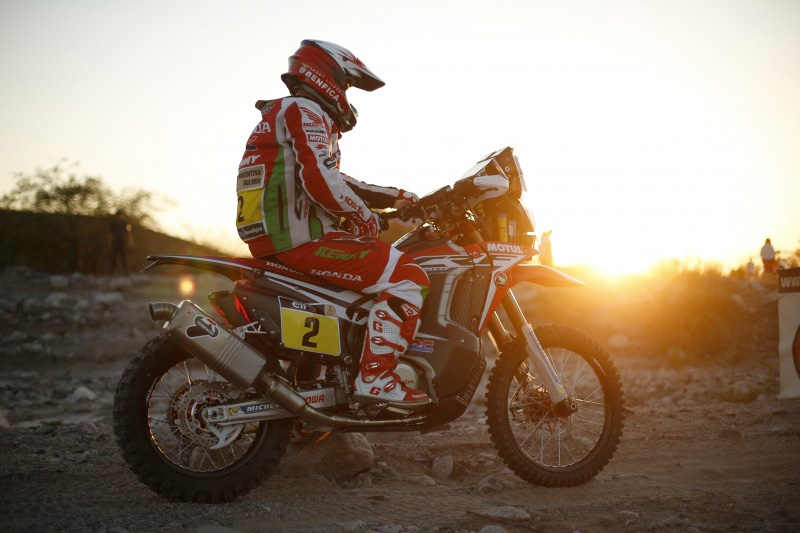 Team HRC Honda and Paulo Goncalves are not about to give up on the 2016 Dakar Rally despite the former race leader of this years event being towed into the end of Stage 9 overnight.

Heading into the stage just minutes behind Australian race leader Toby Price, Goncalves ran into trouble when his radiator was penetraed after he colided with a bush.

With the cooling leaking from his machine, the bike eventually stopped out on course, with Goncalves being resucued from the 45 degree heat by team mate Paolo Ceci towed him straight into the marathon bivouac after the stage was cancelled at check point 2 due to the severe weather conditions.

The second marathon stage of the 2016 Rally Dakar showed just how tough the extreme conditions of the race are. Race organizers today decided to cut short the timed special halfway through.

Neither , nor Team HRC, wish to throw the towel in this Dakar 2016 and team-mates Michael Metge, Ricky Brabec and Paolo Ceci will do everything in their power to help the Portuguese rider salvage the best possible result from what is left of the race, with the three riders doing what they can to get Goncalves bike back up and running, with no mechanical help allowed from the team due to the Marathon stage rules.

"Today we have experienced one of the most incredibly hard days in the Dakar, maybe the hardest in the history of the Dakar until now, with a situation of extreme temperatures that have affected the normal development of the stage." Team HRC Team Manager Wolfgang Fischer commented.

"Paulo, fortunately, continues to be in the race in spite of a serious setback before the refuelling. A log pierced the radiator and the coolant leaked out. With the heat that there was, he arrived extremely overheated at refuelling and wouldn‰Ûªt have been able to carry on if it hadn‰Ûªt been for the race authorities‰Ûª decision to stop the stage at CP2, which means Paulo keeps his possibilities of continuing open.

"He was helped by his team-mate Paolo Ceci to make it back to the bivouac and there they will attempt to repair the bike so that he can start tomorrow and continue his adventure in this Dakar.

"Tomorrow there will be a new starting system although the organization hasn‰Ûªt yet given us the information about what the order will be, but we believe that there will be various cars out ahead of the bikes. It will be especially tough for those who start out from behind.