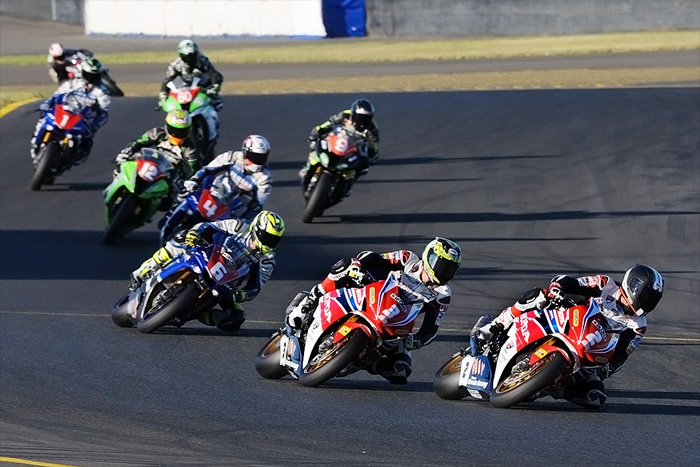 The Honda CBR1000RR SP was strong from the beginning of the weekend as Troy Herfoss topped the time sheets in both practice sessions today. He recorded his fastest lap time in the second practice session, a 1:30.589 sec.

Jamie Stauffer posted the 5th fastest time in both practice sessions, making good use of the track time to fine tune the CBR1000RR SP.

The Hondas looked strong in qualifying and at the session‰Ûªs end Herfoss recorded the 3rd fastest lap time with a 1:30.812 sec ahead of Stauffer with a lap time of 1:30.936 sec, placing them in P3 and P4 on the grid for the AFX-Superbike Championship decider later in the day.

The final race in the 2015 AFX-Superbike championship was Honda‰Ûªs from the start. Both CBR1000RR SPs got off the start line well, but it was Stauffer who lead the field after the first lap, ahead of Herfoss hot on his tail.

It wasn‰Ûªt long until Herfoss took the lead with the title clearly in his sights. Herfoss claimed the fastest lap of the race, a 1:30.851 sec ahead of team mate Stauffer with a lap time of 1:31.135 sec and a gap to 3rd place of more than 2.5 seconds at the chequered flag.

It was a convincing and thrilling win for Team Honda Racing and places Herfoss in Pole position on the grid for tomorrow‰Ûªs Swann Insurance Superbike Championship decider.

‰ÛÏI‰Ûªm ecstatic because it is the first time I‰Ûªve been able to dominate a race quite like that." Herfoss said. "Every race so far has been less than a second gap, but today from the moment we rolled out of the pit garage I knew we had a great bike and it made the race so much easier.

"I really want to thank Shaun Clarke for his complete dedication. He has done a fantastic job all year.

"I am ecstatic to take the FX-Superbike Championship title and pole position for tomorrow‰Ûªs Swann Series races. Another big battle tomorrow and the Honda is up to the challenge.‰Û