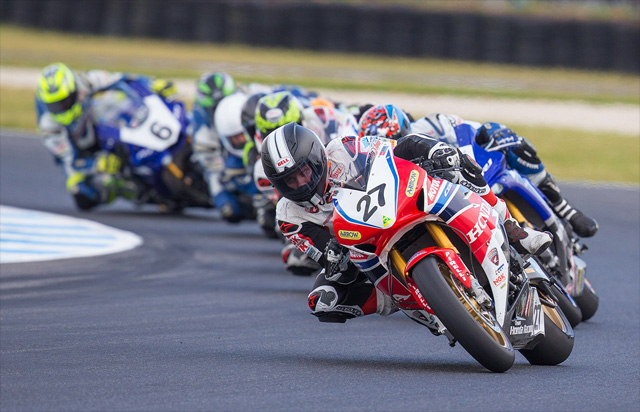 It is day two of the Pramac Australian MotoGP event at Phillip Island and Team Honda Racing leads the Phillip Island Championship heading into the final Superbike race tomorrow.

After a superb qualifying session yesterday it was #28 Troy Herfoss who took Pole position for all 3 Superbike races this weekend with a fastest lap time of 1:33.173 sec followed closely by team mate #27 Jamie Stauffer in P2, his fastest lap time a 1:33.231 sec.

Superbike Race 1 yesterday hinted at just how close the racing would be this weekend as the CBR1000RR SP riders of Team Honda Racing battled it out for the lead throughout the race. Ultimately it was Stauffer who claimed victory in Race 1 with a fastest lap time of 1:33.749 sec. Herfoss had to settle for 6th place in Race 1 after a fierce battle at the front of the field.

Under clear skies this morning, Superbike Race 2 saw a similarly close field with just a tenth of a second separating the top 4 riders across the finish line.

Stauffer finished Race 2 in 4th place and recorded the fastest lap of the race, a 1:33.084 sec. Herfoss finished in 5th place and still leads the Phillip Island Championship heading into tomorrow‰Ûªs final race.

Herfoss is eager to finish strongly tomorrow, saying ‰ÛÏI am happy to still be leading the championship with one race to go, but the racing is extremely close this weekend and I haven‰Ûªt quite been able to put it on the podium as yet. We will make some small changes to the set-up this afternoon and come out fighting in the morning.‰Û