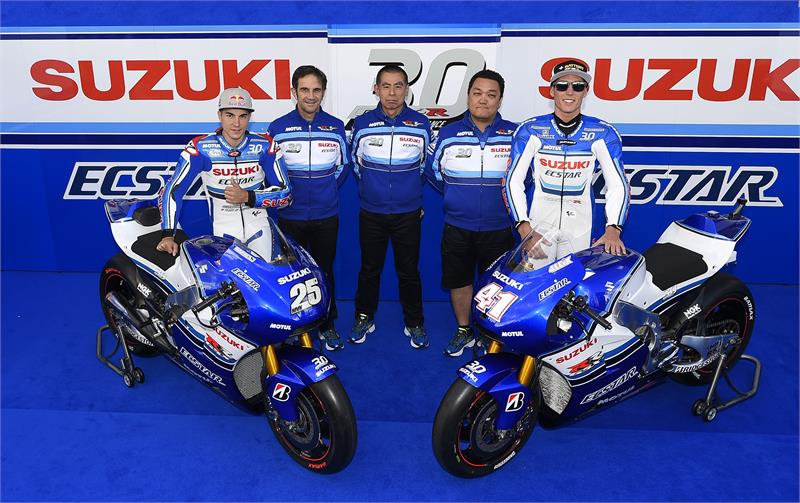 Team SUZUKI ECSTAR and Suzuki Motor Corporation are all set to celebrate the 30th Anniversary of the Suzuki GSX-R machine this weekend at the Sachsenring MotoGP‰ã¢ World Championship race in Germany.

Riders Aleix EspargarÌ_ and Maverick ViÌ±ales will race with a special livery on their GSX-RR machines, matching rider leathers and new team clothing, both this weekend and also at the GP of Indianapolis. The graphics are based-on the iconic blue and white colour scheme from the 80s that was also debuted on the race track by Kevin Schwantz.

Launched in 1985, the Suzuki GSX-R has become an iconic model-range in the road motorcycling market, as well as on the racetrack, introducing version-after-version, technological advancements and styling innovations.

‰ÛÏWhen we started developing the MotoGP‰ã¢ machine we clearly had in mind that it would be named the GSX-RR, therefore keeping a very strong connection with the GSX-R." Team SUZUKI ECSTAR MotoGP Project Leader Satoru Terada explained. "This name at Suzuki means a lot, because it has a very strong heritage both in road machines and in racing machines.

"This direct connection between the race version and the road version is something Suzuki has always believed in and we as Team SUZUKI ECSTAR strongly wanted to respect this view. GSX-R and RR are real sisters, not only because of their design, but also because the technical innovations that we develop and test in racing have a direct application also on series production models.

"This is our way to stay in touch with our fans, may they be supporting our riders in a MotoGP‰ã¢ Grand Prix, or riding their GSX-R machines on the roads of the world.‰Û