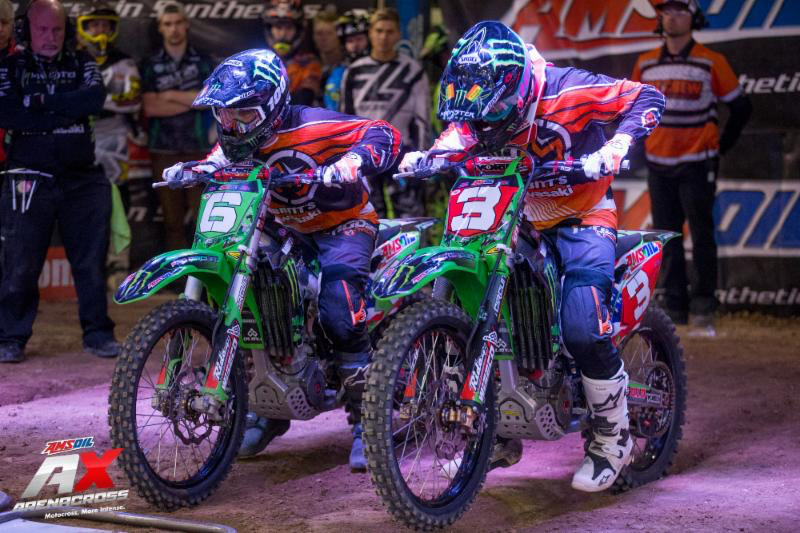 The battle to crown the first ever recipient of the Ricky Carmichael Cup culminates with AMSOIL Arenacross' anticipated return to Las Vegas for the final round of the Race to the Championship.

Orleans Arena will become the newest home of the AMSOIL Arenacross Finals this Friday night, May 6, starting at 8 p.m. Three riders, the Team Babbitt's/Monster Energy/AMSOIL Kawasaki trio of Gavin Faith, Chris Blose, and Jacob Hayes, remain mathematically eligible heading into the final showdown of the 2016 season.

The AMSOIL Arenacross Finals on Friday night will kick off a thrilling championship weekend in Las Vegas that continues with the Monster Energy AMA Supercross, an FIM World Championship Finals on Saturday, May 7, from Sam Boyd Stadium, and concludes on Sunday, May 8, with the AMSOIL Amateur National Arenacross Championships from Orleans Arena.

Two weekends ago at the penultimate round of the Race to the Championship in Nampa, Idaho, Faith swept the overall win across two nights of action, which allowed him to break a tie atop the point standings with Blose and subsequently open up an eight-point lead over his teammate. Faith's best outing of the Race to the Championship came at an opportune time, creating a little separation between he and Blose. A runner-up finish by Hayes on the most recent night of action kept him in the championship picture and ensures that one of the three Team Babbitt's riders will end the season holding the Ricky Carmichael Cup.

Faith, Blose and Hayes have been the most consistent riders in the Race to the Championship, with Faith and Blose securing all but one overall victory across six races. Blose surged into the championship lead after sweeping both nights of the opening round in Ontario, California, and was able to extend his lead the following weekend in Salinas, California, finishing second to overall winner and TiLUBE/TUF Racing Honda rider Ben Lamay. However, for the past two rounds Faith has turned the momentum into his favor, amassing a three-race winning streak heading into Las Vegas.

Faith went on a similar run heading into the Race to the Championship, solidifying his top seed in the playoff. Since its inception for the 2013 season, the top seed entering the Race to the Championship has ultimately won the title and Faith is poised to continue that tradition with another strong outing. He has finished on the overall podium in all six races thus far.

If not for a crash in Tacoma, Washington, that resulted in a fifth-place finish Blose would be in the same elite company as Faith. Instead, the veteran will head to Orleans Arena in search of his third overall victory of the Race to the Championship. Blose entered the playoff as its fourth seed, but quickly erased his deficit to assume control of the points after his impressive outing in Ontario. Given the memorable drama of last season's Las Vegas finale, anything can happen when the championship is on the line so the slim eight-point deficit leaves Blose well within reach of the title.

A rider familiar with the position his teammates currently find themselves is Hayes. He entered last season's race in Las Vegas with the championship in reach, but ultimately finished runner-up to eventual champion Kyle Regal following a wild final Main Event. Fresh off his first Main Event win of the Race to the Championship in Nampa, Hayes' 26-point deficit to Faith means he enters the finale with nothing to lose. His role in this three-rider showdown amongst teammates is arguably the most intriguing.

After sweeping the overall podium at three different races this season, Team Babbitt's is now poised to finish 1-2-3 in the final AMSOIL Arenacross standings, which would bring a fitting conclusion to a truly impressive season by the Denny Bartz-led effort.

The Arenacross Lites Class will feature a shootout between the Eastern and Western Regions. After both regions have their final Main Events of the season, they'll converge in one final race to determine which Lites rider stands amongst the rest. While the Eastern Regional Championship has already been decided with Daniel Herrlein emerging as champion, the Western Regional title is still up for grabs. TZR/Woodstock KTM's Cody VanBuskirk currently sits in control of the championship, with an eight-point lead over Team DirtBike Mike/KTM Sports Center of Little Rock KTM's Ben Nelko. They are the only riders that remain mathematically eligible for the title and as the two most successful riders in the Western Region, it should result in a compelling finish.