Saturday night in Oberhausen was rocked to its core when NIGHT of the JUMPs stormed the KÌ¦nig-Pilsener-ARENA with a world premiere.

For the first time, the world‰Ûªs longest running Freestyle Motocross sports series hosted a Freestyle of Nations competition. Three nations competed against each other in the World Team Challenge, collecting points in the MAXXIS Best Whip, Synchro, Rockwell Best Trick and Freestyle Competitions.

After the first IFMXF World Cup in 2002, the NIGHT of the JUMPs celebrated a grandiose return to Oberhausen. The comeback featured the World Premiere of the Team Championship, with some of the best action sports athletes from around the world flown in to compete. Team Australia featured Pat Bowden (Brisbane) and Ryan Brown (Melbourne) but was completed with the Chilean rider, Javier Villegas. Team Czech Republic was composed of Libor Podmol (FMX World Champion, 2010), Martin Koren and Matej Cesak. 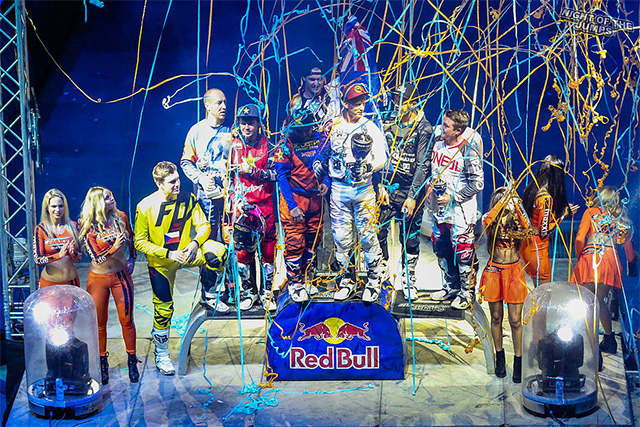 In Maxxis Best Whip, the whipmaster Pat Bowden from Australia was able to take full points for his team. The jump-off was against Luc Ackermann and Matej Cesak, who both fired out unreal whips, but the Australian had them both covered.

Team Germany was able to fight back in the synchro contest. Luc and Hannes Ackermann received the loudest cheers on the richter scale from the home town German crowd.

In the Rockwell Best Trick contest, each nation sent out their best riders. Libor Podmol represented the Czech Republic with a huge Cliffhanger Backflip to No Hand Lander, while Pat Bowden brought one of the most technical tricks in the sport of FMX, the Rock Solid Backflip. But this wouldn‰Ûªt be enough for the victory over Luc Ackermann who unleashed with the best extended Surfer Tsunami Backflip of his career.

The overall decision came down to the Freestyle Runs. Here, Team Australia/Chile delivered the best runs. Villegas stunned everyone with tricks like the Rowedova and Lazyboy Flip, Ryan Brown had the biggest Ruler Flip of the night and also his signature Switchblade flip, while Pat Bowden showed his Nac 360, Rock Solid Flip and Hart Flip.

Team Germany‰Ûªs chances started well, with Christian Kleiner piecing together an impressive run for his first ever ride at NIGHT of the JUMPs. Unfortunately, due to a possible mechanical issue on his last trick, he crashed against the wall and had to go to hospital. The decimated German team managed to continue and seal second place in front of a very solid and composed team Czech Republic who were always so close to taking the win. In the end, it was Pat Bowden, Javier Villegas and Ryan Brown who would win the first Team Challenge of the Freestyle of Nations. Other competitions will follow next year as part of the World Tour.

The NIGHT of the JUMPs World Tour 2017 has now come to an end. January 27th, 2018 will see the new season kick-off with the NIGHT of the JUMPs World Championship in Basel‰Ûªs St. Jakobshalle. German fans won‰Ûªt have to wait long until they get another dose of FMX when the World Championships will return to Berlin on the 16th and 17th of February, 2018 in the Mercedes-Benz Arena.