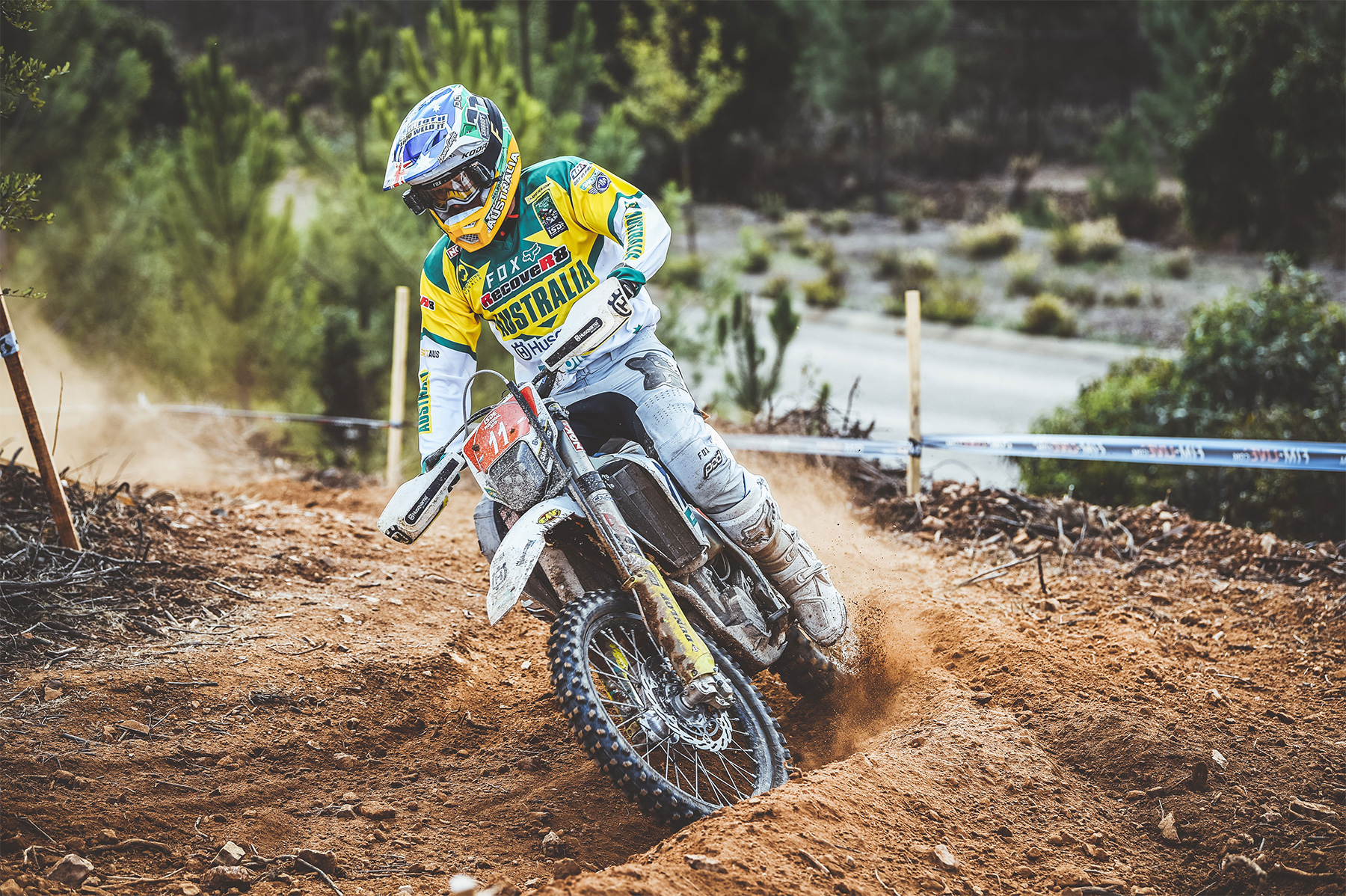 Taking control of proceedings, the defending champions are out to an early lead in the FIM World Trophy class, while also topping the FIM Junior World Trophy category.


After much anticipation, this year‰Ûªs FIM ISDE got underway in Portimao. Overnight rain dampened conditions for competitors during the opening lap of two, but from the off racing was hot and heavy as the five hundred plus competitors from twenty six nations jostled for position. 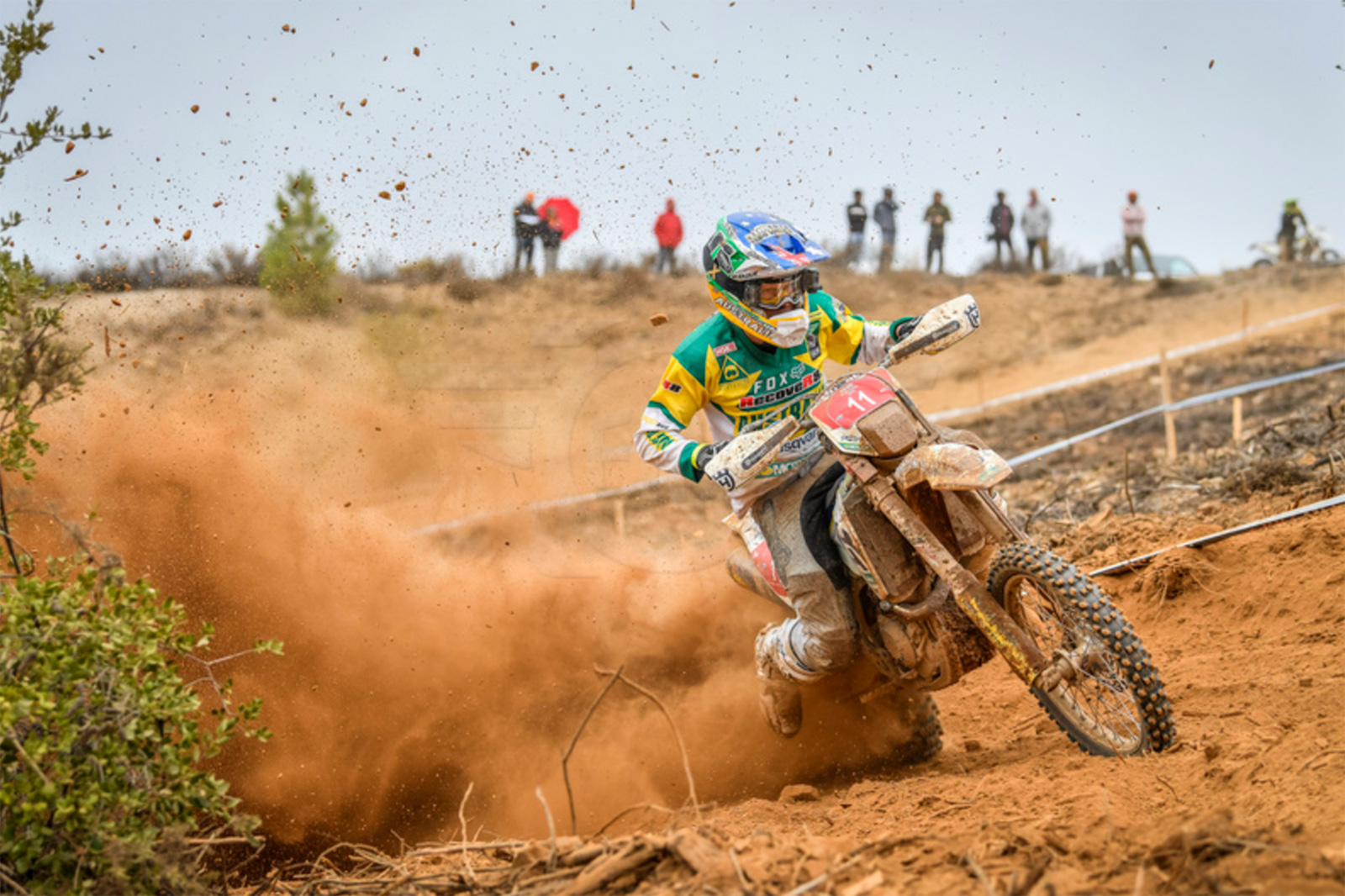 Matt Phillips. Photo: Dario Agrati
Determined to put Team Australia out front, Daniel Sanders was quick off the mark, setting the fastest time on the opening special test. But with United States‰Ûª Ryan Sipes and Spain‰Ûªs Josep Garcia in close contention and the top-ten separated by just fifteen seconds, it was all to play for.

Continuing to position himself at the sharp end of the results, Sanders led his RecoveR8 backed Australia teammates to victory on day one in Portugal. However, with United States ending the day only nineteen seconds behind, their lead is relatively slender at this early stage in the race.

I wanted to start strong. There‰Ûªs a lot of big names here this year and I wanted to put myself up there right away. Honestly, I didn‰Ûªt expect to lead by so much, but it means I‰Ûªm in a good place and I will look to build on that while helping to grow our FIM World Trophy lead.

Mirroring the finishing order of the 2018 FIM ISDE, Italy slot into third, albeit already over two minutes behind the leading nations. Despite losing a rider early on, Great Britain battled hard on the opening day of racing. Hampered by starting at the rear of the category and the untimely exit of Freeman, they still placed fourth. With an improved starting position for day two, they will look to build on that.

So too will Finland. Also hampered by a late start, the Finnish team ended their day fifteen seconds behind Great Britain in fifth, while Spain - boosted by Garcia‰Ûªs performance - complete the top six. Host nation Portugal lie tenth after the opening day of competition. 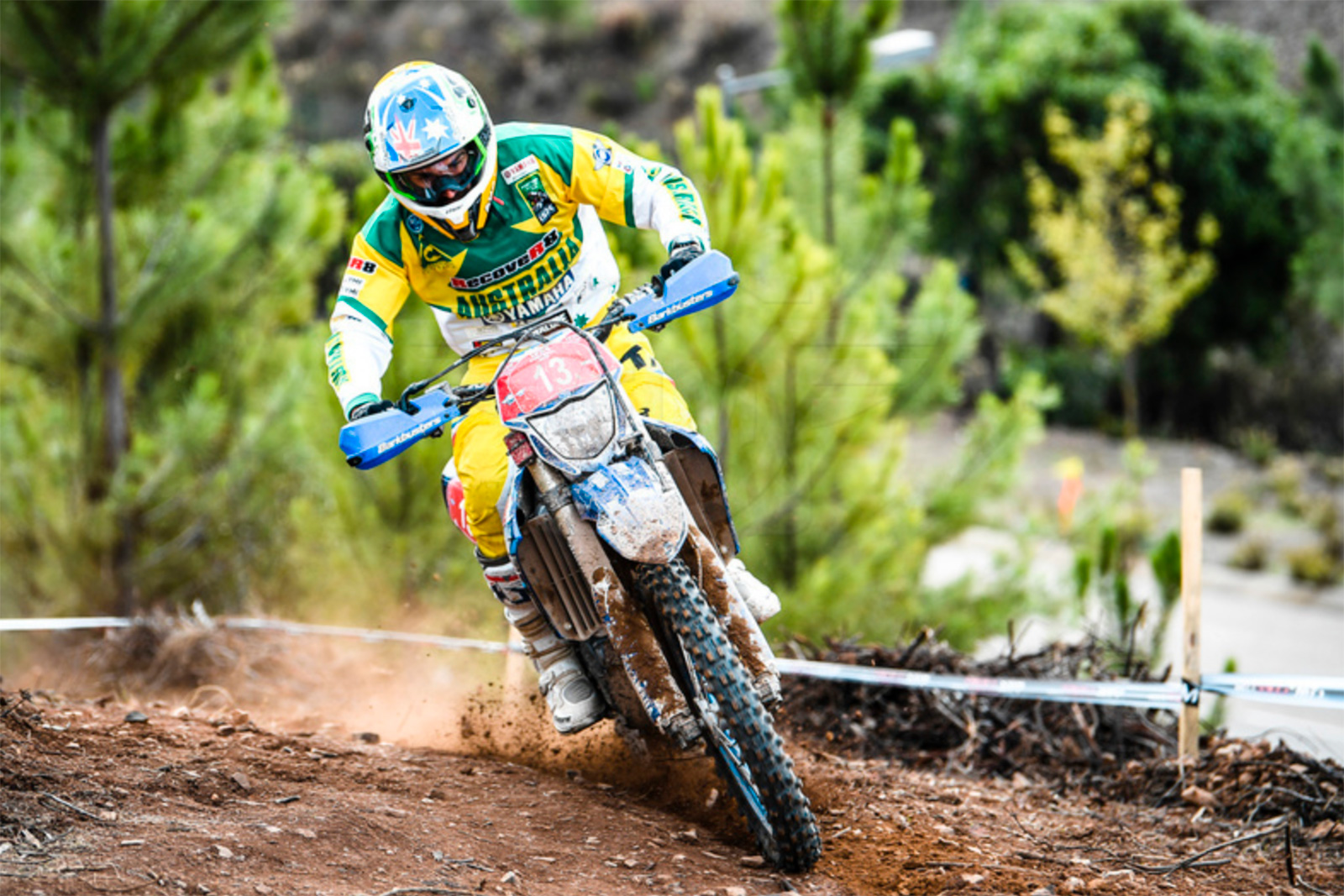 Luke Styke finished fifth in E1 and ninth overall on the opening day. Photo: Dario Agrati
In the FIM Junior World Trophy category, Team Australia enjoyed an impressively strong start to their FIM ISDE campaign. With two of their riders Fraser Higlett and Lyndon Snodgrass placing inside the top-ten overall, they hold a healthy one-minute and fourteen second lead over United States.

The opening day of racing in Portimao excitedly saw a major shakeup in the FIM Women‰Ûªs World Trophy competition with Germany holding a slender advantage over United States, while defending champions Team Australia were a surprise third.

Quick to make their presence felt in this year‰Ûªs race, Germany have shown they will be a force to be reckoned with. Strong rides from Anne Borcher and Maria Franke puts them five seconds ahead of closest rivals United States.

‰ÛÏI had a lot of fun out there and I think it showed in the results,‰Û 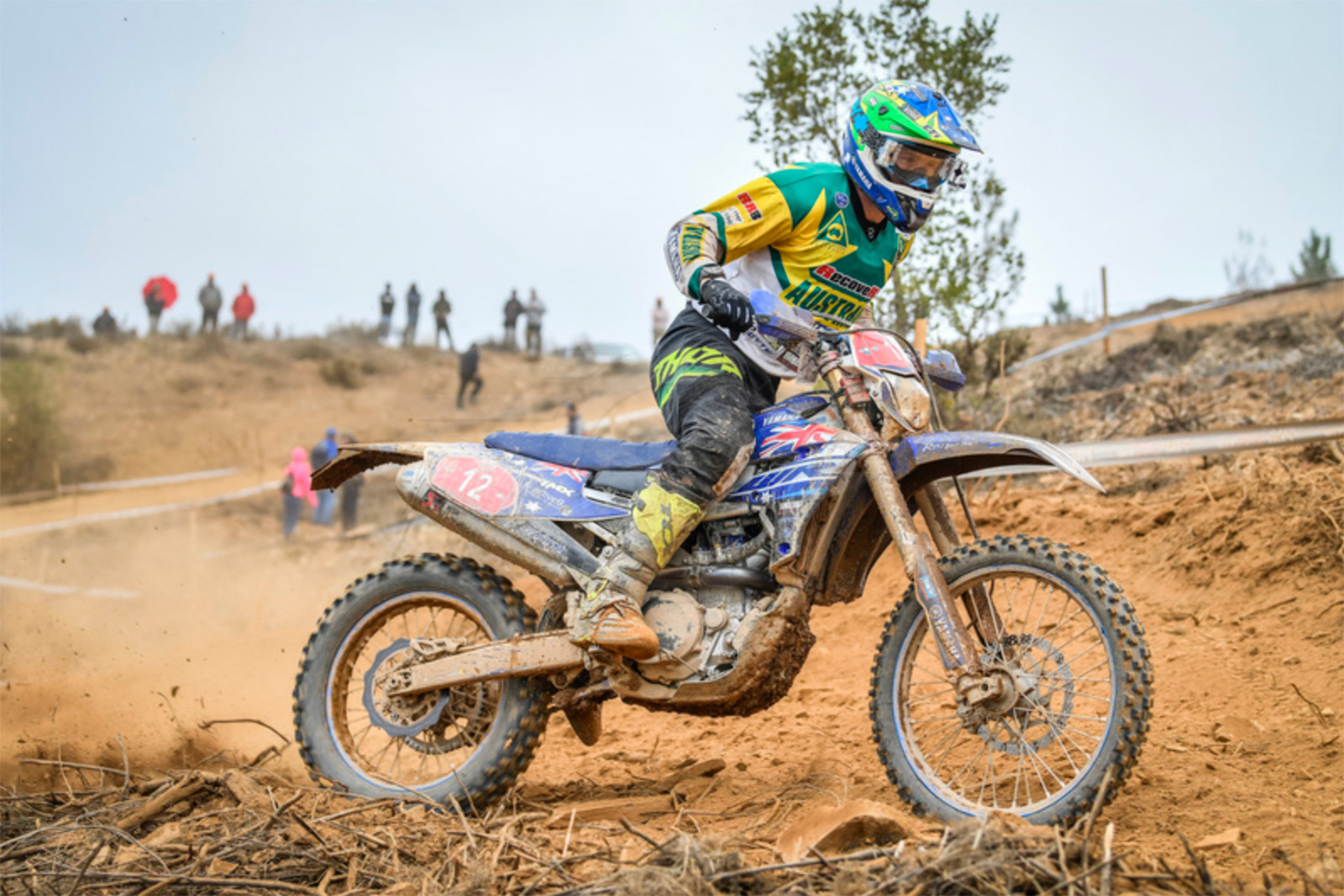 Josh Green finished sixteenth outright. Photo: Dario Agrati
One minute behind the leading duo in third, Australia will aim to regain some lost time on day two. Making their FIM ISDE debut, Great Britain have got off to a solid start in fourth, with Spain fifth. Sweden round out the top six on day one.

In the Enduro 1 category it is Josep Garcia who tops the standings on day one. Winning the final four special tests, Garcia holds a thirty-eight second lead over Ryan Sipes, who in turn holds an eighteen second advantage over Finland‰Ûªs Eero Remes in third. French Junior Espinasse impresses with fourth. The Sherco mounted rider is two seconds behind Remes and less than one second up on Australia‰Ûªs Luke Styke in fifth.

United States‰Ûª Taylor Robert is out to an early lead in the Enduro 2 class. However, with thirty-seven seconds separating the top six, the category is closely contested. Ending day one just six seconds behind his teammate, Kailub Russell will look to close that gap tomorrow. Consistently placing inside the top six, Higlett signs off on the opening day of competition in third, while Italy‰Ûªs Davide Guarneri - Honda is fourth. United States‰Ûª Junior rider Ben Kelley - KTM is fifth with Team Australia‰Ûªs Josh Green three seconds adrift in sixth.

Claiming the overall lead on day one, Sanders powers his way to a commanding lead in the Enduro 3 category. With a clean sweep of all seven special tests, the Husqvarna rider is one-minute and forty-seven seconds clear of Italy‰Ûªs Rudy Moroni in second. Moroni however has less breathing room with a determined Steward Baylor of United States twelve seconds behind. On a charge, Great Britain‰Ûªs Alex Snow and Danny McCanney are less than three seconds adrift of Baylor in fourth and fifth respectively. Germany‰Ûªs Angus Heidecke completes the top six in Enduro 3. 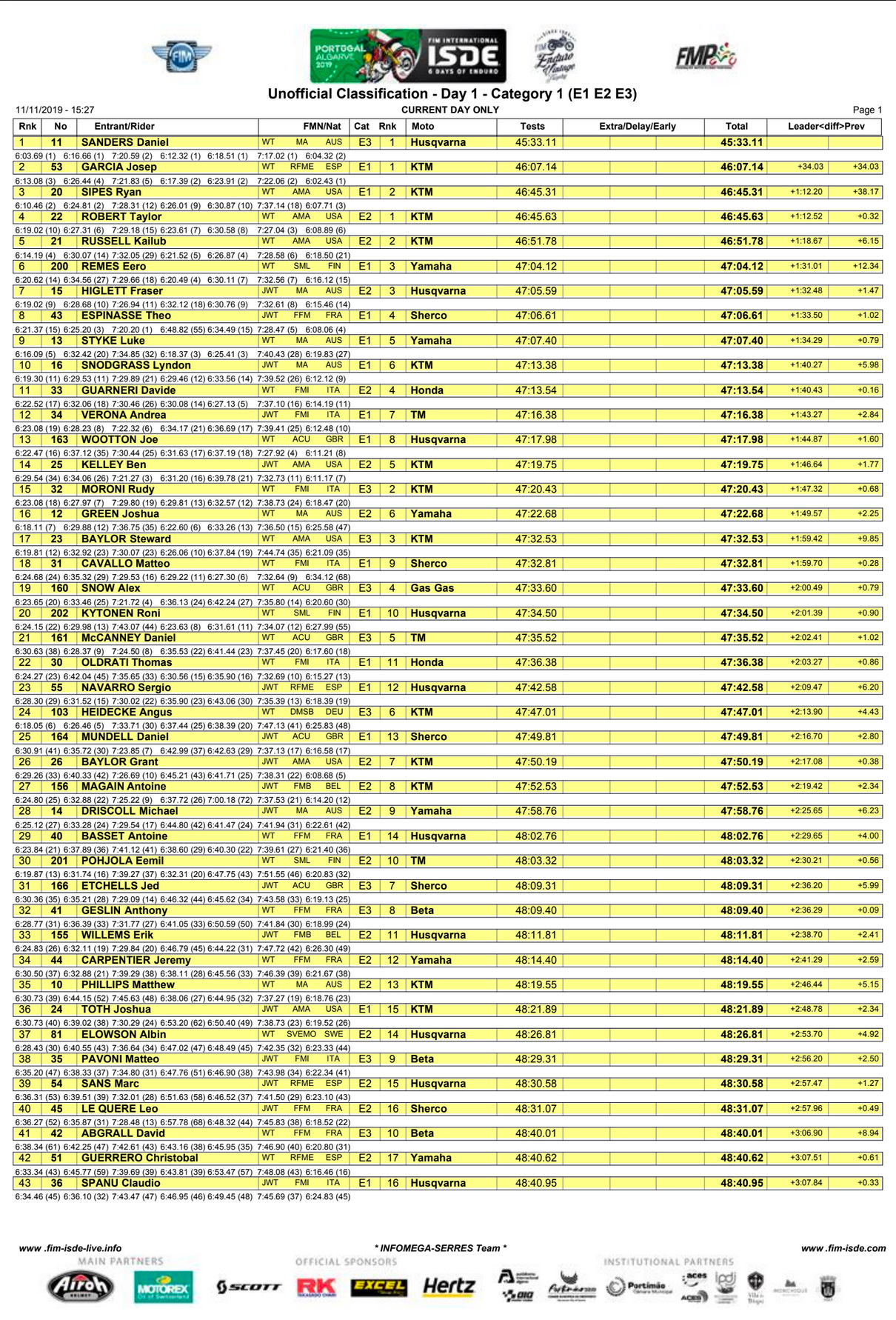