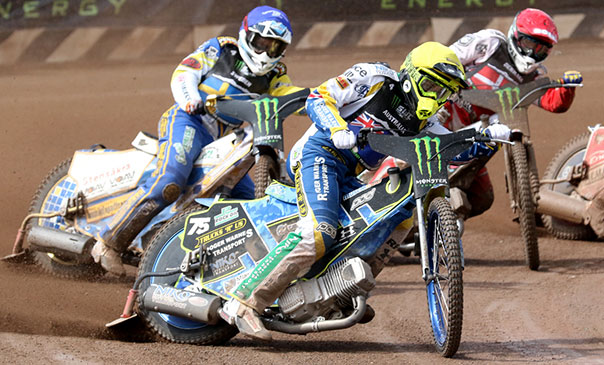 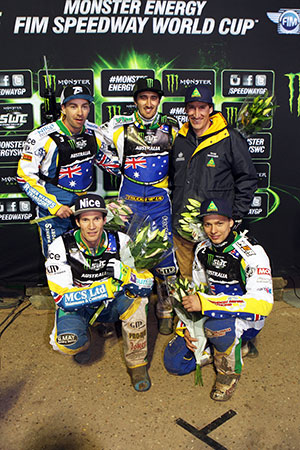 Team Photo Last years winning semi finalists L-R Troy Batchelor, Chris Holder, Team Manager Mark Lemon, Kneeling Jason Doyle and Nick Morris.
None other than Australian star, Darcy Ward, who will return to Europe in the coming weeks and will be present at this year‰Ûªs competition, assisted Team Manager, Mark Lemon with the squad selection for this year‰Ûªs campaign.

It‰Ûªs no surprise to see Grand Prix riders, Jason Doyle and Chris Holder take their place in this year‰Ûªs squad leaving Lemon and Ward with some big decisions to make on who will step up into the team in for this season‰Ûªs competition. A new rule for 2016 also means one under-21 rider must fill the reserve berth and Team Australia has no shortage of under-21s talent at their disposal.

All of the riders in the 2015 team, who finished overall fourth in last year‰Ûªs competition appear in this year‰Ûªs squad. The only debutant to appear is current Australia Under-21 Champion, Jack Holder.

‰Û÷Although the road to this year‰Ûªs competition hasn‰Ûªt been plain sailing, the ambition of the team and anyone who dons an Australian race suit remains the same and we‰Ûªll be looking to avoid the cut-throat race-off in the UK when we meet our competitors in the first round. It‰Ûªs great to have Darcy involved who keeps his eyes very much on the boys performances around the world and we‰Ûªre looking forward to him being part of Team Australia once again.

"With just under weeks remaining until the final team selection needs to be made, all eyes will be on the squad‰Ûªs European performances between now and then. This year‰Ûªs squad features experience as well as some exciting new generation riders and it‰Ûªs great to see them at a level where they are breaking onto the International team scene.‰Ûª

For anyone wishing to assist Team Australia‰Ûªs fundraising plight, donations can be made at https://www.gofundme.com/aesg4xhw.