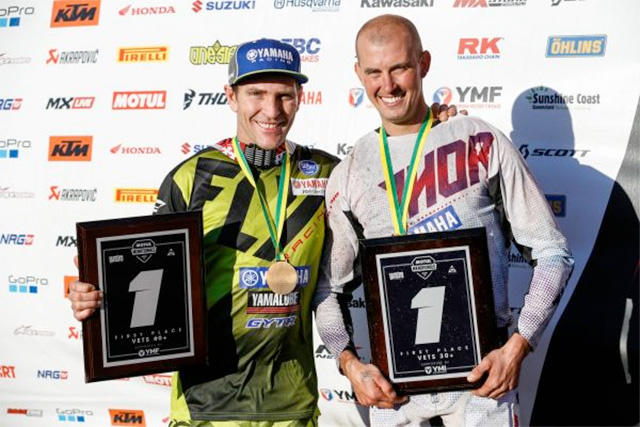 The Yamaha Motor Finance and Yamaha Motor Insurance Veterans categories raced for Australian Championships at Coolum today, with Chase Mosig and Cameron Taylor the first riders to be crowned Australia‰Ûªs newest champions at Round 10 of the Motul MX Nationals this weekend.

With healthy numbers in both the YMI 30 plus and YMF 40 plus classes, an incredible 30 competitors hit the track as a group for practice and qualifying this morning.

In the 30-39‰Ûªs category it was Mosig who topped the time sheets with a 1:46.773 lap time, from Steven Powell and Malcolm Cash. In the 40 plus category, Honda mounted Aaron Hunt was quickest (1:51.667) ahead of Mark Oberthur and Christian Horwood. 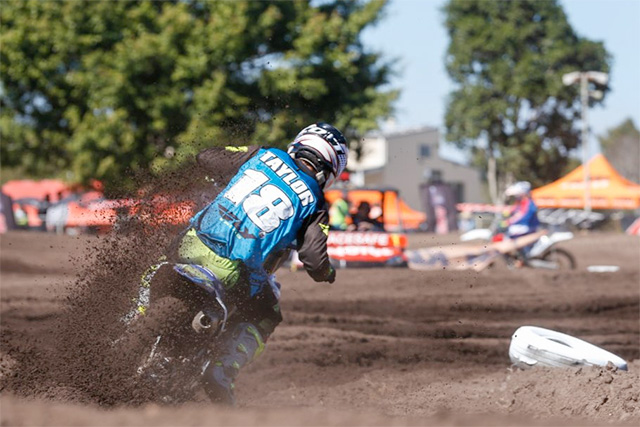 Yamaha Motor Finance 40 Plus winner Cameron Taylor. Photo:MXN Images
With two gate drops to separate the veteran‰Ûªs classes at Coolum, it was the YMI 30 plus riders who took off first, with Powell securing the holeshot and the race lead, and when gates dropped for a second time and the YMF 40 plus riders left the grid, it was Yamaha mounted Taylor who immediately moved in to the race lead.

With seven lap races for the most experienced riders at the MX Nationals this weekend, both of the veteran‰Ûªs classes wasted no time in getting comfortable on the Coolum circuit and battling hard for podium positions.

After three laps, Mosig had bypassed his competitors Powell and Malcom to move in to the 30 plus race lead, while Taylor continued to maintain control of the over 40s category ahead of Christian Horwood and Mark Oberthur.

Surprisingly at the five lap mark, over 30s leader Mosig put his machine down in the first turn, however the experienced rider was able to remount his bike with enough time not to relinquish his race lead.

By the time riders received the last lap board, the categories had well and truly blended together, providing race leaders Mosig and Taylor with the added challenge of navigating their way through lapped traffic. But when the chequered flag flew, it was the Yamaha pair who claimed victory.

In the YMI 30 plus class, Mosig took the race win from Honda mounted Cash, and Powell (Husqvarna), while Andrew Haack and Andrew Shacklock wrapped up the moto in fourth and fifth places respectively. In the YMF 40 plus category it was Taylor who took the win from Travis Regeling (Honda) and Yamaha moutned Oberthur, followed by Christian Horwood and Aaron Hunt. 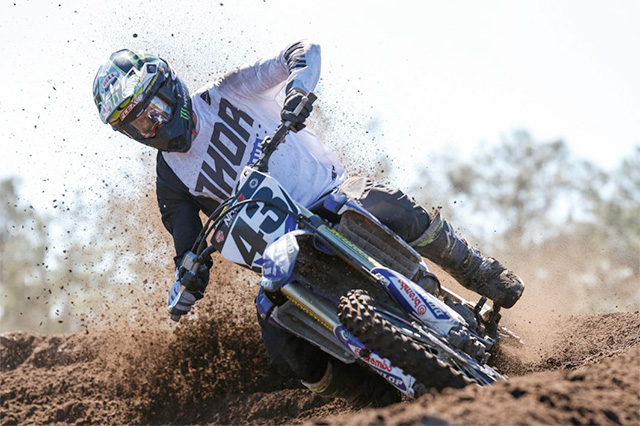 Yamaha Motor Insurance 30 Plus winner Chase Mosig
The YMF and YMI Veterans were the last riders to take to the track this afternoon, and as a result the oldest riders in the field were handed with the roughest and most difficult track of the day.

With two gate drops once again, the over 30s were the first to take off, and it was Mosig who this time took the holeshot. When the gate dropped for the second time for the over 40s class, it was once again Yamaha‰Ûªs Taylor who shot off into the race lead.

After only a lap, Mosig continued to lead from Cash and Powell in the over 30‰Ûªs, while Taylor remained in the top spot ahead of Horwood and Regeling in the 40 plus category.

With the track drying significantly in the later stages of today, the veterans had not only their competitors to contend with, but the dust too, and once again it was Mosig and Taylor who took to the conditions like true professionals, ticking off lap after lap in the lead of their respective classes.

As the final moto for the veterans began to reach it‰Ûªs later stages there had been little change to positions, and when the chequered flag flew for the last time, it was a repeat of moto one‰Ûªs results with both Mosig and Taylor claiming race victories.

Second place in race two for the YMI 30 plus category went to Cash, followed by Powell in third. Horwood secured second place in the over 40‰Ûªs class, while Regeling held on to finish his final moto in third.

With the results from both motos combined, it was Mosig who claimed his first Yamaha Motor Insurance 30 plus Veterans Australian Championship, second was awarded to Honda mounted Cash, while Victorian Powell completed the 30 plus podium.

In the YMF 40 plus category, Taylor‰Ûªs 1,1 race results saw him take the championship honors at Coolum, followed by Regeling and Horwood who completed the veterans class podium.

‰ÛÏI‰Ûªm feeling really good about today! This is pretty much my first race back since 2013,‰Û