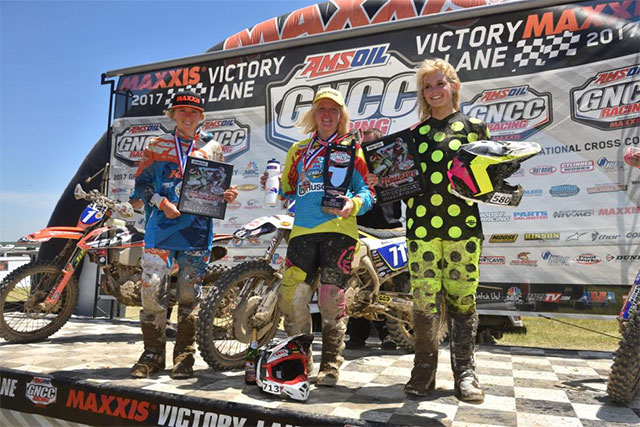 Australian Tayla Jones has once again topped the podium at the Dunlop Tomahawk GNCC this past weekend in Odessa, New York.

The Dunlop Tomahawk GNCC hosted an impressive 91 female competitors on both 2 and 4 wheels throughout the course of the weekend.

Jones's compatriot Mackenzie Tricker raced out to earn the WXC holeshot. Rocky Mountain ATV*MC/KR4/Husqvarna Team's Tayla Jones stayed on the gas and moved into the lead as they entered the woods, but crashed allowing for most of the class, including Trail Jester rider Tricker and Fly Racing/Maxxis/Seat Concepts/KTM's Becca Sheets, to get back around her.

As they approached timing and scoring for the first time, Sheets grabbed the lead with Tricker right behind her. StuxMX Graphix/Bell Powersports/Kenda Tires/Cosner Racing/Full Gas Fitness' Brooke Cosner ran in third, with Jones making her way back to fourth.

Mckenzie Tricker grabbed the holeshot, but Tayla Jones was on her back tyre. Credit: Ken Hill
The four leaders continued passing each other back-and-fourth, until they hit a bottle neck and spread out a little bit more. This put Jones back in the lead, with Cosner, Sheets and Tricker in tow. Sheets regained the second place position on the third lap and attempted to catch Jones, but by the time the two-hour race was over Jones was the first to see the checkered flag. Sheets crossed the line in second, and Cosner made her first podium appearance of the year in third. Tricker finished just off the podium in fourth, and Carolina KTM's Kendall LaFollette rounded out the top five.

"This weekend was tough both mentally and physically," explained Jones. "A couple of big crashes put me back a bit and the track conditions were very demanding. I am happy with how I rode though the last couple of laps and stoked to get win."

"On the last lap I just hit all the lappers, at all the wrong times and wasn't able to stay close enough to the finish," said Sheets. "I'm still happy with the way I rode and feeling more comfortable on the KTM each round."

"I had a great race, and I'm definitely happy with the day," reported Cosner. "I rode well, sticking up front and getting to the lead, but fell off a little at the end and blew all the oil out of my bike - so honestly it was a good day to even finish, let alone finish on the podium!" 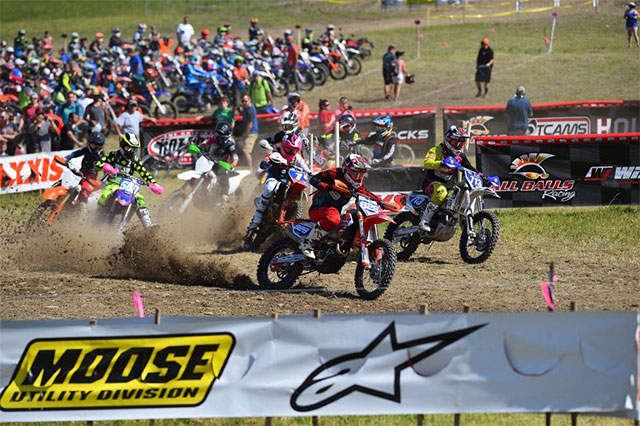 The racing action upfront was nothing short of exciting on Sunday, with the multiple lead changes between the top four ladies.
The 2017 AMSOIL Grand National Cross Country Series resumes in two weeks, June 24 and 25, with the popular AMSOIL Snowshoe GNCC in Snowshoe, West Virginia.