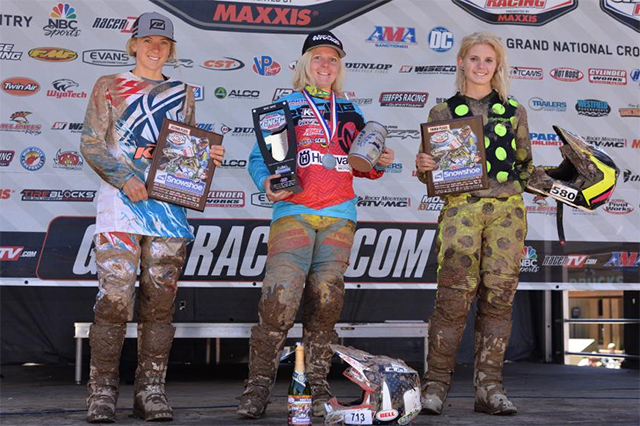 The Rocky Mountain ATV*MC/KR4/Husqvarna Team‰Ûªs rider continued where she left off from last round and jumped out to the early lead. Jones made a small bobble and lost the lead position on lap one. Fly Racing/Maxxis/Seat Concepts/KTM‰Ûªs Becca Sheets capitalised on Jones‰Ûª misfortune and took command of the lead.

Brooke Cosner remained close to Sheets and made the pass for first in Howard‰Ûªs Hole. From there, Cosner picked up her pace. Meanwhile, Jones was slowly catching back up to Sheets. Sheets and Jones were wheel-to-wheel as they approached a group of lapped riders. Cosner and Jones took the same line, while Sheets tried a different strategy. Unfortunately, Sheets‰Ûª line choice didn‰Ûªt play in her favor where she lost nearly two minutes on Cosner and Jones.

After leading the first three laps of the race, Cosner lost her back breaks on the last lap where she struggled to hold onto the lead. After riding smart after her crash, Jones found herself back in the lead and Cosner felt the pressure from Sheets who was on a mission to recover from the bottle neck. Sheets moved back into second just before the finish line.

Jones claimed her seventh victory of the season, while Sheets and Cosner finished second and third. ‰ÛÏSnowshoe was tough, but I am happy to be able to pull off another win in the crazy conditions,‰Û