Tayla Jones Is Back! 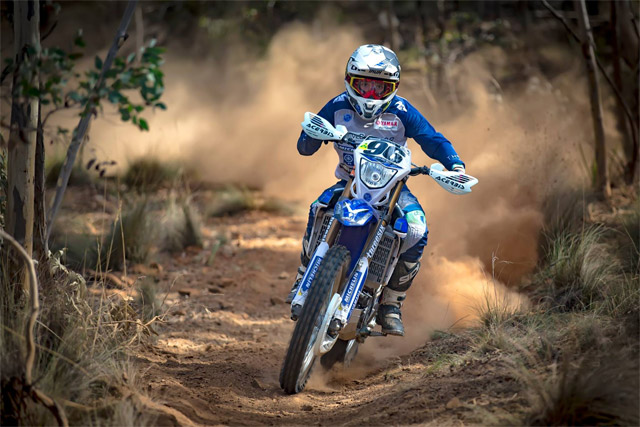 Yamaha mounted Tayla Jones has definitely had an eventful year this year with half her season being ruled out due to injury, but that hasn‰Ûªt stopped the 2015 Yamaha Australian Off-Road Women‰Ûªs Champion from standing on the sidelines and supporting her team.

However, this weekend will see Active8 Yamaha Yamalube Racing Team's Jones gear up yet again to battle in the final two rounds of the Yamaha Australian Off-Road Championship, competing in the Championship E1 Class.

Below Tayla Talks about her season so far and what her plans are looking forward to 2017, hear what she has to say below.

Talk us through your injury this year, and when you jumped back on the bike?

Jones: At the start of this year in May I broke my Fibula right at the ankle, in America. I was competing in a GCC, and managed to put myself out for ten weeks. I jumped back on the bike two and a half weeks ago now, and have been competing since in the Women‰Ûªs MX nationals race in Queensland. This weekend I will be competing again in the AORC. I just want to ride again! I have just been sitting on the sidelines watching everyone else race and have fun, and I can‰Ûªt wait to get back out there again. I just want to race.

This weekend is going to be a little bit different because you haven‰Ûªt ridden the bike in a while and you‰Ûªre not in championship contention. What are you hoping to achieve and what are you most looking forward to?

Jones: This weekend is going to be my first Cross Country race competing against the boys. This weekend I just want to battle my hardest and try to get myself in the highest position I possibly can. I am not going in to the rounds with any expectations. This is my first proper Off-Road race back so I just want to finish the races and come out with no injuries.

This year it saw a change as you jumped from the Women‰Ûªs Class in 2015 to battling in the E1 Class this year? What was the reason for the step up, and in that short time competing what did you enjoy most?

Jones: We decided to change to the Championship E1 Class this year, because last year I was winning everything in the Women‰Ûªs. We thought that the switch would mean more challenges and competition, and would make me ride harder if I raced against the boys. I like trying to beat the boys. My main aim this year in the class has been to be finishing in the top ten, and showing the guys that I can actually beat them and scare them (she joked).

You have been on the sidelines supporting your team throughout this season and it just shows how much of a team player you are; how much fun is it working with the Active8 Yamaha Yamalube Racing Team?

Jones: Working with Active8 Yamaha Yamalube Racing Team is awesome. We can joke around and have heaps of fun together. Being around the team all year has been great, and it has been good to be able to support Beau this year, because he has been competing solo that last however many weeks it has been since Josh and I were both out with injury. You get to still see how the team run, and how much we work together to get to every event and make sure that we continuously support each other.

Looking forward to next year and hopefully an injury free season, where are we going to see you competing, and apart from winning a championship what‰Ûªs your ultimate goal?

Jones: Next year is a secret‰Û_.

Next year is going to be a big step for me, I just want to have a good year and stay injury free. Hopefully at the end of it I can just ride my best and come out with a title where ever I am.