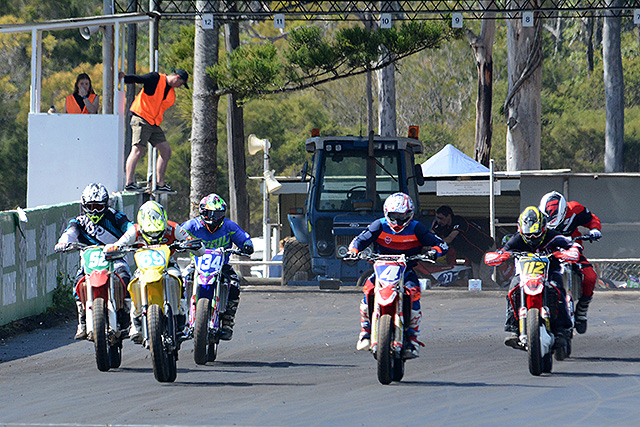 The 2017 Husqvarna Motorcycles Australian Junior Dirt Track Championships will be staged this weekend at the Old Bar track near Taree.

Almost 90 riders from the three Eastern States and over 140 bikes will descend on the Old Bar track to battle it out for the 11 championship classes, and three support classes.

Fans who attended the Troy Bayliss Classic meeting in January this year got a sample of the action that junior riders can turn on around the 500 metre hard packed oiled circuit with junior racing often matching the senior action.

It is unfair to look on these juniors as merely the stars of tomorrow, although the rich talent in the junior ranks at present gives cause for optimism that some world rated stars of the future could emerge from their ranks.

These riders are already very accomplished and polished performers and with championship honours up for grabs this weekend fans should be treated to plenty of high quality action.

A number of riders who will be in action this weekend have already sampled other forms of motorcycle competition including several who are already impressing on the road racing tracks.

Just six riders who won championship classes in last year‰Ûªs title meeting at Gunnedah will be competing at Old Bar, with several of them having now moved in to an older age bracket.

Around a dozen riders from the host club, Taree Motorcycle Club, will be competing and they will be looking to make the most of their home track advantage. That advantage could be significant given many of the visiting riders have had far less experience on oiled tracks, like Old Bar.

Last year local rider Hayden Nelson was the champion in a 7 to Under 9s class, but this year he will take on older riders.

Clubmates Kye Andrews and Will Bisley managed to get on the rostrum at the Australian Junior Track Championship meeting at Mildura in July this year, so they will be determined to get to the top of the victory dais on their home track.

Action from the 13 to Under 16s obviously attracts much attention, and not just because these are the next group of riders who will head in to senior competition. Brisbane rider Cyshan Weale was the standout at the recent Track Championship but he will face plenty of tough opposition this weekend.

Two other standouts from the Track Championship were Forbes rider Tom Drane and Sydney‰Ûªs Senna Agius who between them won five classes.

The Kurri Kurri Junior Club always provide a strong contingent of riders, this time headed by one of last year‰Ûªs winners in Carter Thompson and Cameron Dunker, who had a class win at the recent Australian Track Championship meeting.

Depending on how smoothly the program runs officials are looking to run three rounds of racing for all classes (69 races) on Saturday.

If racing gets to that point, it would only leave two rounds (28 races) of racing which includes the finals and the respective presentations on Sunday, allowing a finish by early afternoon to allow the visiting riders to head to their respective homes.