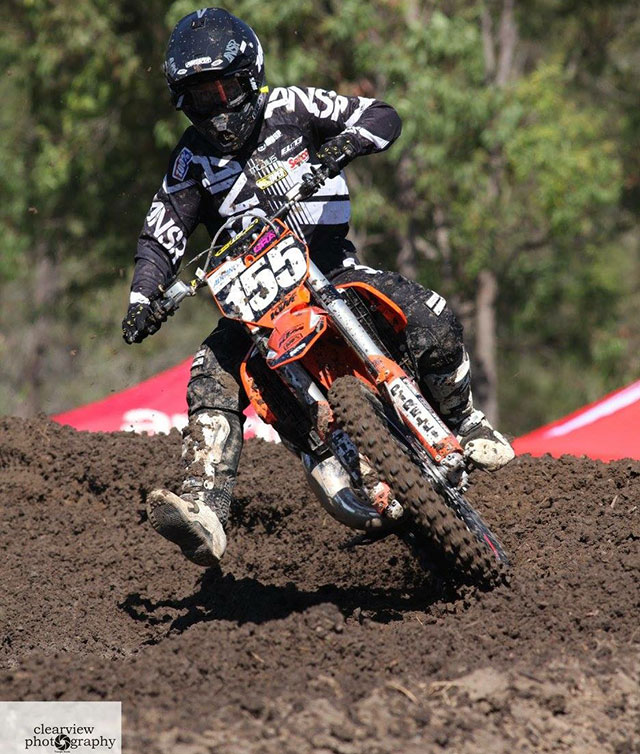 Tamara Gray rode to 2-1-1 finishes over the weekend to take the senior womens class overall at the second round of the Sunshine State Motocross Series at Tivoli Raceway.

Gray fended off a class that‰Ûªs slowly being stacked with the more powerful two-fifty two strokes aboard her mighty little KTM 150SX. In achieving this latest win, she has also now taken over the series lead for the class.

Tamara also contested the senior 125cc class which races back to back with the women's class, where she finished in 11th overall and holds the same position for the series. An pleasing result for the rider that celebrated her 33rd birthday earlier in the week.

Moto One Chelsea Carter and fellow KTM pilot Sarah Guthrie lead the charge, whilst Tamara was buried in the pack off the start. With a still very muddy track there were not very many opportunities to pass. Nonetheless Tamara capitalised on riders who struggled in the rutted conditions making passes where she could. Sarah experienced a malfunction with the rear brake on her 250SX that resulted in a DNF, moving Tamara up in to second. With only a few laps remaining, Tamara wasn‰Ûªt able to close the gap to the lead rider and settled for the second position.

Moto Two With a better start, amongst the top five Tamara rounded turn two to narrowly avoid Sarah Guthrie and another rider going down. Now finding herself in second behind Chelsea Carter, Tamara went to work in reeling her in. Within a couple of laps Tamara has made the pass around the outside of the bigger two-fifty two stroke and settled in to the lead unchallenged.

Moto Three Again with a top five start, Tamara rounded the second corner in third position with Chelsea Carter and Sarah Guthrie running up front. Tamara quickly caught up to the back of Sarah who was being held up a little by Chelsea. When the opportunity arose early in the race, Tamara made a move and passed both riders together. At this time Sarah was also able to get around Chelsea. Sarah then set off to chase Tamara, but the lapped traffic they encountered proved to be testing. Sarah went down while trying to make a pass on a lapped rider handing back her second position to Chelsea.

‰ÛÏTivoli was at its best today, rutted and tough and I loved it. My 150SX made the track easy work and plenty of fun for me to ride, it‰Ûªs all I need out there. My starts were lacking behind the bigger bikes but I was able to make some good passes out there and get some wins regardless.‰Û