Tahlia O‰ÛªHare Reflects On Her Championship Win At Chidlow 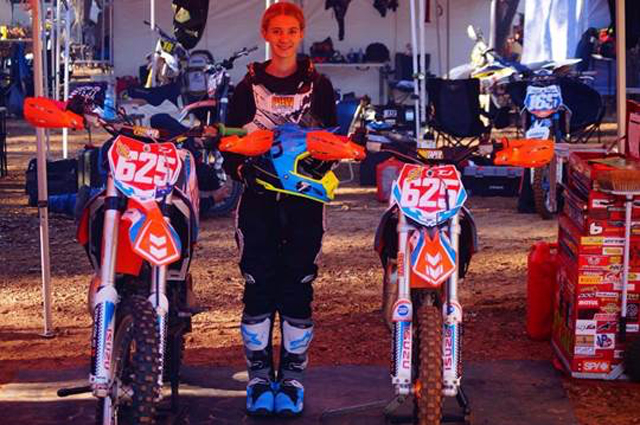 The annual two day Chidlow Challenge and inaugural junior girls state championship was held at the WAJMCC over the weekend of the 23rd and 24th of May with Tahlia O'Hare claiming the top step of the podium in the Girls 12-u16 class.

Six motos were contested over the two days to decide WA‰Ûªs first junior female champion with a group of hard working individuals coming together to make the event possible.

At the end of the two days of racing it O'Hare who came out on top after winning all three races on day one before backing up up her great result on day two, working her way through the field in each race to once again finish the day undefeated.

"Everything came together for me on day one, my starts were good and the bike was running well." O'Hare reflected. "The track held up nicely and I was able to get out in front early and ride a smooth consistent race, taking the three motos.

"Day two however proved a little harder. Emily and Megan decided to turn it up a notch and make me work a little harder. I had to really push my bike to try and get to the first corner before the bigger bikes of the other girls.

"It wasn‰Ûªt my day for Holeshots and it would take some well thought out passes to get past the other girls and into open space. It made for an exciting day and all the girls can be congratulated on their huge efforts to make this event a success.

"I was able to secure the day‰Ûªs three motos, taking all six heats and the 2015 championship.

"I‰Ûªd like to thank my dad, he takes me training rain, hail or sunshine, works on my bikes endlessly and works extra hard to earn the money to support me in my racing.

"Well done to all the riders over the weekend and well done to WAJMCC for an awesome event!" O'Hare concluded.