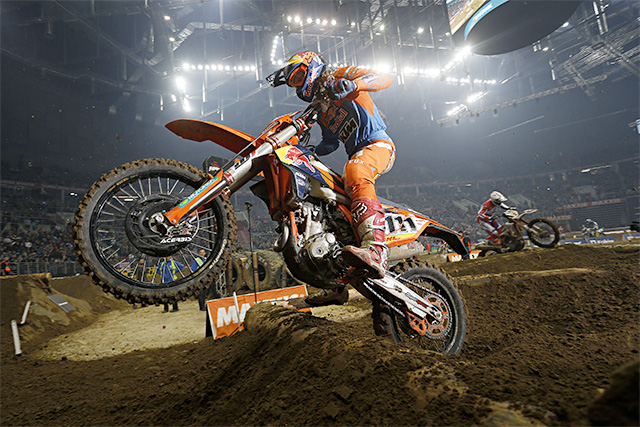 Red Bull KTM Factory Racing‰Ûªs Taddy Blazusiak has made a triumphant return to racing, claiming victory at the opening round of the FIM SuperEnduro World Championship in Poland.

The six-time world champion showed he‰Ûªs lost none of his speed despite a year‰Ûªs absence to claim the overall win in Krakow. Making it a memorable night for KTM, FMF KTM Factory Racing‰Ûªs Cody Webb followed him home for the runner-up overall result, while Billy Bolt rounded out the podium.

Announcing the SuperEnduro series opener as his return from retirement, Blazusiak hammered home a 2-2-2 scorecard in front of his home crowd to end the night as the overall winner.

With near-perfect starts, Blazusiak initially took the lead in each of the night‰Ûªs three races. Due to a lack of competitive time on the bike, Taddy slowed towards the end of the motos. But by holding on for second, his trio of runner-up positions were enough to secure the top step of the overall podium. Each race win went to Billy Bolt and Cody Webb who took two victories.

"It‰Ûªs an amazing feeling to come back and win, especially in my home town of Krakow," Blazusiak enthused. "To be honest, I played it smart tonight. After being away from racing for a whole year I knew the intensity of SuperEnduro was going to be tough ‰ÛÒ it‰Ûªs so difficult to prepare for, no matter how hard you train. I was suffering with arm-pump today but I think the secret is being comfortable with being uncomfortable.

"Before my retirement, I won everything that I wanted to win, so to be able to come back for another go gives me the chance to enjoy my racing. The next round in Riesa is the only other round I have ridden already, the rest will all be new so that makes a nice challenge. I came back to enjoy my racing and now I‰Ûªm going into the next round with the red plate ‰ÛÓ I couldn‰Ûªt be happier." 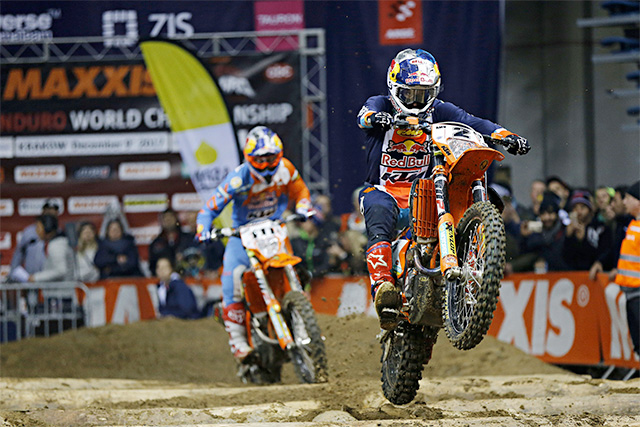 Despite two wins Cody Webb finished second overall. Photo: Future7 Media
Offering Blazusiak the closest challenge in Poland, Cody Webb joined him on the podium as runner-up. Claiming two race wins, Webb showed he was more than a match for Blazusiak. However, a bad race two, where he finsihed 5th, put paid to him wrestling the overall victory away from the Polish rider.

"It‰Ûªs awesome to be back racing in Europe again. I had some amazing battles out there tonight," Webb said. "The second race didn‰Ûªt go so well, the reversed start caught a lot of us out. I managed to claw my way back to fifth, but it wasn‰Ûªt quite enough. I rode great in the other two races, even after making a couple of mistakes. I had some great battles with Taddy, it‰Ûªs good to see him riding so well. I had the speed to reel him in, so that‰Ûªs nice to know. I‰Ûªm happy to be back and looking forward to fighting for the rest of the series.‰Û 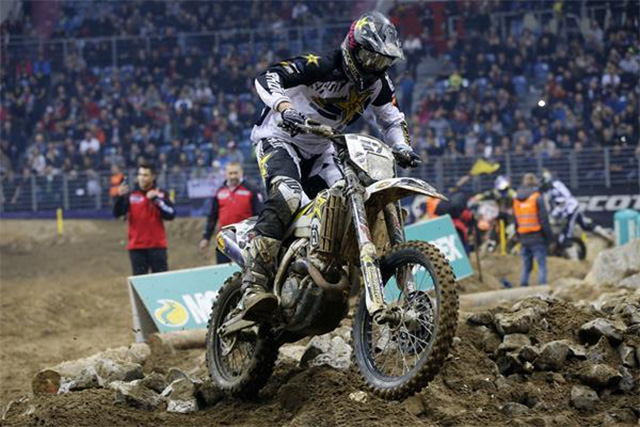 Billy Bolt landed on the podium on his indoor enduro debut. Photo: Future7 Media
Despite having never previously raced indoors, Billy Bolt immediately showed he had what it takes to challenge the world‰Ûªs best by ending the 2018 SuperEnduro World Championship opener on the third step of the podium.

‰ÛÏI‰Ûªm really happy with how it‰Ûªs gone today," Bolt reflected, "On the whole, a race win and finishing on the overall podium is really encouraging. In the first race I was suffering from arm pump a little and wasn‰Ûªt able to push like I wanted to. The second race was good but in the third I was tiring a little, but it wasn‰Ûªt too bad. You can never really prepare for the intensity of SuperEnduro, no matter how hard you try to push yourself in training. I‰Ûªm looking forward to round two, I just want to keep doing what I‰Ûªm doing, enjoy the racing and enjoy the experience. It‰Ûªs amazing to race in front of the fans like this, their cheering really motivates you to give that little bit extra.‰Û