Tactical Navarro holds off attacks to take his maiden win 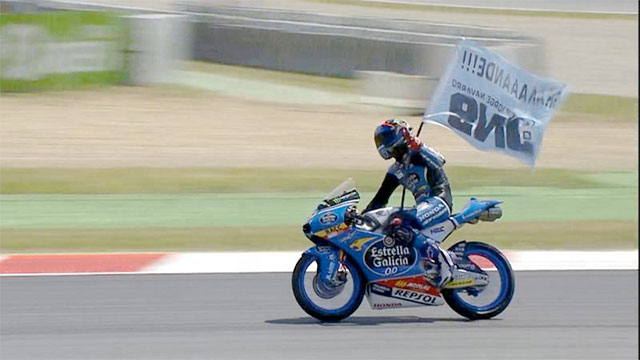 Jorge Navarro took his maiden Moto3 victory at the Catalan GP ahead of championship leader Brad Binder and Enea Bastianini.

Sun continued to grace the Gran Premi Monster Energy de Catalunya as the Moto3 World Championship lined up on the grid, the first race to be run on the revised layout.

Championship leader Brad Binder (Red Bull KTM Ajo) was on pole for just the second time, out to take a fourth straight win of the season. The circuit roared to life as the 35 strong field jumped forward, the slipstream keeping them all close together.

Binder made a fantastic start and led into Turn 1, but found himself surrounded by rivals, just as he had in Mugello. The leading three looked to be breaking away from Binder, but he rallied and caught them within a few laps, leading across the line on lap 10 as a clear group of eight riders fought for victory. Five laps from the end disaster struck for Binder, Gabriel Rodrigo (RBA Racing Team) colliding with the rear of his KTM and sending them both wide. With three laps to go Binder looked to be out of contention, but a stunning move at the start of the last lap saw him take second. His lead shrinks by only five points, leaving Barcelona with a 44-point lead.

The race marked a return to form for Enea Bastianini (Gresini Racing Moto3), the Italian in contention from the start. Bastianini looked a shadow of his former title challenging self at the start of the season but was back to his best in Barcelona. He attacked and defended till the end, returning to the podium with third place and keeping his perfect podium record in Catalunya alive.

Action was intense throughout the race, the front eight eventually becoming the front five. Romano Fenati (SKY Racing Team VR46) was a man on a mission, out to recover after a technical issue destroyed his home race. The Italian was quickly inside the top five, in podium contention by lap eight, eventually finishing fourth ahead of teammate Nicolo Bulega (SKY Racing Team VR46). The last lap was classic Moto3 action, 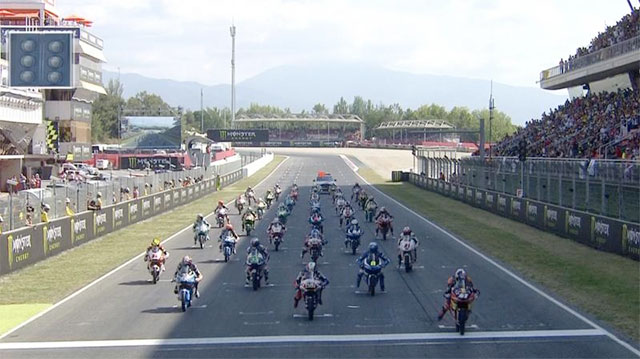 The Moto3 class leaves the grid
A number of riders fell on the first lap, Alexis Masbou (Peugeot MC Saxoprint) and Stefan Valtulini (3570 Team Italia) coming together with the latter remounting before retiring. At Turn 10 Adam Norrodin (Drive M7 SIC Racing Team) fell on the first lap as well.

Niccolo Antonelli (Ongetta-Rivacold) looked to be gaining on the front group after a poor start to the race from second. His comeback was cut short as he fell at Turn 15 on lap 15, just losing the front.

Jorge Martin (Aspar Mahindra Team Moto3) fell at Turn 2 towards the end of the race, walking away from a heavy fall.

Khairul Idham Pawi (Honda Team Asia) led lap 2, the slipstream helping the Malaysian to snatch the lead at the start of the race. Having been in contention for victory for much of the race, he crashed at Turn 10 on the 20th lap. He was soon followed by Gabriel Rodrigo who had had a similarly fantastic start to the race, leading for the first time in his career. The Argentinian slid off at Turn 1 on lap 21.