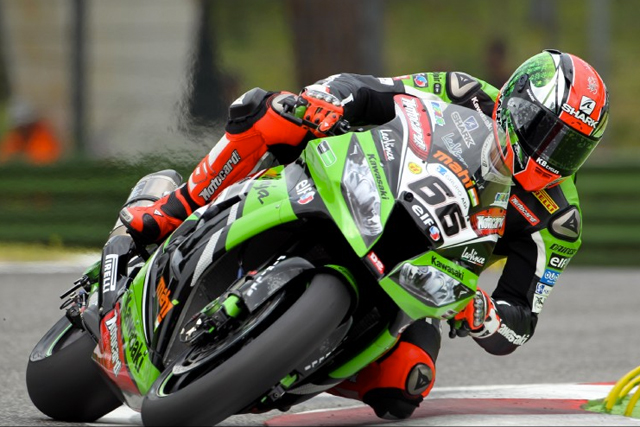 Kawasaki Racing Team's, Tom Sykes continued his untouchable form from qualifying into both 21-lap SBK races at Imola overnight, taking his second ‰Û÷double‰Ûª of the year and in the process, the British rider took the championship points lead.

This was Tom‰Ûªs second such double win in three rounds and with previous championship leader Sylvain Guintoli finding bad luck with a DNF in race one, and finishing third behind Tom in race two, Sykes now leads by six points after 7 of 15 rounds have been completed.

Sykes once more put in a perfect weekend, as he took both race wins, his sixth Superpole of the year, a new fastest lap in qualifying and a new lap record of 1‰Ûª47.274 in race one.

‰ÛÏI have had two perfect weekends out of the last three events and for this I am truly happy." Sykes stated. "I enjoy this circuit so we have made the most of it.

"A perfect weekend so it could not have been any better. It is a special weekend for many reasons and also the incident last year with my 2012 team-mate Joan Lascorz. There was not one time on any lap when I have exited turn six and not thought about his accident. We are all thinking of Joan and I hope that this is a small, small tribute to him.

"Both the ZX-10R and myself have been working well. I have every single individual member of the Kawasaki staff and teams to thank, and our great technical sponsors. Without their help I would not be able to showcase myself so I truly am grateful.

"Hopefully now this is a beginning of a challenge but we will see how we go.‰Û 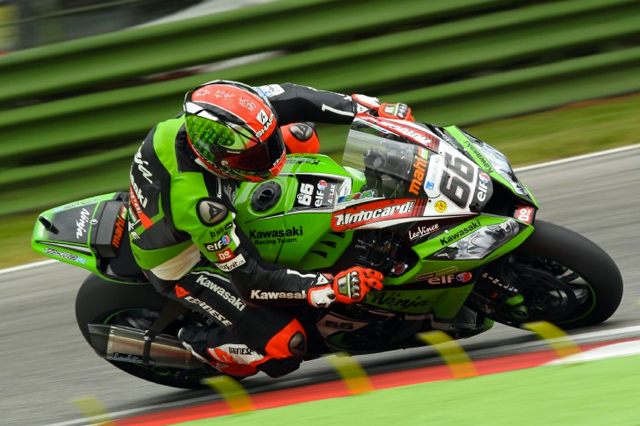 Tom Sykes claimed the championship lead after his win in race two - Credit: Kawasaki Racing
Sykes dominated race one at Imola. Starting from pole, he managed to pull away from 2nd place Davide Giugliano (Althea Racing Aprilia) halfway through the race, keeping a strong pace that only the young Italian was able to match, in the first part.

Sykes had a controlled approach in the early laps, making his way from 4th to the lead, then pulling away for victory. Giugliano did all he could to stay with the winner, eventually finishing a lonely second.

Eugene Laverty (Aprilia Racing Team) achieved a solid 3rd place ahead of Marco Melandri (BWM Motorrad GoldBet), as the Italian lapped close to his former team mate, but could not make the podium. The two riders saw a recovering Jonathan Rea (Pata Honda World Superbike) getting in the mix until the Ulsterman crashed out at turn 19, during the nineteenth lap, not long after he moved up to 4th place. Rea got the hole-shot at the start, before running wide at Turn 6 and rejoining in 11th position. 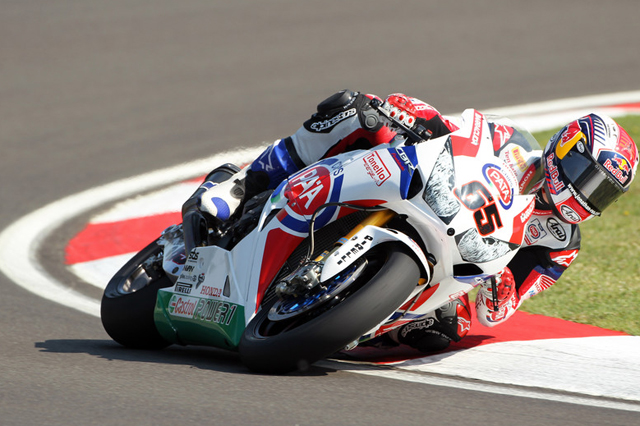 Jonathan Rea bounced back for a solid second place in race two after crashing out of race one - Credit: Honda Racing
Sykes completed a fantastic double-win at Imola, when the Hudderfield-born rider led every lap of race two to cross the line victorious for the 10th time in his WSBK career ‰ÛÒ and to secure his 5th win of 2013.

After the disappointment of the first race, Rea redeemed himself to end up a lonely second ahead of works Aprilia rider Sylvain Guintoli.

"Really mixed emotions today." Rea commented after moto 2. "We had really good pace all weekend, but not enough for Tom [Sykes] today, who seemed like he had something in reserve, especially when it got hot this afternoon. 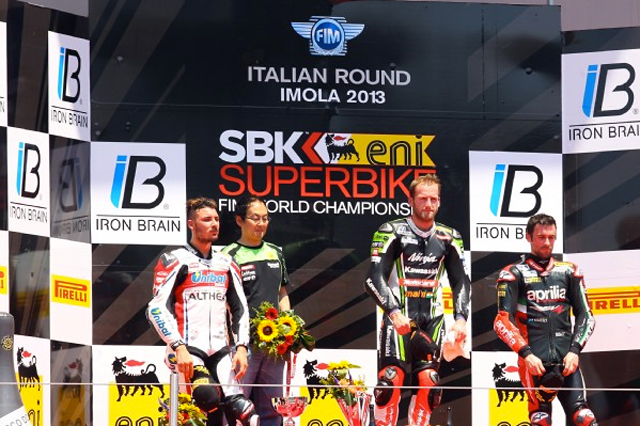 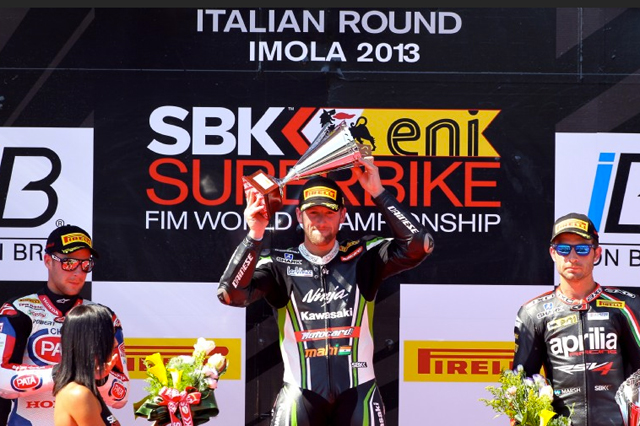 Top Image: Tom Sykes dominated the Imola round of the WSBK, winning both races from pole position
Credit: Kawasaki Racing