Sykes Doubles Up At Home With Rea Second 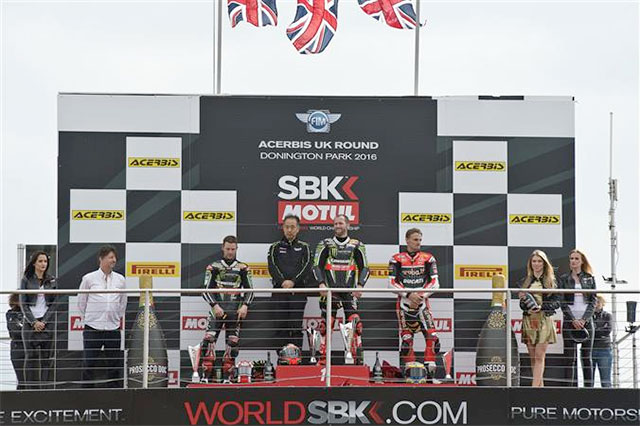 The remarkable winning record of Tom Sykes (Kawasaki Racing Team) and the Ninja ZX-10R at Donington Park has continued as Sykes won his second WorldSBK race in as many days, and his fourth of the year.

Fellow KRT rider Jonathan Rea was a close second for much of the 23-lap second race, continuing his 100% podium finishing record in 2016 at the end and maintaining a strong championship lead. He now leads his own team-mate in a KRT 1-2, as Sykes went second in the overall standings after his race two victory.

After the official Kawasaki riders shot into an early lead - Sykes from pole and Rea from the second row - there were only two riders competing for the win and each was on the new model Ninja ZX-10R. Rea set a new lap record of 1‰Ûª27.605 to get himself back into the slipstream of a fleeing Sykes on lap two, as the race settled into a high speed game of cat and mouse between the KRT team-mates.

With a handful of laps to go Rea made a pass on Sykes but in finding a false neutral into Goddards he lost ground that he would never quite make up as Sykes maintained a high and consistent pace right to the end. Feeling the effects of arm pump close to the end of the intense 23-lap race Rea eased up in the final few laps, with third place finisher Chaz Davies safely over two seconds behind him, and 4.437 seconds behind Sykes. 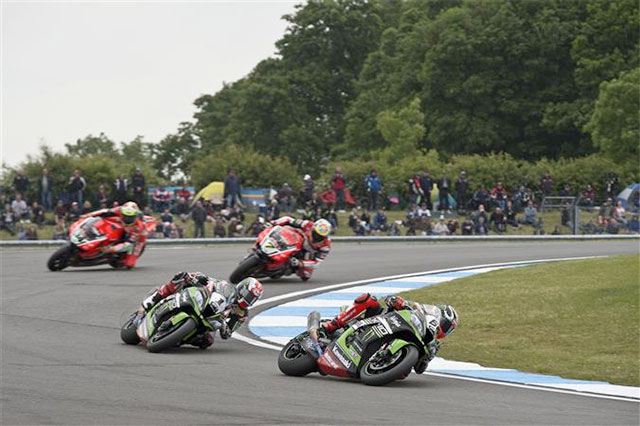 Tom Sykes leads Jonathan Rea
Sykes‰Ûª celebration over the finish line was obvious for all to see as he continued what has become a legendary run of race wins at Donington ‰ÛÒ eight in a row. A Superpole success and then a double race win made Donington yet another almost perfect race weekend for Tom, topped off by regaining second place in the championship.

‰ÛÏEight in a row at Donington feels fantastic and I am over the moon," an elated Sykes said. "I had a good start to race two and had good pace. For sure it was not perfect and for sure that is why we had a lot of pressure. We did a very good job and had to fight again, so it is more rewarding when you win like this.

"I am grateful to Kawasaki, Marcel, Danilo and all the boys in the garage because we have won three of the last four races, which is quite promising. We have won on some difficult circuits this year, physically and from a point of view of the types of tracks. Thailand, Sepang and two-times here ‰ÛÒ which is a circuit of two halves. Consistently, I think we are getting better. I am going to bed tonight thinking we have had a perfect weekend.‰Û 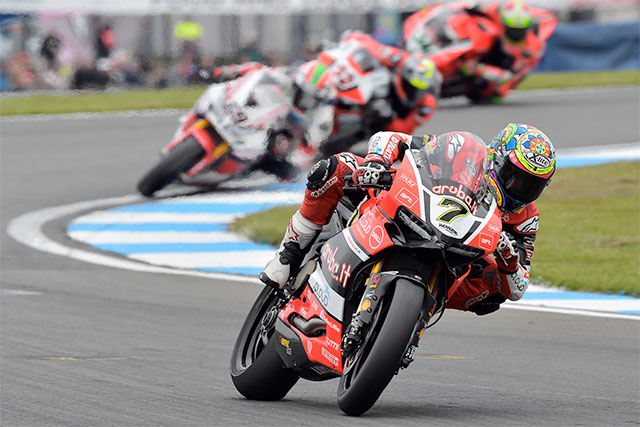 Chaz Davies stayed on track in race two and finished with a strong third
Chaz Davies, who finished Race 2 in third position. A result that partially comforts the Welsh rider and shows his resilience after the difficulties encountered on Friday and Saturday.

‰ÛÏIt‰Ûªs definitely good to step back on the podium after the difficulties we‰Ûªve encountered here in Donington," Davies said. "Most of all, it was important to score a positive result after not being able to finish the race yesterday.

"I think it all began with our problems on Friday, and yesterday I probably pushed a bit too hard, but we‰Ûªre here to win races and you have to give it a try when you‰Ûªre in the lead. We know we can do better, there are certainly a few aspects under which we can improve, but it was difficult to beat the Kawasakis on this track.

"Today, we‰Ûªve made some good progress also thanks to the data we gathered yesterday during the race, and the goal is to get to Misano in a different position. We‰Ûªll prepare the next round with two days of tests next week, and the first objective will be to improve our results from 2015.‰Û