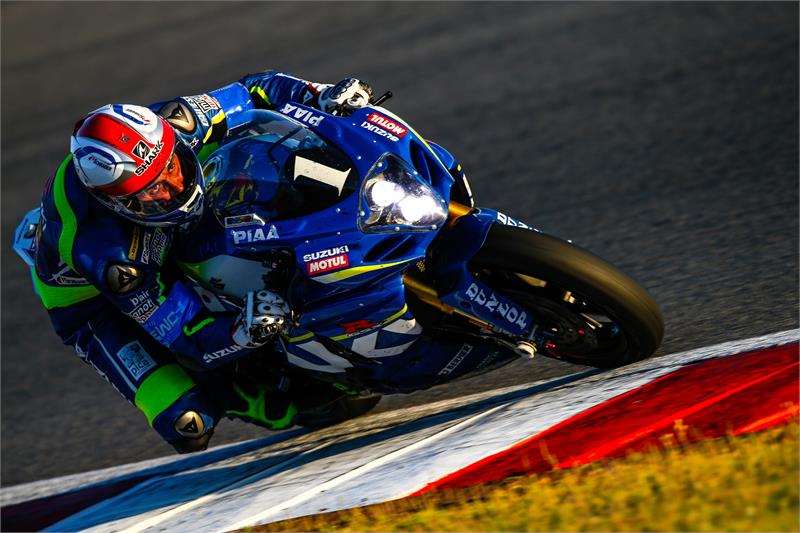 After 12 hours and 393 laps of intense and thrilling action, SERT‰Ûªs youngest team rider, 27-year-old Etienne Masson, crossed the line on the GSX-R1000 neck-and-neck with race winner David Checa after being given the final race stint with just over 30 minutes to go.

Masson and long standing team riders Vincent Philippe (38) and Anthony Delhalle (34) all rode consistently-fast on the tough and bumpy 4.592km circuit with a calculated race strategy by Team Manager Dominique MÌ©liand, that saw them come in for 12 pit-stops; one less than eventual winners GMT94 Yamaha. However, some of the fastest laps were set in the closing stages, in the dark, as Masson put the Yoshimura-powered GSX-R1000 into the low 1:47s.

From the start, SERT was always in the leading group. After starting from sixth position, the lead changed throughout and after early leaders SRC Kawasaki retired with a technical issue, it became a two-horse race between SERT and GMT94. When SERT pitted, GMT took the lead and vice-versa as less than 30 seconds separated them during most of the race.

But the action really hotted-up in the final hours as the gap came down between the leading pair; first it was Philippe versus Checa and when Philippe pitted with 33 minutes to go, handing over to Masson in a ‰Û÷splash and dash‰Ûª quick fuel top-up, the gap was down to under 12 seconds. It was then Masson versus Checa as GMT took the lead, but when the Yamaha pitted for a similar quick-refill and rear tyre change, Checa stayed to finish the stint and exited pit lane just 3.7 seconds behind the SERT Suzuki, that regained the lead at that very moment.

The final laps will be remembered as possibly one of the closest and most-exciting battles in Endurance World Championship history as the pair swapped the lead several times, dodged back-markers and crossed the line virtually neck and neck.

SERT Team Manager MÌ©liand was ever-gracious in defeat after witnessing such a spectacle.

‰ÛÏWe did everything we possibly could to win. I am disappointed not to win, of course, but we have to congratulate GMT94 today; and at the end of the day, the race was great!‰Û