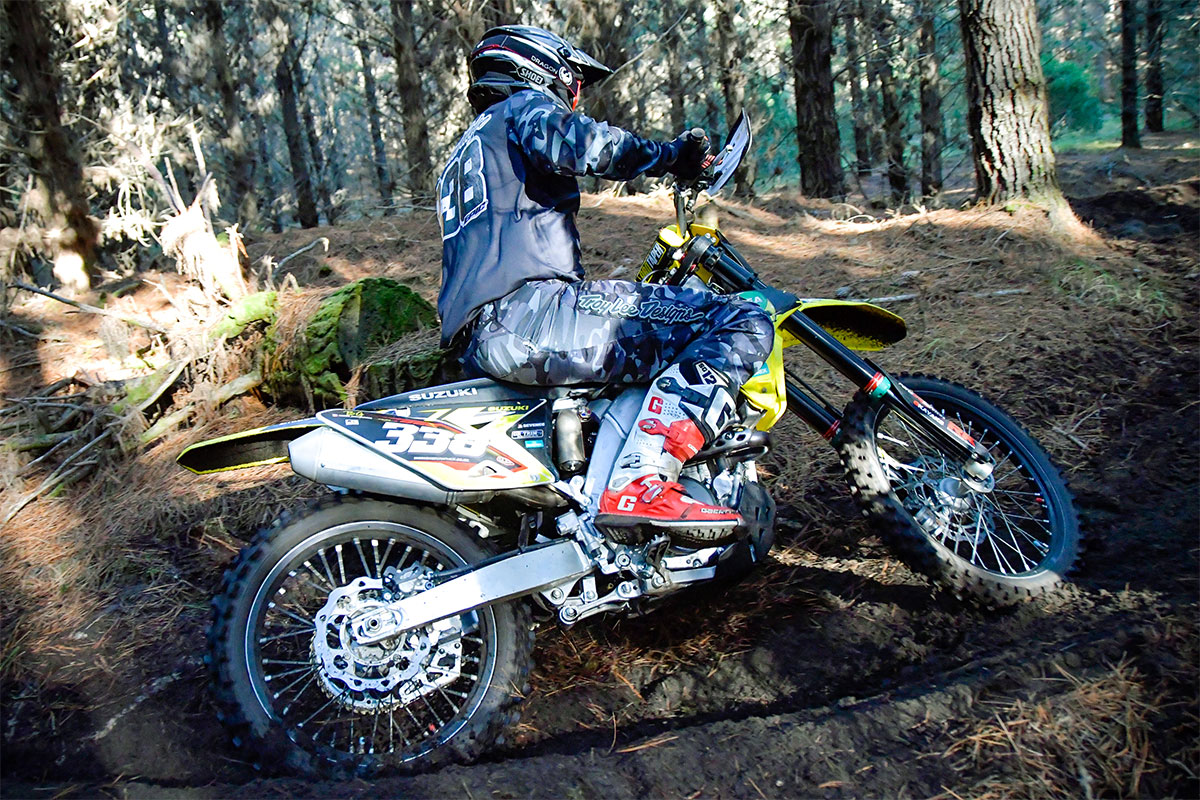 Truth is, his riding style is far from boring, although spectacular is not always the best way to tackle an enduro course and the Suzuki star is certainly an expert at that.

The Alpinestars-sponsored national series came to a thrilling conclusion with racing in the Santoft Forest, near Bulls, on Saturday, followed by the final round on farmland near Martinborough on Sunday and on both days Groombridge was a dominant force.

The 27-year-old Taupo locksmith took a brand new Suzuki RM-Z250 bike to win both days of the back-to-back rounds four and five of the New Zealand Enduro Championships in the lower North Island at the weekend.

And, apart from setting the brake and clutch levers to his preferred angle and applying his personalised graphics, he took the stock-standard bike and absolutely smoked the competition.

He was the series leader in the premier AA Grade (formerly called Expert Grade) after the first three rounds and so it was perhaps little more than a formality that he would continue on and add the 2018 title to the first national enduro title he won in his "first serious attempt" in 2016.

He finished runner-up in the enduro nationals last season, despite crashing out heavily at the series opener that year. It has been a golden run for the Suzuki man this season ‰ÛÒ he rode a Suzuki RM-Z250 to claim overall runner-up in the MX2 (250cc) class in the motocross nationals earlier this year, then wrapped up the 2018 national cross-country crown at the final round of that series near Mosgiel last month ‰ÛÒ making it three successive national cross-country title wins.

He secured the 2018 enduro crown with a round to spare on Saturday, his win at Santoft enough for him to collect the crown early after his nearest challengers, Jake Whitaker and Chris Power, struck problems in the pine forest.

Whitaker finished the day an unaccustomed seventh overall at Santoft and Power placed ninth overall on Saturday. This gave Groombridge a 26-point championship lead and, with a maximum of only 25 points available for a win at Martinborough, the Taupo man could therefore not be beaten.

Groombridge won the day at Martinborough anyway, stamping his authority on the sport and making history at the same time. It is believed to be the first time ever that one individual has finished on the podium in three separate motorcycling codes in the same season ‰ÛÒ motocross, cross-country and enduro.

"I knew I'd wrapped up the title after Saturday's effort and I didn't know whether the rules were that I still had to race on Sunday as well," said Groombridge. "So I raced Sunday anyway, just to be sure."

"There were a few riders missing from the champs this year and so there possibly could have been four or five of us fighting for the title. With them out, it made things a little easier, but I still needed to ride well and to finish each day to get the job done.

"I rode smart and didn't do anything too extreme.

"I want to race all three codes ‰ÛÒ the motocross, cross-country and enduro nationals ‰ÛÒ next year too. That's the plan anyway, if I'm not away racing overseas. We'll just have to wait and see."