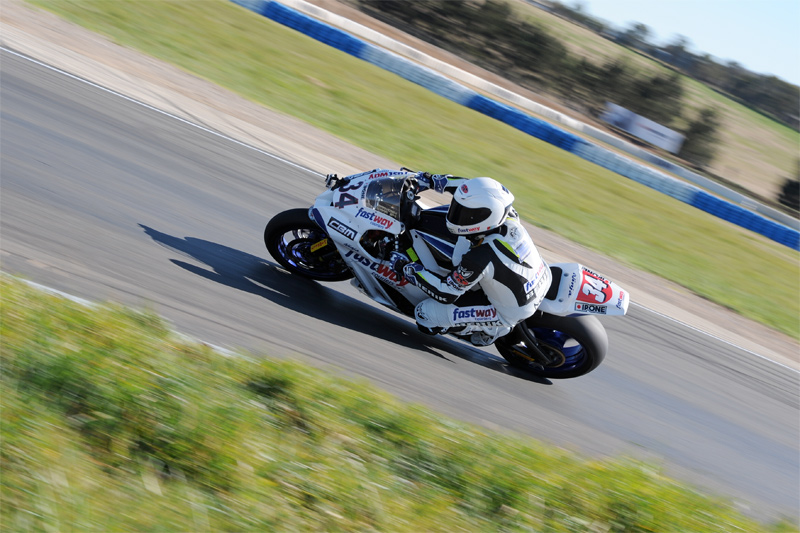 In the opening race of the day, Paul Byrne (LTR Honda) left from pole position and flew into the first corner, taking the inside line and the lead of the race.

He was hotly pursued by Ben Nicolson (NextGen Motorsports) and Brayden Carr (Fastaway Couriers), with Gas Honda Racing‰Ûªs Chris Trounson back in fourth.

But up front Byrne took control of the race ‰ÛÒ increasing his lead over Carr to nearly three seconds through six laps of the eight-lap race.

With one lap remaining a crash at turn eight saw the red flag produced and the race declared ‰ÛÒ Byrne taking a well-earned win ahead of Carr, Nicolson and Trounson.

Trounson got a great start in race two to take the early lead, with Byrne moving into second, Nicolson into third and Carr into fourth.

By the end of the opening lap Byrne had moved into the lead, while Carr had passed Nicolson into third.

Coming down the straight on lap number three, Carr moved into second spot and set about putting the moves on Byrne, looking at every opportunity to get past as the riders battled wheel to wheel.

Carr finally made the pass on lap six to take the lead and ended up riding away to a comfortable win from Byrne, with Nicolson in third, Matthew Harding in fourth and Trounson in fifth.

In the final race Byrne got of to a flying start ‰ÛÒ riding on the inside at the opening corner to take the lead.

It didn‰Ûªt last very long however as Carr displayed an incredible turn of speed to zip past him on his way to turn two.

Behind Byrne, Nicolson, Trounson and Harding battled for position, while up front Carr went about extending his lead.

By the half-way point of the race his lead was over a second to Byrne who was fighting hard to shake off a determined Nicolson.

With Nicolson forced off the track on lap six, Harding pressed his case for second spot, and on the final lap he managed to pip Byrne on the like to finish second on the podium.

Carr ended up winning by more than five seconds ‰ÛÒ doing enough to take the overall round win from Byrne with Harding in third.

In the overall championship points, Tounson holds a slender 14 point lead from both Carr and Harding heading into the final round at Eastern Creek in November.

The first race began in antil-climactic fashion when a rider when down on the opening lap, forcing the red flag to come out and sending riders back into the pits.

When the race was restarted it was Brandon Demmery (Noise Guard Racing) taking the lead from Kyle Buckley (Bcperformance Motogo), while usual suspects Rennie Scaysbrook (Kawasaki Motors Finance) and Kiwi Bailie Perriton were also in the mix.

It became a battle of two as Scaysbrook was forced out of the race when he crashed at turn ten on the third lap, while Perriton was handed a 15-second penalty for a jump-start.

Demmery and Buckley swapped positions for the lead multiple times throughout the race, but when they crossed the line to the chequered flag, it was Buckley with his nose in front taking the win.

Although Perriton was the third bike across the line, his penalty meant that Sophie Lovett (Lovetts Earthmoving) was able to grab a podium finish.

In the second race of the day it was again the combination of Demmery and Buckley out the front, with Demmery taking the lead and looking to ride clear.

Behind the pair were Lovett and Perriton and by the end of the second lap Perriton had moved into third place.

Demmery was not going to have it all his own way however, and over the next couple of laps Buckley stepped up the pressure.

But his efforts were in vain ‰ÛÒ Demmery setting a new 300cc lap record on the final lap of the race to take the win to reverse the standings from race one.

Perriton finished in third, with Lovett holding onto fourth from a fast-finishing Scaysbrook.

In the final race of the day, Demmery again got to the front with Buckley, Perriton and Scaysbrook in arrears.

The battle between the top two was intense once again, and Demmery and Buckley tested each other out throughout the race.

While it looked as though Demmery would hold onto his lead, Buckley again forced himself into the lead with a great passing move on the final lap to take the race win.

Buckley finished in second, while Perriton rounded out the top-three.

Buckley‰Ûªs three point round win over Demmery has given him a two-point championship lead heading into the final round, while Lovett is a fair way behind in third.

James Arnold (The Little Red Grape) got off to a great start in the opening race, shooting off the grid into the lead from Michael McMillan (McMillan Criminal Law) and Simon Galloway (Cessnock Motorcycles).

McMillan pushed Arnold and on lap three made the pass to move his Aprilia into the lead ‰ÛÒ a lead that he comfortably held onto for the rest of the race.

In the end he finished 1.699 seconds clear of Arnold, while Galloway was a further 3.445 seconds behind in third.

In the second race it was McMillan taking the early lead, with Arnold and Galloway in second and third.

The trio had a fair gap between each other for most of the race, and McMillan pulled away to record a 1.461 second win over Arnold, with Galloway a further 6.121 seconds behind in third.

He couldn‰Ûªt complete the trifecta however, as the final race saw Galloway claim the narrowest of race wins.

He finished the final race lass than a second ahead of Arnold and McMillan to take the chequered flag in first, while his third placing was enough to hand McMillan the round win.

In the overall series points, Galloway holds an 11-point buffer over Arnold heading into the final round.

Adrian Pierpont and Richard Draper (Sugar Plum Racing) were the only two Nakedbike riders to take the field in race one, after a crash in practice on Friday ended series leader Angus Reekie‰Ûªs (KTM Racing) weekend.

Pierpoint had a comfortable lead over Draper in the race until lap three when he came off the track and re-entered behind the Honda rider.

A lap later he was back in front and by the end of the race was nearly 15 seconds clear of Draper, taking an impressive race win.

Race two in the Nakedbikes saw Pierpoint in front of Draper at the first turn, and it was a lead that he never surrendered.

Pierpoint finished a lengthy 26 seconds ahead of his rival taking his second class win for the day.

He backed that up in the final race beating Draper by nearly 45 seconds tin race three.

As each rider was competing in separate Nakedbike classes they effectively each won their respective classes for the day.

Pierpoint now holds a 13-point lead over Reekie heading into the final round.

Just one race was held for the day in the FX Challenge Cup with three riders competing, and it was BikeBiz pilot Sean Condon who crossed the line first.

He received 25 points to extend his lead in the A&B grade of the class, while Kiwi Ryan Hampton claimed maximum points in the C&D grade.

Hampton finished ahead of Jason Ivkovic, who now holds a slender six-point lead over his New Zealand rival heading into the final round.

Four riders took to the track for the opening Electric Bike race at Wakefield Park, and it was Danny Pottage (O‰ÛªHanlon Electric Motorsports) who lead the way in early.

Pottage opened up a fair gap on his rivals, and by the time the chequered flag was raised he had built up an 11.328 second gap on second place finisher, Daniel Ripperton (Ripperton Racing).

The second race of the day finished with riders in exactly the same order, with Ripperton six seconds behind Pottage.

The result gives Pottage a 31-point lead heading into the last round.